Jan. 24, 1962 - President Kennedy urged the American public again today to put its faith in the American cow and keep on drinking milk. His press secretary, Pierre Salinger (pictured), made the same point to the reporters who cover the White House, offering them milk at the President’s news conference. The net result of the day’s dairying on the New Frontier was to defend milk against charges of contamination by radioactive fallout and to defend the dairy farmer against the i

Jan. 24, 1962 - Mrs. Jacqueline Kennedy’s press secretary pointed out today that the First Lady wore American-made clothes practically all the time. The comment by the press secretary, Pamela Turnure, was in reply to Mrs. Clare Boothe Luce’s recent criticism of Mrs. Kennedy for buying French clothes. Mrs. Luce served as a Republican in Congress in the 1940s and was U.S. Ambassador to Italy during the Eisenhower Administration. She is the wife of Henry Luce, publisher of Time,

Jan. 24, 1962 - President Kennedy vigorously defended two State Department employees today against a newspaper woman’s statement that they were security risks. He delivered an icy rebuke to the reporter, Mrs. Sarah McClendon (pictured right), when she made the accusation at his news conference. He vouched personally for the two men and said he hoped they could continue to serve “without detriment to their character by your question.” Mr. Kennedy had never been so quick and se

Jan. 21, 1962 - President Kennedy said last night that the Democratic party would win the 1962 elections if it ran “as a party of progress as it always has.” The President told more than 5,000 cheering Democrats at a party dinner on the first anniversary of his inauguration that the time to begin the Congressional election campaign was now. The President flew to Washington from New York yesterday to speak at last night’s $100-a-plate dinner. The proceeds will go to assist Dem

Jan. 19, 1962 - President Kennedy entertained composer Igor Stravinsky (right) at a small White House dinner last night. Mr. Stravinsky, Russian-born, is now a citizen of the United States. He is in Washington this week to conduct the Washington Opera Society in three performances of his opera “Oedipus Rex.” The guests, in addition to Mr. and Mrs. Stravinsky, included Leonard Bernstein, conductor of the New York Philharmonic, and Mrs. Bernstein; Princess Stanislas Radziwill,

Jan. 18, 1962 - Republican leaders viewed the Administration’s legislative and budgetary proposals today as power-building projects. “President Kennedy is heading us toward the leviathan state,” said Senator Everett Dirksen of Illinois (pictured), the minority leader in the Senate. The New Frontier, he said, “has turned out to be nothing more than a bright ribbon wrapped around the oldest and most discredited political package on earth — the centralization of power.” “Nothing

Jan. 18, 1962 - President Kennedy presented his first complete budget to Congress today. It was balanced, as he had pledged, and it provided for further enlargement of the New Frontier. He estimated that for the fiscal year 1963, which begins next July 1, the Government’ books would show these totals: Spending — $92,537,000,000. Revenues — $93,000,000,000. The spending would be the highest of any peacetime year and the revenues the highest ever. “In my judgment,” the Presiden

Jan. 17, 1962 - President Kennedy today proclaimed May 1 as “Law Day, U.S.A.” He called on the American people to observe it with appropriate programs and ceremonies. The President said that just as freedom demanded constant vigilance, it was essential that this nation nurture an appreciation of values of justice and foster “an increased respect for law and for the rights of others as basic elements of our free society.” The rule of law, the proclamation said, is one of the v

Jan. 15, 1962 - Following are the main points from President Kennedy’s news conference today: Science and Technology - He expressed growing concern about an inadequate supply of scientific and technical manpower in this country and called for steps to develop more. Foreign Policy - He denied that American troops were in combat in Vietnam. He also defended Administration policy toward the Congo, toward the Berlin wall, and toward the proposed coalition government in Laos. Civi

Jan. 12, 1962 - President Kennedy borrowed a dime today to help promote this year’s March of Dimes campaign. The President posed for photographs in his office with Debbie Sue Brown, 5 years old, of Clarkston, Wash., national poster child for the drive to raise money to fight crippling diseases. A photographer asked Mr. Kennedy if he would put a dime into a March of Dimes coin collector brought along with Debbie Sue. “If I can borrow one from one of you gentlemen,” the Preside 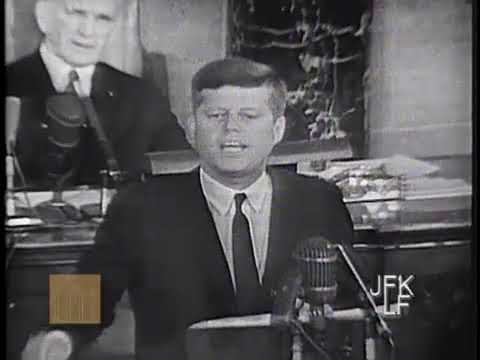 Jan. 11, 1962 - President Kennedy asked the 87th Congress today to give him new authority to reduce tariffs, cut personal income taxes in an economic emergency, and strengthen the welfare programs of the nation. In a confident State of the Union message that gave unusual emphasis to economic and welfare issues rather than military measures, the President called for a low-tariff trade partnership with the free world and a domestic program designed to improve the nation’s econo

Jan. 9, 1962 - The White House rose garden rang with clear alto and soprano voices today as the Vienna Boys Choir serenaded President Kennedy. The President stepped out to greet the well-disciplined Austrian youngsters, who are on a three-month tour of the United States. He expressed his “great pleasure and satisfaction in having this distinguished chorus here,” and bade them a “very warm welcome to the President’s house.” When the serenade was over, Mr. Kennedy led the appla

Jan. 6, 1962 - President Kennedy told Ohio Democrats tonight that his Administration was pledged to progress, particularly in the fields of medical care and education. “In the Congress of the United States this year, we are going to add programs that will serve our people,” Mr. Kennedy promised. He spoke to more than 3,000 diners at a $100-a-plate dinner honoring Ohio Governor Michael V. DiSalle on his 54th birthday. Mr. Kennedy’s speech was a partisan effort in which he pict

Jan. 5, 1962 - President Kennedy plans to deliver his annual State of the Union Message next Thursday before a joint session of Congress. Tonight the President traveled to Washington from West Palm Beach, Fla., ending an 18-day stay. The President cut short his Florida vacation to hold White House conferences this weekend on domestic and international issues. He will also fly to Columbus, Ohio, tomorrow afternoon to address a Democratic fund-raising dinner marking the birthda

Jan. 3, 1962 - President Kennedy took Vice President Johnson and top Defense aides on a luncheon cruise today, and Mrs. Kennedy gave them a display of her water-skiing ability. The trip aboard the Presidential yacht Honey Fitz followed Mr. Kennedy’s morning conferences with his military advisors. The highlight of the cruise was Mrs. Kennedy’s five-minute performance on the skis shortly after the yacht had sailed into deep ocean water off Palm Beach. She made a perfect circlin

Jan. 2, 1962 - One-year-old John F. Kennedy Jr. went to see his ailing grandfather in the hospital today for the first time. Mrs. Kennedy took John and his sister, 4-year-old Caroline, to St. Mary’s Hospital in West Palm Beach to visit the President’s father, Joseph P. Kennedy, who has made some improvement after suffering a stroke on Dec. 19. Caroline had been in the 73-year-old former Ambassador’s suite before. Their mother took them home shortly before the President arrive

Jan. 1, 1962 - Joseph P. Kennedy, the President’s father, is beginning to spend part of each day out of bed. He sat in a wheelchair for awhile yesterday and watched part of the football game between the New York Giants and the Green Bay Packers. The 73-year-old former ambassador to Britain, who suffered a paralytic stroke two weeks ago, can hear and is perfectly alert mentally. President Kennedy attended a 5:30 p.m. mass today and visited his father in a West Palm Beach hospi

Dec. 31, 1961 - President Kennedy and Premier Khrushchev, in an exchange of New Year’s greetings made public today, assured each other of a firm resolve to find a durable peace in 1962. Wishing the Russian people “a peaceful and prosperous New Year,” Mr. Kennedy expressed the hope that 1962 “will bring an improvement in the relations between our countries, upon which so much depends.” The Soviet Premier wished “peace and happiness” to all Americans and to the President and hi
1
2345