Mar. 31, 1962 - The steel industry and the United Steelworkers of America announced agreement today on new contract terms. President Kennedy said the terms were “obviously noninflationary and should provide a solid base for continued price stability.” The accord settles the nation’s major collective bargaining problem of the year. It will provide a pattern for settlements covering thousands of workers in steel fabricating, aluminum making, and can-manufacturing plants. Presid

Edward M. Kennedy Admits Cheating at Harvard in 1951, Was Asked To Leave

Mar. 30, 1962 - Edward M. Kennedy, a candidate for a Democratic Senate nomination, admitted today that he had withdrawn from Harvard College as a freshman in 1951 at the college’s request. In a statement, Mr. Kennedy said that the reason was that he had “arranged” to have a classmate take an examination in his stead in a Spanish course. Rumors that the President’s brother had been asked to leave Harvard under a cloud had been gathering since before the formal announcement of

Mar. 30, 1962 - Sitting on benches on an outdoor basketball court, nearly 1,200 prisoners captured in the invasion of Cuba last April went through the second day of their military trial today. Morning newspapers said they had already “admitted their guilt.” Western newsmen were barred from the proceedings. Pictures in Havana newspapers showed row after row of prisoners in white shirts and denim trousers seated in the basketball court within the compound of Principe Prison. #P

Mar. 30, 1962 - President Kennedy today nominated Byron R. White (left), the Deputy Attorney General, to be an Associate Justice of the Supreme Court. Mr. White is 44, an unusually young age for a Supreme Court appointee. He comes from Denver, where he was in private law practice for 13 years before joining the Kennedy Administration in January 1961. He has known the President since they met in England in 1939. They were together for a time during World War II, when Mr. White

Mar. 29, 1962 - Mrs. Jacqueline Kennedy arrived home tonight from her journey abroad. The President was at National Airport to meet her when the Caroline, the family’s plane, landed at 7:28 p.m. As soon as the steps of the aircraft were lowered, the President entered the plane and greeted her. A few minutes later, they descended the steps together and Mrs. Kennedy shook hands with the Indian Ambassador, B.K. Nehru, and his wife and with the Pakistani Ambassador, Aziz Ahmed, a

Mar. 29, 1962 - Following are the main points of President Kennedy’s press conference today: Supreme Court — He announced the retirement of Associate Justice Charles Evans Whittaker because of illness. Tests — He said efforts to achieve a nuclear test ban agreement seemed to have reached a “real impasse” because of Soviet rejection of inspection. China — He discouraged the idea that the U.S. would support Chiang Kai-shek in an attempt to put a force on Chinese mainland. #JFK

President Kennedy Will Be "Glad To Debate" in 1964

Mar. 29, 1962 - President Kennedy apparently disposed today of any doubts that he planned to seek a second term in 1964. At the President’s news conference, a reporter pointed out that Mr. Kennedy’s Republican opponent of 1960, former Vice President Richard M. Nixon, had indicated in his book, “Six Crises,” that Mr. Nixon believed he had won three of their four television debates. The President was asked whether he thought future debates were advisable. “I would think that it

Mar. 29, 1962 - Approximately 2,000 people a week are leaving Cuba. All commercial planes bound for Miami, Mexico City and Kingston, Jamaica are full, and lines of people can be seen every day at the airline offices in Havana waiting to leave the country. The refugees must forfeit all their money and almost all their possessions. They are allowed to take only a minimum of clothing, one pair of shoes, one watch and one ring or a pair of earrings. Everything they leave behind i

Mar. 29, 1962 - The Castro Government put 1,182 prisoners on trial today behind closed doors at Principe Prison, in Havana’s suburbs. The official charges against the prisoners, captured after last April’s unsuccessful invasion, were not disclosed. The Havana radio said the prisoners were accused of having carried out a “treacherous attack” against the Cuban people at the “direct instigation of the imperialistic Government of the United States.” The Government would not let t

Mar. 29, 1962 - Justice Charles Evans Whittaker (pictured) retired from the Supreme Court today on his doctors’ advice. He said in a statement that the “great volume and continuous stresses of the court’s work” had brought him to the “point of physical exhaustion.” He said his doctors had warned him that staying on the court would jeopardize his health. Justice Whittaker, who was appointed to the Supreme Court by President Eisenhower in 1957, had been missing from the bench f

Mar. 28, 1962 - The Chairman of the U.S. Joint Chiefs of Staff, Gen. Lyman Lemnitzer, flew to the village of Binh Hung in South Vietnam today to discuss problems with a soldier-priest. Most of the 1,200 residents of the village and the Sea Swallows, their force of irregulars, and their commander, the Rev. Nguyen Lac Hoa (pictured center), turned out to meet the general. “This is an example for the entire Free World to emulate,” General Lemnitzer said. “Against this kind of co

Mar. 28, 1962 - Mrs. Jacqueline Kennedy was greeted with cheers and wolf whistles today when she drove to Buckingham Palace for lunch with Queen Elizabeth II. “I had a wonderful English lunch,” Mrs. Kennedy said later. She said she and the Queen had talked “mostly about India,” which the First Lady visited this month and the Queen last year. A crowd around the home of Mrs. Kennedy’s sister, Princess Lee Radziwill, cheered when President Kennedy’s wife emerged, wearing a red w

Mar. 27, 1962 - Democrats are planning a May 19 New York Birthday Salute to the President that is expected to wipe out the last $500,000 of the party’s 1960 national campaign deficit of more than $2.5 million. The tribute to President Kennedy, to be held at Madison Square Garden, is billed as a million-dollar evening of entertainment and fun. The Democratic New York state organization will also share in the proceeds from the party, at which leading stage, screen, and televisi

Mar. 26, 1962 - Mrs. Jacqueline Kennedy arrived in London by air tonight for a three-day private visit. She was accompanied by her sister, Princess Lee Radziwill. She was greeted by Lord Nugent, representing Queen Elizabeth II; the U.S. Ambassador, David K.E. Bruce, and Mrs. Bruce; and the First Lady’s brother-in-law, Prince Radziwill, with whom she will stay in London. Prince Radziwill is a naturalized British subject who uses his Polish title, although it is not recognized

Mar. 26, 1962 - The Republican National Committee criticized today a Secret Service request for 58 more agents to protect President Kennedy than were needed for President Eisenhower. In its publication, “Battle Line,” the committee asked if this request had anything to do with Mr. Kennedy’s “penchant for commuting from Hyannis Port, Palm Beach, Newport, and Middleburg.” It said: “In addition, expeditions such as Mrs. Kennedy’s safari into India required, in the words of Treas 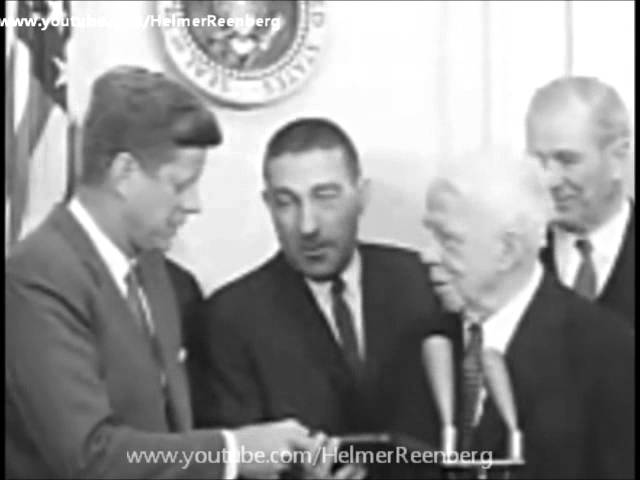 Mar. 26, 1962 - A comprehensive plan to pacify South Vietnam has started modestly in the forests north of Saigon. Last Thursday, Vietnamese forces under Brig. Gen. Van Thanh Cao (pictured right with Lieutenant Colonel John Paul Vann) began mopping up groups of Viet Cong Communist guerrillas in Binh Duong Province. This was the start of Operation Sunrise, which American observers have called the “first aggressive action against the guerrillas that made any sense.” What made th

Mar. 26, 1962 - At least 50 French civilians were killed and about 150 wounded in Algiers today as French Army forces clashed with European demonstrators. Doctors at the city’s principal hospital said about 40 of the wounded would probably die. They said the victims included many women and children. It was one of the bloodiest days Algiers has seen in seven years of war and seven days of cease-fire. The shootings started shortly after several thousand men and women had gather

Mar. 25, 1962 - A little old lady in black almost asked President Kennedy to move over at church this morning in Palm Desert, Calif. The President (pictured after mass outside the church) had already taken his seat at the Sacred Heart Roman Catholic Church when an unidentified woman paused in the aisle by his pew. She was looking for a seat and obviously was about to ask Mr. Kennedy to make room. Before she could do so, the Secret Service moved in. The President’s guards try

Mar. 25, 1962 - After riding an elephant last week near Jaipur, India, Mrs. Jacqueline Kennedy took a ride today on a camel led by Bashir Ahmed, the Pakistani who toured the U.S. last fall as the guest of Vice President Johnson. The five-year-old camel and his beaming driver were introduced to the First Lady in the garden of the residence of President Mohammad Ayub Khan in Karachi. This was one of the last events in Mrs. Kennedy’s two-week tour of India and Pakistan. She is s
1
2345