Mar. 24, 1962 - Princess Lee Radziwill said today that she and her sister, Mrs. Jacqueline Kennedy, had ordered karakul hats like the one (pictured) worn by Mrs. Kennedy today. Mrs. Kennedy was wearing a black karakul hat, called an astrakhan, given her by President Mohammed Ayub Khan. The Princess is accompanying her sister on the trip to India and Pakistan. Princess Radziwill called the hats “so fabulous and beautiful they may well become the fashion.” A merchant said Mrs.

Mar. 24, 1962 - While campaigning for Governor of California in the southern part of the state yesterday, former Vice President Richard M. Nixon was asked how he liked having the President and his brother, Attorney General Robert F. Kennedy, in the state. Attorney General Kennedy was in the state to address an anti-crime convention in Los Angeles. “We welcome them,” Mr. Nixon said. “In November, we are going to show these carpetbaggers a thing or two.” Mr. Salinger replied at

Mar. 24, 1962 - President Kennedy and General Dwight D. Eisenhower met in Palm Desert, Calif., today for a 51-minute chat that ended with a military salute by the General. “It was a general discussion of the situation around the world,” Pierre Salinger, White House press secretary, said later. “The President brought him up to date on a number of subjects, basically international,” he said. The two men talked at former President Eisenhower’s cottage at the El Dorado Country Cl

Mar. 24, 1962 - Two live sheep were presented to Mrs. Jacqueline Kennedy today by tribal chieftains at the foot of the historic Khyber Pass in Pakistan. In the custom of the Pakistani Northwest Frontier the wife of President Kennedy touched the heads of the sheep with her right hand. This indicated that she had accepted the animals, which were draped in silks and festooned with Pakistani and U.S. flags. The chieftains also gave her a dagger in a silver sheath and a leather sa 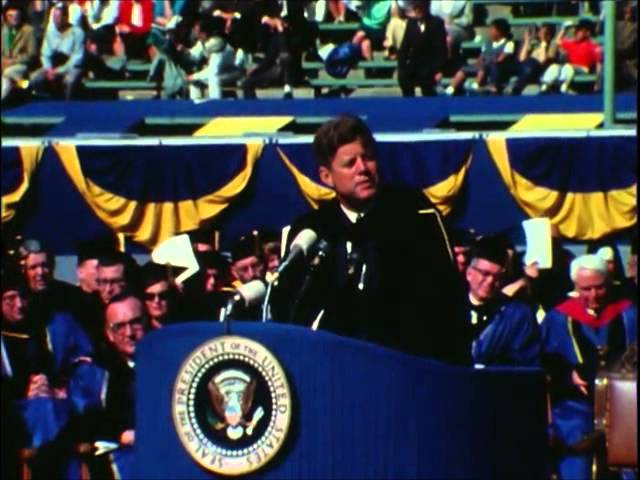 Mar. 23, 1962 - Critics and defenders of Administration policies stuck to plans to picket President Kennedy’s visit to the University of California at Berkeley today. About 200 youths out of the total Berkeley student body of 22,000 sat silent, some reading newspapers, in front of a big poster lettered: “Mr. President: for humanity’s sake, we oppose all nuclear testing.” Perhaps 300 critics of the Administration, carrying nearly 100 signs, marched up the hill to Memorial Stad

Mar. 23, 1962 - President Kennedy said today that the democratic world could look forward to the future with “a new confidence.” The tide of history, he asserted, favors freedom over totalitarianism. Mr. Kennedy sounded his note of optimism before a crowd of 86,000 persons gathered in the University of California’s football stadium in Berkeley. “The wave of the future is not the conquest of the world by a single dogmatic creed,” he declared, “but the liberation of the diverse

Mar. 23, 1962 - One of the battles being fought in South Vietnam involves the problem of finding out what is going on and reporting it to the American people. Many correspondents in Saigon feel they are losing. One put it this way: “The Vietnamese Government is against us. They figure we are all spies or Communist propagandists. The United States side will not tell us much beyond the broad outlines of policy, and we cannot even be sure of that. After prying for weeks to get a

Mar. 23, 1962 - President Kennedy witnessed a successful launching of an Atlas-D missile at Vanderberg Air Force Base in California today. Mr. Kennedy watched from a vantage point 6,000 feet away as the slim white missile rose and arched away on a course that took it more than 5,000 miles into the Pacific. Mr. Kennedy’s only recorded comment was: “McHugh is saved.” This was a joking reference to Brig. Gen. Godfrey T. McHugh, the President’s Air Force aide, who had assured him

Mar. 23, 1962 - President de Gaulle ordered today the “pitiless” repression of “the armed insurrection” in Algeria. He declared that “everything must be done immediately to smash and punish the criminal action” of the Right-wing European terrorists in Algiers and Oran. The President of France gave every indication that he was furious over the attack against the French Army by terrorists of the Secret Army Organization (OAS). This attack caused widespread shock to a large exte

Mar. 22, 1962 - Marian Anderson, the contralto, exchanged mementos with President Kennedy today. Their meeting preceded a concert she gave in Washington tonight for top officials and diplomats. Miss Anderson presented Mr. Kennedy with her latest record, “Spirituals,” and received a reproduction of the Inauguration emblem in return. After a brief visit with the President, she had lunch with wives of Cabinet members. Miss Anderson said she did not expect the President to attend 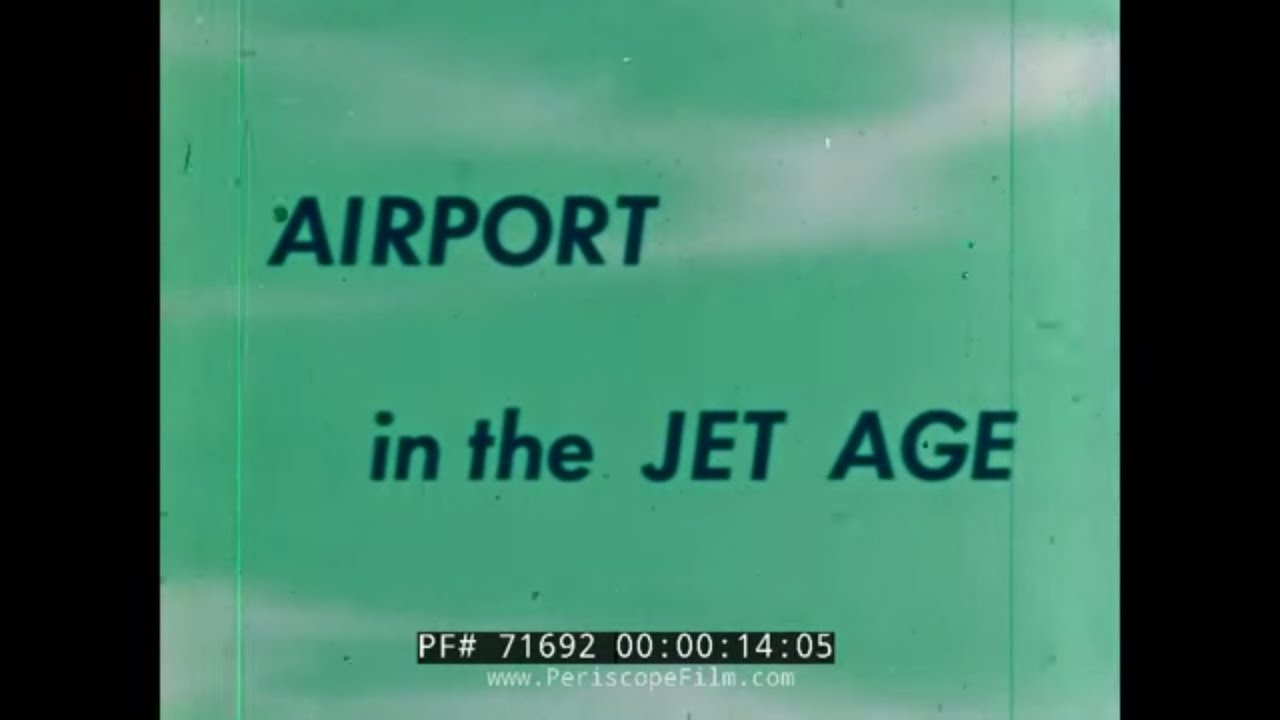 VIDEO: "Airport in the Jet Age"

Mar. 22, 1962 - The Air Force ejected a bear strapped inside a capsule from a B-58 traveling 870 miles an hour at an altitude of 35,000 feet yesterday. The bear and the capsule parachuted to earth unharmed 7 minutes and 49 seconds later. It was the first time in the series of such tests that a living animal had been ejected at supersonic speed. A bear was used because it is nearly the weight of a man. The new capsule, a clamshell closure around an ejection seat, is designed t

U.S. Officials: Tide May Be Turning in Vietnam

Mar. 22, 1962 - United States authorities are cautiously optimistic that the tide may soon start turning against the Communists in South Vietnam’s guerrilla warfare. On his way back from Honolulu, Defense Secretary Robert S. McNamara said that American aid has enabled the South Vietnamese to go on the offensive in the guerrilla fighting. Experts on the scene said fighting had increased sharply throughout the country. A Pentagon spokesman said Gen. Paul D. Harkins (pictured le

Mar. 22, 1962 - Mrs. Jacqueline Kennedy received a horse today from President Mohammad Ayub Khan of Pakistan. She also saw the Shalamar Gardens, of which she said: “It’s even lovelier than I dreamed.” Mrs. Kennedy spent an hour and a half at Lahore’s biggest social event of the year, the Pakistani National Horse and Cattle Show. Mrs. Kennedy gave some indication of her reaction to the hospitality shown her when she stood for 30 seconds before a microphone in the 320-year-old

Mar. 22, 1962 - East German policemen fired at a car of the U.S. military mission attached to Soviet forces in East Germany, an Army spokesman said today. The two occupants of the vehicle, an Army officer and his driver, were unhurt, although the car was struck by several bullets. Informed Allied sources said the policemen signaled the U.S. Army car to halt while it was traveling on a public highway. The Americans stopped, but the officer immediately demanded that a Soviet re

Mar. 21, 1962 - Richard M. Nixon declined today in the face of a Presidential denial to alter his contention that Senator John F. Kennedy (pictured with Allen W. Dulles in July 1960) had taken advantage in the 1960 campaign of confidential C.I.A. briefings on Cuban invasion preparations. The former Vice President’s assertion was made this week in a magazine excerpt from a forthcoming book, “Six Crises.” He said today: “President Eisenhower [now vacationing at nearby Palm Dese

President Reflects on Plight of Reservists

Mar. 21, 1962 - President Kennedy (pictured aboard the PT-109 in the South Pacific in 1943) commiserated today with impatient Reservists who were mobilized in the Berlin crisis last fall and now are clamoring to be released. “There is always inequity in life,” the President observed philosophically at his news conference. Some Reservists, he noted, had been called back to active duty even after apparently fulfilling their military obligations, while others continued a “normal

Mar. 21, 1962 - The Administration bill to add medical care for the aged to the Social Security system has a “good chance” of passage this year, President Kennedy indicated today. At his news conference, Mr. Kennedy rebuked those who argue that his bill would be the opening wedge for socialized medicine. On that point, Mr. Kennedy declared with some emphasis: “Well, it’s an old argument, when a case is lost, to argue that it’s all right here, but what’s it going to mean for t

Mar. 21, 1962 - Following are some of the highlights of President Kennedy’s press conference:  Space — The President said he was “gratified” at the interest expressed by Premier Khrushchev in space cooperation. Cuba — The President said the U.S. would defend itself if it were attacked anywhere, but that he had no information about a threat to the naval base at Guantanamo Bay in Cuba. Geneva — He said that the disarmament talks should continue, but he noted a “basic difference
1
2
345