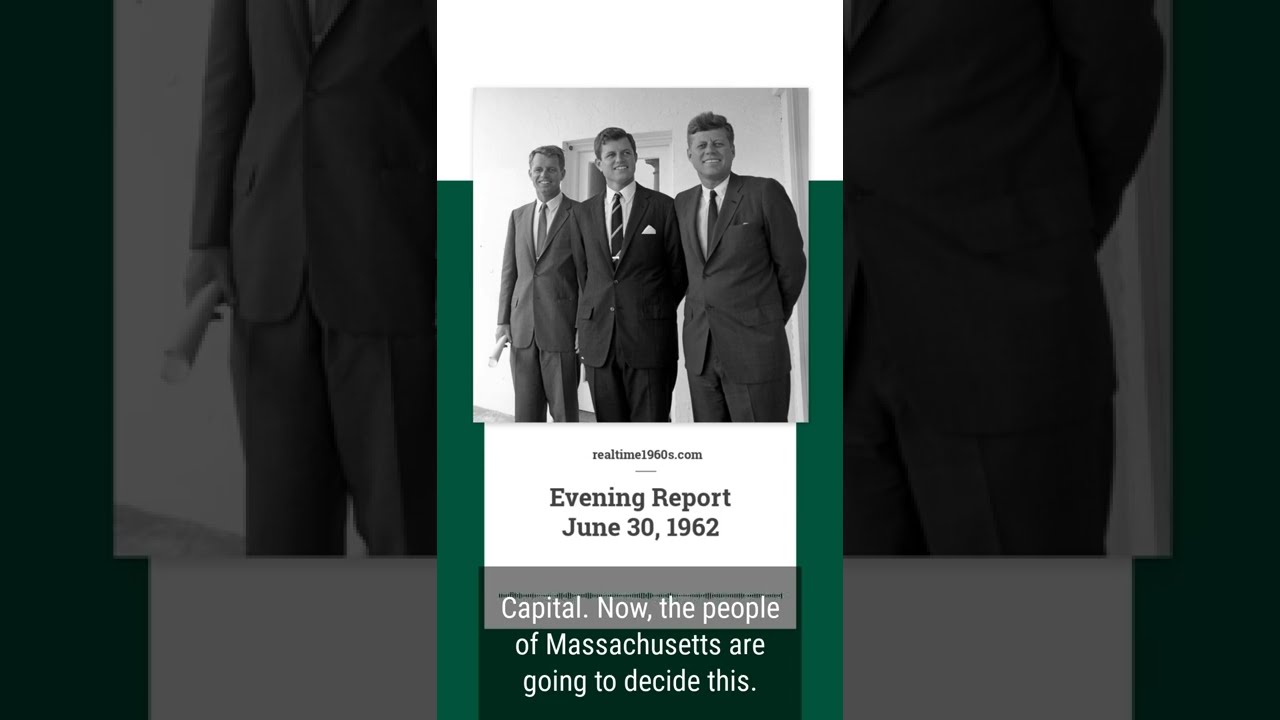 June 30, 1962 - A reporter asked President Kennedy today if the election of his brother Edward to the Senate would mean "too many Kennedys" in Washington. Full news report here: https://bit.ly/3nqaTMO 🎙 #JFK #election #politics

June 2, 1962 - John B. Connally Jr. (pictured), a conservative Democrat who was formerly Secretary of the Navy, won his party’s nomination for Governor of Texas in a run-off primary today. On the basis of unofficial returns from all 254 of the state’s counties, Mr. Connally polled 564,276 votes to 538,223 for his liberal Democratic rival, Don Yarborough of Houston. Mr. Yarborough, a 36-year-old lawyer who ran as a supporter of President Kennedy and the New Frontier, made it c

Jan. 25, 1962 - Richard M. Nixon walked through the Mission district of San Francisco today bidding for votes in his campaign for Governor. The former Vice President stopped passers-by, shook hands, spoke a few words of Spanish, and generally left a trail of smiles. “He’s terrific” and “a great guy” were heard as the Republican candidate invaded the home city of Gov. Edmund G. Brown. Last night, the Democratic Governor assailed Mr. Nixon at a party dinner, in which the Govern

A Lodge May Face a Kennedy Again in Mass. Senate Election

Nov. 30, 1961 - George Cabot Lodge (right) of Beverly, Mass., formally announced today his candidacy for the Republican nomination for United States Senator in 1962. Mr. Lodge, 34, is a son of Henry Cabot Lodge, Republican nominee for Vice President in 1960. The long-expected declaration made Mr. Lodge the first official entry in the contest to fill the seat occupied by President Kennedy when he was elected to his present office in 1960. Mr. Kennedy won the seat from Mr. Lodg

Nixon: I'm Not Afraid of JFK

Sept. 30, 1961 - Richard M. Nixon moved today to take himself completely out of the Presidential picture in 1964, even by way of a draft at the convention. He said he was glad that Republicans had "two such articulate candidates" as Gov. Nelson A. Rockefeller of New York and Sen. Barry Goldwater of Arizona. "And I am also glad," he added, "that both are moving to the center of the road, where they belong." As for a possible draft, he said that a study of American history show

Nixon to Run for Governor of California

Sept. 27, 1961 - Richard M. Nixon announced today that he would be a candidate for Governor of California next year. The former Vice President also renounced any intention of being the Republican candidate for President in 1964. The party's 1960 Presidential candidate suggested that his decision "cleared the way" for possible 1964 candidacies of Gov. Nelson A. Rockefeller of New York and Senator Barry Goldwater of Arizona, or for other aspirants who might emerge after the 196

Sept. 16, 1961 - Former President Dwight D. Eisenhower vigorously attacked the Kennedy Administration in Chicago today. He said Americans were chagrined, puzzled, disturbed, distressed, and troubled by the Administration's handling of recent events. He charged the Administration with "indecision and uncertainty" in dealing with the Cuban and Laotian crises. In a speech at a testimonial dinner for Sen. Everett Dirksen, he said that the Democrats, with a 2-to-1 margin in Congre

Rockefeller Coy about Plans for 1964

Sept. 14, 1961 - New York Governor Nelson Rockefeller (pictured left) refused to be pinned down today on whether he would serve a full, four-year term if re-elected next year. "More politicians have gotten themselves into trouble answering that question than you shake a stick at," Mr. Rockefeller said. "I'm not going to be one of them." Mr. Rockefeller has been mentioned as a possible Republican Presidential candidate in 1964, as has Arizona Senator Barry Goldwater and former

Sept. 14, 1961 - Former Vice President Richard M. Nixon challenged former President Harry S. Truman today to a piano-playing contest. "Since I've had time to practice," Mr. Nixon said, "I think I can play 'The Missouri Waltz' better than he does, but I'll have to admit he is better at Tchaikovsky." Mr. Nixon was in Denver to address the American Legion's national convention. Mr. Truman addressed the convention today. "If we can't beat them at the polls," Mr. Nixon declared, "

Sept. 12, 1961 - Richard M. Nixon today warned the growing field of Republican gubernatorial entries in California to focus their primary campaign ammunition on the Democrats rather than each other. The former Vice President, at a news conference in Denver, insisted that he still had not made up his mind about running against Gov. Edmund G. Brown for a four-year term. He said he would announce the decision in Los Angeles "within ten days." His decision is expected to have con

Sept. 11, 1961 - Former President Eisenhower said today that no plans for an invasion of Cuba had been made before he left office. This disclaimer is in sharp contrast to what high officials of both the Eisenhower and Kennedy Administrations have said privately about the genesis of the ill-fated undertaking last April, when Cuban refugees failed to hold a beachhead at the Bay of Pigs. A well-informed source close to the White House commented after Mr. Eisenhower's statement:

Sept. 4, 1961 - Former Vice President Richard M. Nixon got a hole-in-one on the golf course today. Mr. Nixon, playing with Randolph Scott, actor; former California Rep. Donald Jackson; and a friend, C.G. Rebozo, aced the 155-yard third hole at the Bel-Air Country Club in Los Angeles. Mr. Nixon called his feat "the greatest thrill in my life - even better than being elected." Jack Dover of the pro shop said that since today was national Hole-in-One Day, the former Vice Preside

Goldwater: Nixon Will Be Next California Governor

Sept. 3, 1961 - Senator Barry Goldwater indicated today that he thought Richard M. Nixon would win the governorship of California next year. He said this would make the former Vice President unavailable for the Republican Presidential nomination in 1964. The Arizona Senator, who is a possible contender for that nomination, said he was certain that if Mr. Nixon ran for Governor, "he would make it plain that he intended to serve his four years." There has been some speculation

GOP Urges Nixon to Run for Governor of California

Aug. 30, 1961 - National Republican leaders overwhelmingly urged former Vice President Richard M. Nixon today to run against Governor Edmund G. Brown (pictured with President Kennedy) of California next year. Mr. Nixon and party leaders from in and outside Congress agreed at a private breakfast in Washington this morning that the party must build strength in the 1962 elections. But the main topic was the possibility of Mr. Nixon's run against Brown, a Democrat, in California.

Ike Pledges to Support Nixon if He Runs for Governor

Aug. 28, 1961 - Former President Eisenhower pledged today his full support if his Vice President, Richard M. Nixon, decides to run for governor of California. General Eisenhower made the promise as he and Mr. Nixon met at the General's farm outside Gettysburg. "If he decides to run and asks me to help him, I'll do everything I can to help him win," the former President said. Mr. Nixon refused to say whether he would run for the post next year. He said that he had been receivi

Nixon Undecided on Running for Governor of California

Aug. 26, 1961 - Former Vice President Richard M. Nixon is still wavering on the question of running against California Governor Edmund G. Brown next year. Republican Party leaders are looking to him as the surest candidate in a tight race, with registered Democrats outnumbering Republicans by more than 1 million. Conflicting with this is Mr. Nixon's desire to avoid executive responsibilities that could hamper his activities in connection with a possible run against President

Aug. 22, 1961 - The annual convention of the National Student Association in Madison, Wis., was stirred today by controversy over the race issue and African nationalism. A speech last night by William F. Buckley Jr., the ultra-conservative editor and author, started the controversy. In his speech, Mr. Buckley declared that it was impossible to equate the lofty level of the deliberations of George Washington, Benjamin Franklin, and Thomas Jefferson with those of Patrice Lumumb

Aug. 9, 1961 - Herbert Hoover (center), 31st President of the United States, turned 87 today, and he faces the coming years unafraid, proud of his country, and confident in its strength and future. Interviewed in his apartment in New York's Waldorf Towers, Mr. Hoover said war was not imminent because "the Russians most likely do not want a nuclear war any more than we do." He did not, however, place much credence in Premier Khrushchev's protestations of new programs or polici

July 28, 1961 - Senator Barry Goldwater, a spokesman for Republican conservatives, attacked the "censorship" he said the Kennedy Administration had placed on military leaders. In a speech at the Texas American Legion Convention, the Arizonan said: "It is now becoming popular in the national Government to investigate and censure military men who have any words of warning to say about Communist influences in American life. You men who have fought in wars must wonder what kind o