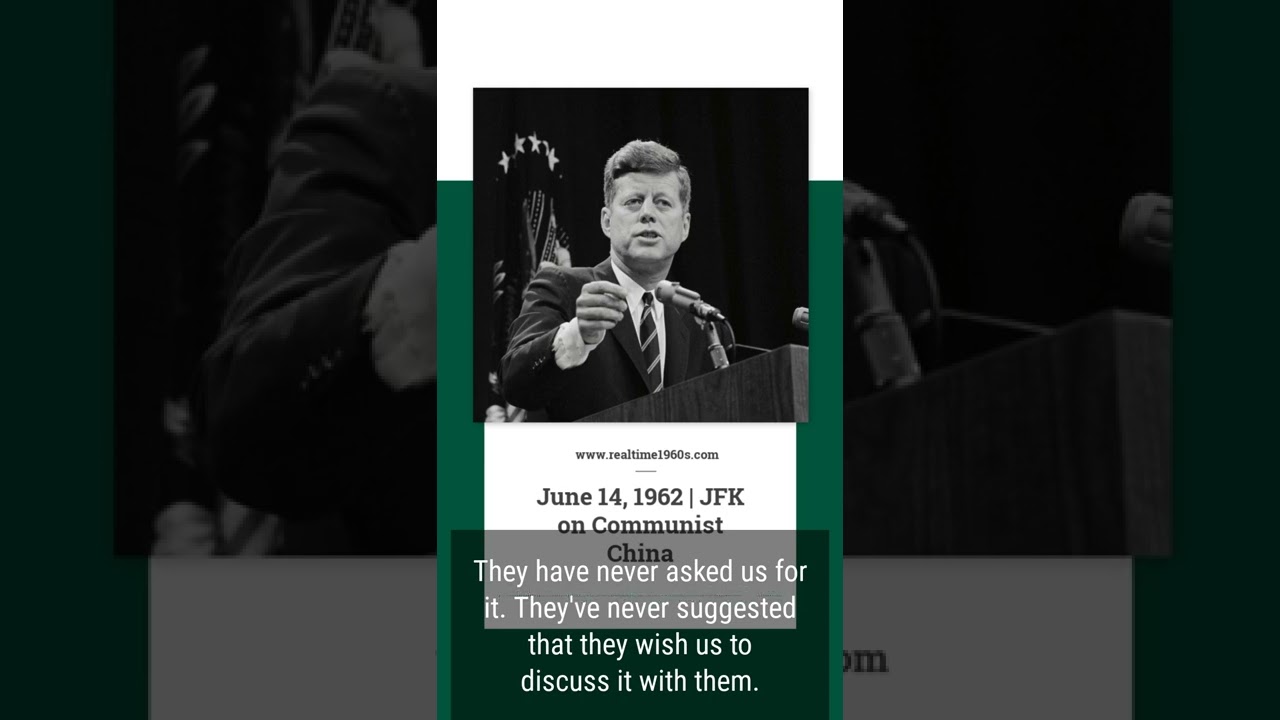 June 14, 1962 - President Kennedy responds to a Peace Corpsman's question as to why the U.S. does not send food to Red China. That nation is currently suffering one of the deadliest famines in history. #coldwar #communism #china #jfk

May 13, 1962 - “55 Days at Peking,” a dramatization of the Boxer Rebellion in China starring Charlton Heston and David Niven, is scheduled to go before the cameras in Madrid next month under the direction of Nicholas Ray, who will work from a script by Philip Yordan. Location filming is to be done in the Orient. During the 1900 Boxer Rebellion, U.S. Marine Maj. Matt Lewis (Heston) and British consul Sir Arthur Robertson (Niven) develop a plan to keep the rebels at bay until a

Apr. 27, 1962 - Communist China, condemning U.S. resumption of nuclear testing, warned today that the Chinese people together with the rest of the world “will eventually settle accounts with the United States.” In language as unrestrained as any previously used by Beijing, editorials in two major newspapers charged that Washington was preparing for nuclear war. They also attacked President Kennedy as “more vicious, more cunning, and more adventurist than his predecessor,” Pre

Apr. 3, 1962 - W. Averell Harriman, Assistant Secretary of State for Far Eastern Affairs, told Congress today that the overriding objective of the Chinese Communists “is to eliminate the presence of the United States in the western Pacific.” “The hostility and frustrations of the Red Chinese are focused on the U.S. because they realize that we are the principal obstacle to the fulfillment of their plans for the conquest of Asia,” he said. Mr. Harriman, testifying in support o

Feb. 14, 1962 - General Hu Tsung-Nan (pictured in 1936), who wanted to throw his 250,000 troops against the Chinese Communists during World War II, died today of a heart ailment. He was 62 years old. President Chiang Kai-shek refused to let General Hu attack the Communists for fear civil war during the conflict with Japan would have provoked the U.S. to halt aid to the Nationalists. The Communists at that time were surrounded in the North China province of Shensi by General H

Feb. 14, 1962 - State Department authorities said today the U.S. was still trying to get an accounting from Communist China of American troops missing in the Korean War. The inquiries were said to be a regular item in the talks held periodically between the U.S. and Communist Chinese Ambassadors in Warsaw. The State Department says it has no evidence that any of the 389 missing are still alive. But the U.S. position is that the Beijing regime should tell whatever it knows abo

Jan. 30, 1962 - Communist China’s propaganda campaign against President Kennedy was extended today to Attorney General Robert F. Kennedy, the President’s brother. A Government radio broadcast out of Beijing said today: “Robert Kennedy, a close lieutenant and political advisor to his brother for many years, was born in 1925 and so is still a youth. But he is already old in his career as a political policeman, a rabid reactionary, a hounder of progressives and of labor unions a

Jan. 16, 1962 - Communist Chinese propaganda denounced President Kennedy and the U.S. Government today. Accusing the President of acts of “persecution” against the American Communist party, all the major newspapers in Beijing carried editorials vilifying him as a “Fascist” in the class of Hitler, Mussolini, and General Tojo, World War II militarist leader of Japan. Observers viewed the attack as a direct outcome of the deepening ideological split between the Soviet Union and

Dec. 15, 1961 - The General Assembly rejected today a proposal to seat Communist China in the United Nations. The vote was 48 against the proposal and 37 for it. Nineteen nations abstained. The margin against admitting the Beijing Government, contrary to general expectations, was slightly larger than it was last year. It amounted to a somewhat firmer U.S. victory — at least for now — than the American delegation had expected. #Podcast #podcasts #podcasting #podcaster #podcast

Dec. 1, 1961 - Adlai E. Stevenson denounced Communist China today and said that its admission to the United Nations would give the organization’s “seal of approval” to an attack on Taiwan by the Beijing Government. Mr. Stevenson spoke as the General Assembly, for the first time since the Communists gained control of the Chinese mainland in 1949, embarked upon a full-scale debate on who should represent China in the U.N. Mr. Stevenson attacked Communist China for having invade

Sept. 17, 1961 - Former President Harry S. Truman talked of many things during a two-hour interview last night with David Susskind. Some of his observations during the "Open End" program: Juvenile delinquency - "There's no more in proportion to the population than there was when I grew up, only we could cover it up because there wasn't so much reporting as there is now." Coexistence - "I hate that word, because there is no such thing. You can't do anything as far as the Russi

Aug. 31, 1961 - Communist China issued a statement today expressing support for the Soviet Union's decision to resume nuclear tests. The statement said that Communist China regarded the Soviet decision as a "cooling dose for hot-headed war plotters but a powerful inspiration to all peoples striving for world peace." The statement, broadcast by Beijing radio, charged that the Western powers, "especially U.S. imperialism and West German militarism," were "fanning up war hysteri

Aug. 21, 1961 - Special measures to "safeguard public health" and combat "seasonal diseases" are being taken by Chinese Communist authorities, according to Chinese radio broadcasts. The broadcasts made no mention of a cholera epidemic which is reportedly sweeping the Kwantung province and taking a heavy death toll. Despite the appearance of cholera in Macao and Hong Kong some weeks after the first reports, there has been no acknowledgement by the Communist Chinese of any pres

July 5, 1961 - General Douglas MacArthur told the Philippine Congress today that the United States' failure to see the Korean war through to victory was "a major disaster for the free world." General MacArthur asserted that the consequences of this Korean war policy were now being felt in Communist China's rise to a military colossus. The former commander of U.N. forces in Korea said that the U.S. could have destroyed China's capability of waging war "for generations to