Dec. 27, 1962 - Five more East German refugees escaped to West Berlin unnoticed by communist border guards today, bringing to 14 the number who have fled since Christmas. Four men crossed the border early today, and another escaped last night. Eight others crashed the border yesterday in a 10-ton bus protected with homemade armor plating. Today, the bus’s 40-year-old owner told a press conference he and the others had fled to escape the misery of life in shortage-plagued comm

Dec. 26, 1962 - For six months, Hans Weidner, a crippled war veteran, worked deep in Communist East Germany to armor and outfit an old bus for a run to freedom in West Berlin. Today, he made it in spectacular fashion. Mr. Weidner led a party of eight refugees that crashed the bus through three Red barriers on the main road to West Berlin and emerged unscathed. A half dozen bullets fired by East German border guards scarred the bus’s cream-colored paint. The headlights were sh 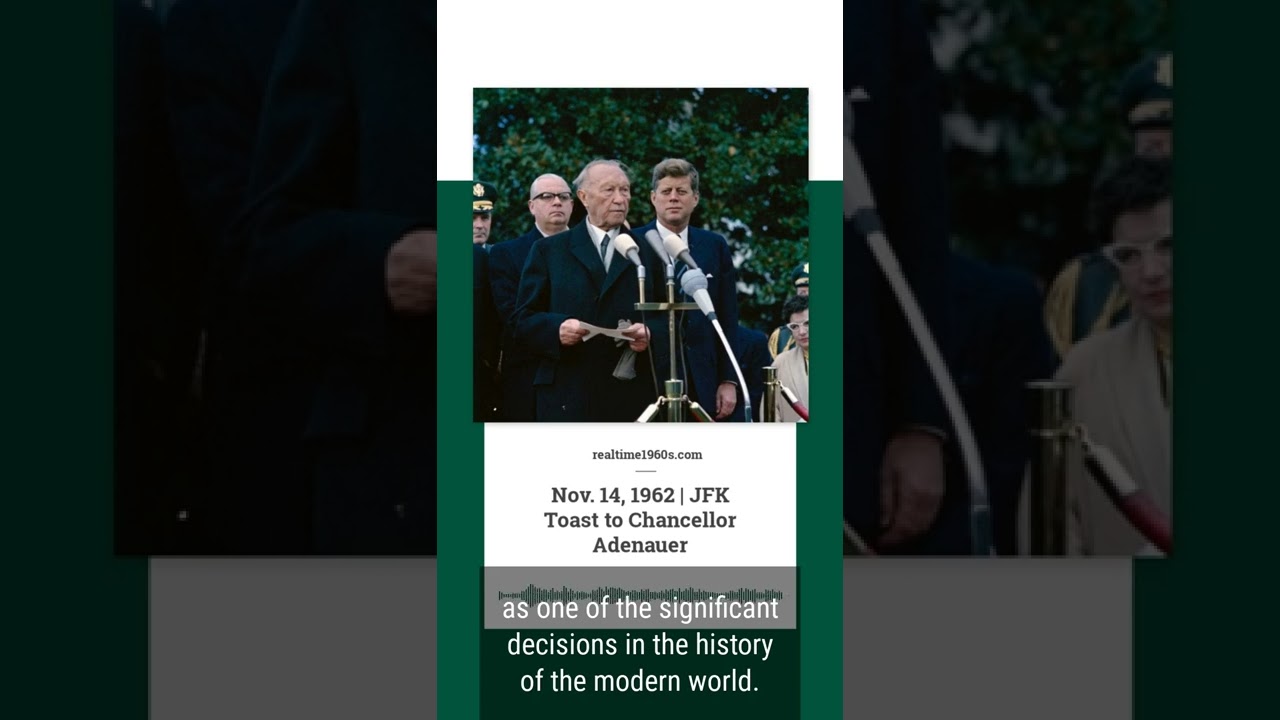 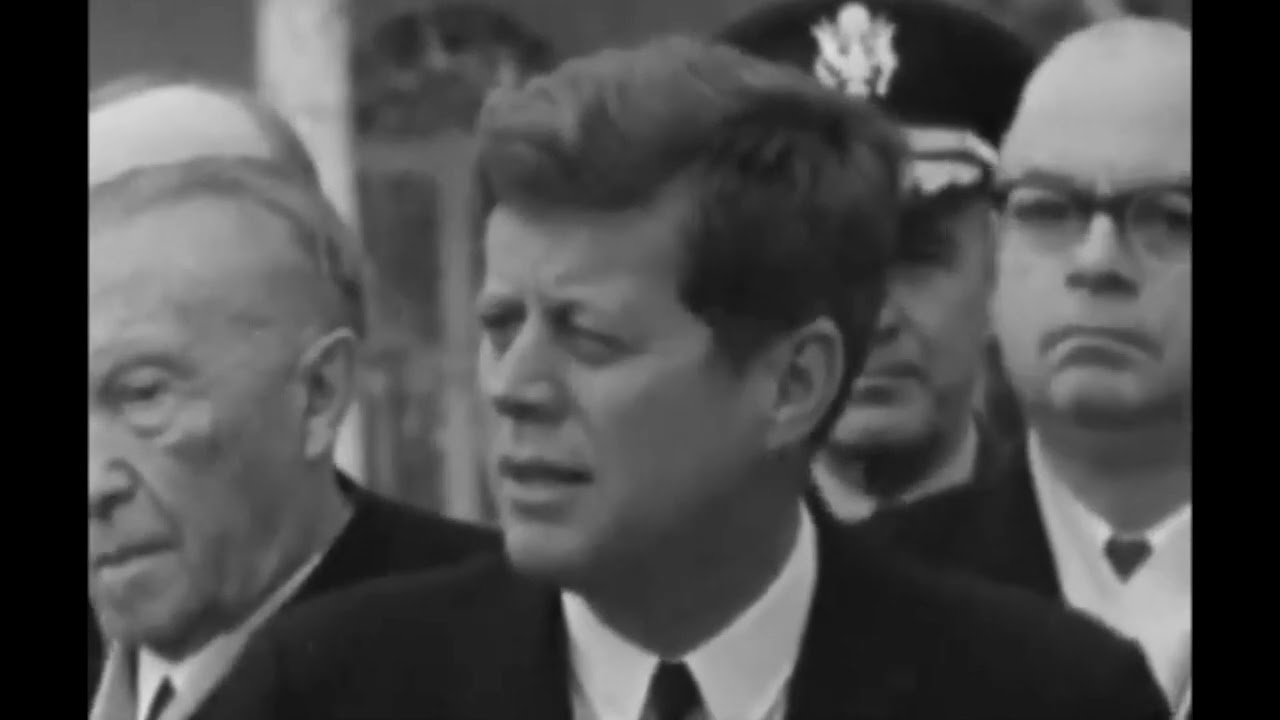 Nov. 14, 1962 - President Kennedy and West German Chancellor Konrad Adenauer held a round of meetings today. Their discussions about the meaning of the Cuban crisis, the future trend of world affairs, the problems of Berlin and Western defense, and the future of Europe were apparently cordial and respectful. The atmosphere, however, was cool, reflecting what one close observer described as “the fact that these two fellows just can’t hit it off.” The usual ceremonial speeches

July 23, 1962 - More than 17 years after the collapse of the Nazi regime, one of Hitler’s chief planners for the “mercy killings” of the mentally disabled will be brought to trial. The chief prosecutor’s office of the West German state of Hesse said today that Dr. Werner Heyde (pictured), alias Fritz Sawade, has been charged with having shared responsibility in the killing of more than 100,000 persons. Dr. Heyde, formerly head of the Reich Society for Mental Institutions, ass

Feb. 26, 1962 - A former S.S. (élite guard) sergeant went on trial in Stuttgart today, charged with the murder of 20 Jews during World War II. Twenty-six witnesses from the United States, Israel, France, Britain and Austria are scheduled to testify against the former Nazi soldier, Felix Landau (pictured in the 1930s), a 51-year-old interior decorator from Stuttgart. Landau is accused of having personally selected 20 Jews to be shot in July of 1941 in retaliation for the failu

Jan. 25, 1962 - East German border guards seized today the entry to a secret tunnel that 28 East Germans used as an escape route to West Berlin yesterday, a spokesman for the Berlin city government disclosed. He said the Communist action followed the disclosure of the tunnel’s existence by an American news agency, United Press International. It was understood that UPI got the details of the escape by interviewing some of those who fled after they had been taken to the Marienf

Jan. 24, 1962 - Twenty-eight East Germans, including a 71-year-old paralyzed woman and an 8-year-old girl, fled to West Berlin early today. The group was the largest to escape from East Berlin since the Communist regime closed the border last August. The paralyzed woman was carried across the border by other members of the party. The woman had had two strokes. Five persons among the ten men and eighteen women were over 60, according to the West Berlin police. The refugees esc

Dec. 15, 1961 - In Israel today, Adolf Eichmann was sentenced to death by hanging for his role in the killing of 6,000,000 Jews during World War II and for other war crimes and crimes against humanity. The three judges of the Jerusalem District Court delivered the sentence at 9:20 a.m. (2:20 a.m., Eastern Standard Time). Eichmann, looking very pale, was led to his glass cage at one minute to 9. He remained standing stiffly and arrogantly while Presiding Judge Moshe Landau acc

Oct. 10, 1961 - Fifty thousand Soviet combat troops and ten thousand Polish troops have arrived in Communist East Germany to take part in Warsaw Pact maneuvers near the West German border. An undisclosed number of Czechoslovakian troops have also arrived in the southern part of East Germany. The Polish and Soviet units include paratroopers and other airborne troops. The Poles brought tanks, artillery, at least 650 trucks, and enough field kitchens to provide meals for three d

Robert Kennedy says President Would Use Nuclear Weapons if Necessary

Sept. 24, 1961 - Attorney General Robert F. Kennedy said today that there "is no question" that his brother, President Kennedy, would order use of nuclear weapons if they were essential to save West Berlin's freedom. The Attorney General, on NBC's "Meet the Press," said: "If we retreat, we will never be able to stand up again. The President has said again and again that if we don't stand up in Berlin, when can we stand up?" He predicted that Premier Khrushchev would continue

Refugee from East Berlin Her Gets Dog Back

Sept. 16, 1961 - It is not only humans who are bothered by the Communist wall across Berlin - dogs are affected as well. A fox terrier named Mausi finally got back to his mistress in the West today. An East German policeman at Friedrichstrasse led the dog on a leash to the border and then turned him loose. Mausi dashed across the border and leaped into the arms of his owner, a hospital nurse, and licked her face. She had been waiting three days at the crossing point to see if

Sept. 15, 1961 - Horst Buchholz, the German film star who appeared in "The Magnificent Seven" last year, was discharged from a Munich hospital today and promptly sentenced to 25 days in jail on drunken driving charges. The sentence was suspended on condition that he have no traffic violations until 1965. The court also suspended his license for 10 months and fined him 25,000 marks ($6,250). The actor had been in the hospital for 18 days recovering from injuries suffered in a

Sept. 9, 1961 - The United States will send about 40,000 Army troops to Europe "in the immediate future" to strengthen combat and support forces there, the Pentagon announced today. The announcement was expected. It was the latest in a series of moves, including the call-up of military reserves and plans for a broad expansion of the armed forces, that President Kennedy has undertaken to cope with the crisis in Berlin and other trouble spots. #germany #berlin #communism #commu

Sept. 9, 1961 - The Pentagon took action against two Army officers in Berlin today for having permitted the use of U.S. forces in the filming of a Jack Paar television show. Col. John R. Deane Jr. (pictured), commanding officer of the Second Battle Group, Sixth Infantry, in Germany, was admonished for "exercising poor judgment." The Defense Department also announced that Lieut. Col. Dallas Hoadley, public information officer of the Berlin Command, had been relieved of his dut

Senators Decry Use of Military for Paar Show in West Berlin

Sept. 8, 1961 - "Shocking," "disgraceful," and "highly dangerous" were descriptions applied by Senators today to describe the use of U.S. Army forces in the filming of a Jack Paar television show in West Berlin yesterday. The Defense Department, with White House approval, ordered an investigation. Majority Leader Mike Mansfield told the Senate that the situation in Berlin was a world tragedy, not a television spectacular "to be made into some kind of game for the personal pro

Sept. 7, 1961 - Fifty armed U.S. soldiers moved rapidly down the street, then took possession of buildings overlooking the East-West Berlin border. A jeep mounting an anti-tank gun and several others mounting machine guns moved into position along either curb. Two colonels arrived. It was the biggest turnout the U.S. Army had yet made along the wall that divides the city - and it was all for Jack Paar, TV star. Mr. Paar filmed one of his shows along the "concrete curtain," so

Aug. 30, 1961 - President Kennedy said today that Gen. Lucius D. Clay would return to West Berlin next month as his personal representative. The President described the situation in Berlin as "fraught with danger” and promised to use all means to find a peaceful settlement, but he said he had no indication from Moscow that made him optimistic about the prospects. Gen. Clay, retired, who was military governor of Germany when an Allied airlift broke the Communist blockade of Be

Aug. 26, 1961 - Eight British soldiers in a jeep and a small armored scout car escort 12-year-old Erwin Schabe (pictured right) to school these days past the Communist police. Erwin lives in an enclave on the northwest edge of Berlin that called "Eiskeller" (Ice Cellar), which is surrounded by Communist barbed wire and observation posts. Eiskeller juts into East Germany. A corridor only eight feet wide connects Eiskeller with the British sector of West Berlin. East German pol
1
23
bottom of page