Jan. 25, 1963 - Another group of 1,170 refugees reached the U.S. today from Cuba. Some were old and in poor physical condition, and many were pale from seasickness when they left the freighter Shirley Lykes at Fort Lauderdale’s Port Everglades after a pitching voyage in 25-knot winds and heavy seas. But they smiled brightly when they rode from the port in a cavalcade of buses to Miami Stadium, where 5,000 friends and relatives who had come earlier gave them a loud and cheerfu

Jan. 10, 1963 - Richard Cardinal Cushing (pictured right), Roman Catholic archbishop of Boston, revealed today that he is the “mysterious donor” who raised $1 million to help liberate the prisoners captured in the April 1961 Bay of Pigs invasion of Cuba. The prelate said he was disclosing his part in the raising of the ransom money because of “rumors crediting this gift as coming from sources with which I have no identification.” In Washington, a Justice Department spokesman

Dec. 29, 1962 - President Kennedy stopped considerably short of declaring war on Fidel Castro in his fiery appearance before Miami’s Cuban refugees today, but before his speech at the Orange Bowl Stadium was ended, they were shouting “Guerra! Guerra!” (War! War!) with fanatic enthusiasm. With an emotionalism he has seldom displayed, Mr. Kennedy told 40,000 Cubans as well as the survivors of the Bay of Pigs invasion that his Administration was committed to the freedom of Cuba

Dec. 27, 1962 - In Palm Beach, Fla., today, President Kennedy accepted an invitation to review the freed Cuban prisoners at a ceremony in Miami. At the ceremony, Mr. Kennedy will receive the brigade flag that flew above the Cubans in their unsuccessful effort to liberate their country. The ceremony will be held at Miami’s Orange Bowl Saturday morning. The invitation to the President was conveyed by six Cubans (pictured today), five of them freed prisoners. The Cubans said tha

Dec. 27, 1962 - The American freighter African Pilot arrived in Florida today with 922 Cuban refugees, the largest single mass exodus from Premier Fidel Castro’s communist island. The refugees, mostly women and children, are relatives of the 1,113 Cuban invasion prisoners Castro freed under a $53 million ransom deal. The ship, on loan to the Red Cross from the American Steamship Lines, docked shortly after 9 a.m. at nearby Port Everglades after an uneventful 13-hour trip from

Dec. 26, 1962 - The freighter African Pilot, packed with 923 Cuban emigrants, sailed tonight for Florida. Released by Premier Fidel Castro (pictured at the inauguration of a kindergarden in April) as a Christmas bonus, they will rejoin their close relatives, the Bay of Pigs prisoners ransomed last week from Cuban prisons. Their voyage across the Florida Straits was expected to take 14 hours. Some of them left behind everything they own to reunite with the 1,113 men released i

Dec. 25, 1962 - The intelligence chief of the Bay of Pigs invasion force (pictured after their capture in April 1961) said today that the captured prisoners of the abortive assault “do not feel that the U.S. let us down.” “We knew where we were going. Nobody obligated us to go. We did what we could under the circumstances, and we fought until the last bullet,” said José Raul Varona Gonzalez. There had been talk before the 1,113 invasion prisoners returned to Miami that many o

Dec. 25, 1962 - General Lucius D. Clay, Attorney General Robert F. Kennedy, and others raised almost $3 million in cash this week to make possible the completion of the Cuban prisoners’ release. The money was raised in 24 hours ending yesterday afternoon. At 3 p.m., a $2,900,000 check drawn on the Royal Bank of Canada was in the hands of Premier Fidel Castro, who had been promised this sum and demanded its payment as evidence of good faith. Attorney General Kennedy set the ca

Cuban Invasion Leader: “We Shall Return”

Dec. 25, 1962 - Manuel Artime (pictured in May 1961), one of the leaders of the abortive 1961 Cuban invasion, today called on all the governments of the Western Hemisphere to join military forces against the Castro regime. He said such unity could “topple the Cuban Communist rule within a week.” Mr. Artime, 30, emphasized, however, that the ransomed invasion prisoners themselves are determined to return in a new attack to overthrow Castro. “We have given our word to our dead,

Dec. 25, 1962 - Premier Fidel Castro switched signals today and told relatives of ransomed invasion prisoners that if they want to go to the U.S., they must buy their way out of Cuba with their homes and automobiles. The new regulations came down after some of the relatives had already been cleared for boarding the African Pilot, scheduled to sail for Florida at 6 p.m. tomorrow. The switch in regulations meant that some of the relatives already cleared by the Cuban government

Dec. 24, 1962 - The last of the 1,113 Bay of Pigs invasion prisoners came back tonight in time to spend Christmas with their relatives. The last of 10 flights by Pan American World Airways planes carried James B. Donovan, who negotiated the liberation, along with the highest-priced ransom prisoners. Also on the last plane were the wounded men and stretcher cases. They got a heroes’ welcome. The prisoners were taken by bus to Miami, where they were reunited with their families

Castro to Release Relatives of Bay of Pigs Prisoners

Dec. 24, 1962 - Premier Fidel Castro has cleared the way for more than 1,000 Cuban relatives of liberated Bay of Pigs prisoners to join them in the U.S., attorney James B. Donovan said today. The Cuban premier called it a Christmas bonus in his swap of the 1,113 invasion captives for $53 million worth of food and medicine. Arrangements were being made for the relatives — mothers, fathers, wives, and children of the released prisoners — to leave the Caribbean island within 48

Bay of Pigs Prisoners Speak of Mistreatment in Cuban Jails

Dec. 23, 1962 - Mistreatment and neglect were the lot of Bay of Pigs prisoners held for the last 20 months in Cuba, several of the liberated men said in Miami tonight. They had poor food and not much of it. They were kept in overcrowded cell blocks with inadequate sanitary facilities. In many cases, they had no cots and had to sleep on floors without blankets. Medical care approached zero. No medicines were available and hospital treatment was impossible. Dr. Robert Hopkins,

Dec. 23, 1962 - The first Cuban war prisoners liberated from Fidel Castro’s jails in exchange for medicine and food reached U.S. soil today. Their plane landed in Florida at 6:06 p.m. New York time. The plane, carrying 107 of the 1,113 captives being freed, was greeted by leaders of the Cuban Families Committee and more than 200 newspaper and television reporters at Homestead Air Force Base, south of Miami. Large buses were present to take the prisoners to the processing cent

First Bay of Pigs Prisoners to Arrive in Florida Tomorrow

Dec. 22, 1962 - U.S. official sources said tonight the first planeload of Cuba invasion prisoners would be flown to Florida 8:30 a.m. tomorrow morning. The source, at Homestead Air Force Base where the captives (pictured at their trial in Cuba) are to be landed, said a Pan American World Airways plane would depart at 6 a.m. from Miami International Airport for Havana. A second flight will leave Miami at 6:30 a.m., the spokesman said. Meanwhile, other Pan-Am planes will fly to

Dec. 21, 1962 - The 1,113 Cuban invasion prisoners will be ransomed for food and medical supplies beginning Sunday morning — two days before Christmas — the Red Cross announced tonight. The Red Cross said New York lawyer James Donovan (right) reached a signed agreement in Havana with Cuban Premier Castro to trade $53 million worth of food, drugs, and medical supplies for the prisoners taken in the Bay of Pigs invasion in April 1961. Mr. Donovan confirmed in a telephone call f

Dec. 14, 1962 - The military transport Geiger arrived at Guantanamo Bay, Cuba, today with a shipload of wives, children, and other service dependents who were removed from the naval base at the height of the Cuban crisis (pictured below is the evacuation October 22). About 400 dependents of American servicemen were aboard the ship. It was the first shipload of returning dependents to reach Guantanamo. Dependents began returning to the base by air a week ago, however. Some of

Dec. 10, 1962 - Cuba planned nuclear attacks against key U.S. cities, including New York, in retaliation against any new invasion of the island, Ernesto (Che) Guevara (pictured) told a Communist newsman recently. The Argentine-born industries minister made the statement to a correspondent of the London Daily Worker in an interview. The statement and several others were edited out of the published interview by Communist editors. UPI obtained a copy of the original text of the 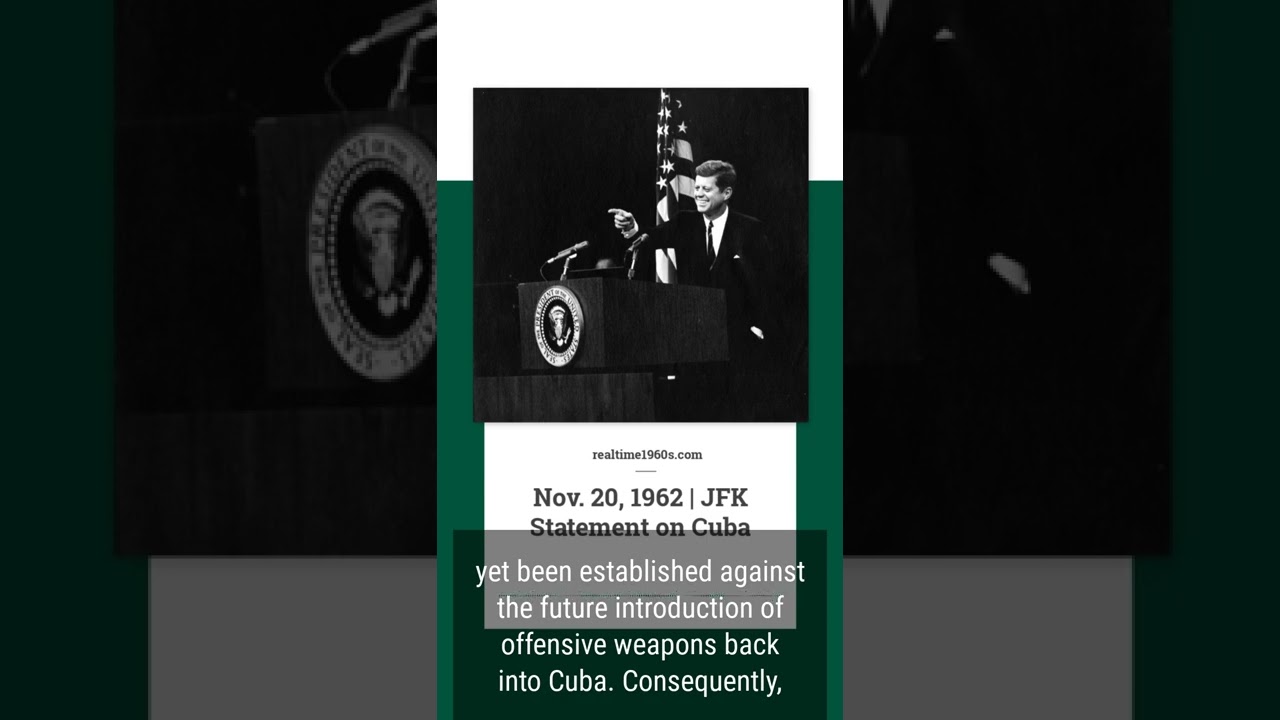 Nov. 19, 1962 - Premier Fidel Castro informed the U.N. early today that he would not object if the Soviet Union removed the jet bombers it had sent to Cuba. The Premier withdrew Cuba’s previous assertion that the bombers had become Cuban property. He said the Ilyushin-28 bombers, which have a range of 750 miles and are capable of carrying nuclear bombs, were too old to be of any use to Cuba. Premier Castro’s letter opened the door to a solution to one of the principal remaini
1
2345
bottom of page