June 10, 1962 - “The Longest Day,” the 20th Century-Fox version of Cornelius Ryan’s book about the Allied landings in Normandy, will open on Oct. 4 at the Warner Theatre. The Darryl F. Zanuck production runs for three hours and fifteen minutes and will be presented on a reserved-seat basis. #classicmovies #1960s #OTD #wwii

June 9, 1962 - Former President Truman (pictured on his birthday last month) went on the radio today to brand as a lie a Soviet propaganda charge that he had initiated the nuclear arms race. The wartime Commander in Chief replied to a Moscow radio broadcast that said the atom bombings of Hiroshima and Nagasaki were unnecessary and inhuman. The broadcast had also said that the bombings were undertaken to intimidate revolutionaries and to influence Soviet decisions on the peace

June 8, 1962 - The so-called “Wolf’s Lair,” the supreme command post of Adolf Hitler in what formerly was German East Prussia, has been preserved as a tourist attraction by the Polish Government. The command post, where the assassination attempt against Hitler took place on July 20, 1944, covers many acres of remote woodlands in the Masurian Lake district. The preservation of the “Wolf’s Lair,” from which Hitler intermittently directed his armed forces for almost four years o

June 6, 1962 - U.S. Ambassador James M. Gavin (pictured in 1944), who landed in France 18 years ago as a paratroop general, led ceremonies today commemorating the D-Day invasion and the 10,000 American soldiers buried in France. Ambassador Gavin visited the military cemetery near the invasion beaches and laid a cornerstone for an American Forces museum at Sainte-Mere-Eglise, the first French village to be liberated. On June 6, 1944, he was deputy commander of the 82nd Airborn

May 12, 1962 - General of the Army Douglas MacArthur received the Sylvanus Thayer Award “for outstanding service to the nation” in ceremonies today at the United States Academy at West Point today. The 82-year-old general, still an imposing figure in a dark business suit and Homburg hat, inspected the Corps of Cadets in a Brigade Review on the historic ground known as The Plain. Future Army officers raised gleaming sabers to salute the old soldier in the brilliant sunshine. 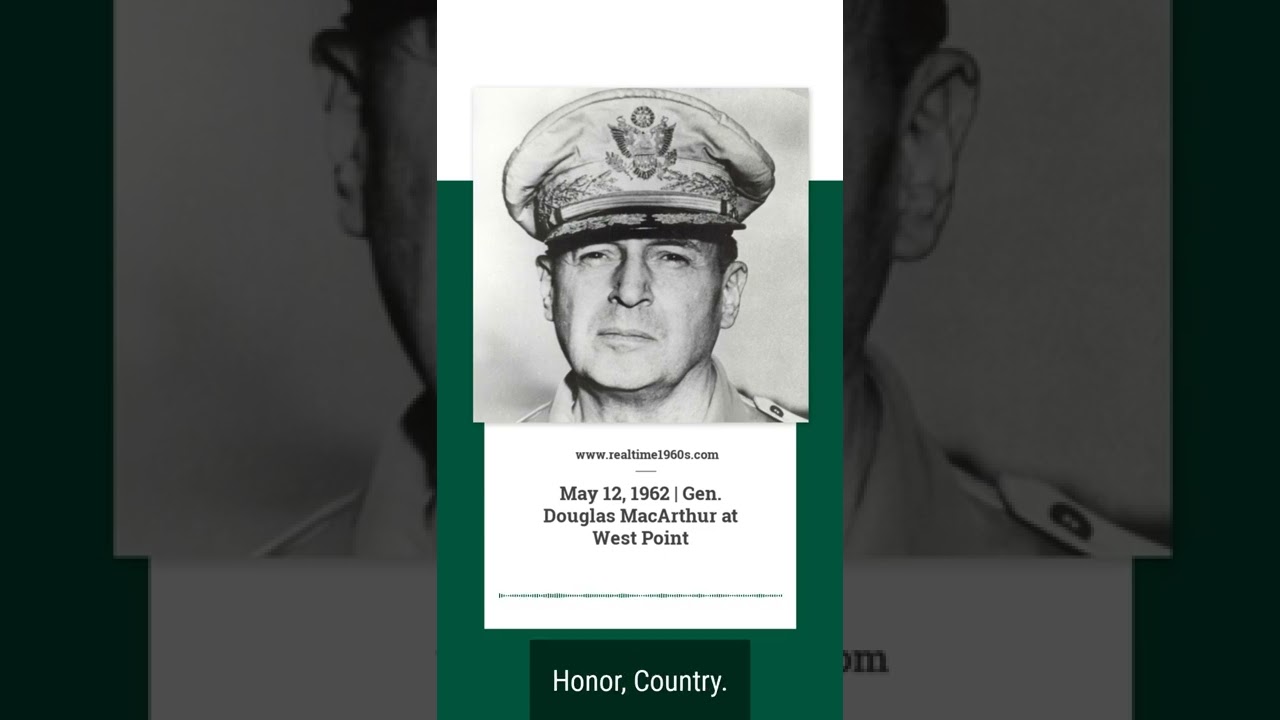 May 12, 1962 - General Douglas MacArthur received the Sylvanus Thayer Award “for outstanding service to the nation” in ceremonies today at the U.S. Academy at West Point. Here is the conclusion of his acceptance speech. #army #Westpoint #WWII #military #veterans

Apr. 10, 1962 - Lieut. Gen. Manton S. Eddy (pictured without helmet in 1944 between General Omar Bradley and General George S. Patton), retired, famed commander of the Ninth Infantry Division during World War II and commander of the U.S. Army in Europe after the war, died in Fort Benning, Ga., today at Martin Army Hospital. His age was 69. He had suffered a heart attack on Saturday. General Eddy won the respect of officers and enlisted men alike both in war and peace. In Fran

Movies: Stuart Whitman to Star in "The Day and the Hour"

Apr. 9, 1962 - Stuart Whitman (left) has been signed to appear opposite Simone Signoret (right) in “The Day and the Hour,” a World War II drama to be filmed in France in the summer. Rene Clement will direct the Jacques Bar production for MGM release. Set in occupied France in 1944, a French woman (Signoret) finds herself helping a downed American pilot (Whitman) as he searches for a way to leave the country. #classicmovies #classicmoviestars #1960s #Movies #MovieStars #celebr

TV: "The Gallant Men" Will Debut this Fall on ABC

Mar. 12, 1962 - “The Gallant Men,” a drama series about the 36th Infantry Division during World War II, will be televised next season by ABC on Fridays from 7:30 to 8:30 p.m. The pilot episode of the series, which will star William Reynolds and Robert McQueeney, will be directed by Robert Altman. #tv #classictv #1960s #classictvshow #classictvshows #classictvcommercial #ClassicTvSeries #tvshow #tvseries #tvshows #tvprogram #tvdrama #wwii

Mar. 7, 1962 - The United States flag flew today on the Remagen railroad bridge over the Rhine, where 17 years ago G.I.’s forced their way across and shortened World War II. This time the Stars and Stripes flew alongside a German flag as a friendly reunion was held by the first American over the bridge and some of the German soldiers who had tried to stop the U.S. advance. About 500 spectators attended ceremonies marking the anniversary of the crossing. The crossing of the Rh

Feb. 26, 1962 - A former S.S. (élite guard) sergeant went on trial in Stuttgart today, charged with the murder of 20 Jews during World War II. Twenty-six witnesses from the United States, Israel, France, Britain and Austria are scheduled to testify against the former Nazi soldier, Felix Landau (pictured in the 1930s), a 51-year-old interior decorator from Stuttgart. Landau is accused of having personally selected 20 Jews to be shot in July of 1941 in retaliation for the failu

Feb. 23, 1962 - Six marines this morning staged a Times Square reenactment of the flag-raising scene on Iwo Jima 17 years ago during World War II. Present at the ceremony outside the recruiting booth in Times Square was one of two survivors of the flag-raising group, Rene A. Gagnon of Hooksett, N.H. Mr. Gagnon, a former Marine Corps corporal, was welcomed to the city by Mayor Wagner, who renamed the area “Iwo Jima Square” for three days. Mr. Gagnon said he had been in a rut a

Feb. 14, 1962 - General Hu Tsung-Nan (pictured in 1936), who wanted to throw his 250,000 troops against the Chinese Communists during World War II, died today of a heart ailment. He was 62 years old. President Chiang Kai-shek refused to let General Hu attack the Communists for fear civil war during the conflict with Japan would have provoked the U.S. to halt aid to the Nationalists. The Communists at that time were surrounded in the North China province of Shensi by General H

General Henry I. Hodes Dead at 62, Combat Commander in WWII and Korea

Feb. 14, 1962 - General Henry Irving Hodes (pictured center in Korea in 1951), a combat commander in World War II and the Korean conflict, died today in San Antonio’s Brooke General Hospital at the age of 62. General Hodes earned a reputation for toughness during negotiations with the Chinese Communists during the truce arrangements marking the end of the Korean conflict. This was in keeping with his hard-hitting approach as a combat officer. In 1944, he was named a field com

Memorial to General George C. Marshall To Be Erected in Frankfurt

Feb. 11, 1962 - A memorial to the late General of the Army George C. Marshall (pictured in 1945) as author of the plan that made possible Europe’s postwar economic recovery will be erected in Frankfurt, Germany, later this year, it was announced today. A campaign to build the memorial was launched last year by the Frankfurt Chamber of Commerce and Industry. General Marshall rose through the U.S. Army to become Chief of Staff under Presidents Franklin D. Roosevelt and Harry S.

Jan. 24, 1962 - Robert Ryan has been signed to portray General James M. Gavin (pictured in Belgium during the Battle of the Bulge) in “The Longest Day,” a film about the D-Day landings at Normandy. General Gavin was part of “Mission Boston” on D-Day. Mission Boston was a parachute combat assault conducted at night by the U.S. 82nd Airborne Division on June 6, 1944, as part of the American airborne landings in Normandy. Mr. Ryan served in the U.S. Marine Corps and was a drill

Jan. 22, 1962 - Karl Wolff (second from left), a former Nazi S.S. general who was a prominent figure in German-Allied peace negotiations in 1945, is being held on suspicion of crimes against the Jewish people. The Bavarian Justice Minister said Wolff was suspected of complicity in the mass murder of Jews in Nazi-occupied Europe. He is said to have deported as many as 300,000 Jews to the Treblinka death camp, where they were murdered. The 62-year-old general, once Chief of Sta

🎙 On this date in 1942, Adolf Eichmann and other senior Nazis met in Wannsee to hammer out the details of their "Final Solution to the Jewish Question." Check out our 2-part podcast covering Eichmann's life and crimes. LISTEN: Part 1 - Part 2 #wwii #holocaust #history #podcast

Movie-Set Decorator to Play Eisenhower in "The Longest Day"

Jan. 3, 1962 - Henry Grace (pictured), a movie-set director who has never acted before the cameras, today was cast as General of the Army Dwight D. Eisenhower for a film based on the 1944 D-Day invasion of Normandy. Mr. Grace, a 55-year-old bachelor living in Los Angeles, will come to Paris Jan. 9 for a role in “The Longest Day.” He won an Academy Award for his set direction of “Gigi” in 1959. #classicmovies #classicmoviestars #1960s #Movies #moviestar #movieset #MovieStars #

On this date in 1960, Holocaust organizer Adolf Eichmann was sentenced to hang

🎙 Check out our 2-part podcast that covers the life and crimes of this Nazi fiend. LISTEN: Part One Part Two #wwii #holocaust #history #podcast
1
23