Apr. 14, 1962 - Steel’s surrender to President Kennedy appeared today to have bolstered the Administration’s stock in and out of Congress. Ranking Democrats on Capitol Hill predicted that Mr. Kennedy’s victory might soften bipartisan objections to his tax-revision bill in the Senate. Even the chairman of the Republican National Committee, Representative William E. Miller of New York, conceded that “President Kennedy has gained politically over the short run.” This morning, Wh

Apr. 13, 1962 - For three days, the great forces at the command of the President of the United States were brought to bear on the steel industry. Some of the effort to get the steel industry to rescind its price rise was exerted in the open — the President’s denunciation of the companies at his press conference, calculated to arouse public opinion against them; the opening of grand jury proceedings leading to possible anti-trust action; and the threat to divert orders to comp

Apr. 13, 1962 - President Kennedy triumphed today over the titans of the steel industry. Seventy-two hours after the U.S. Steel Corporation’s abrupt announcement of a price increase, the corporation backed down and rescinded the increase late this afternoon. The action by U.S. Steel, the nation’s largest steel producer, followed announcements by the Inland Steel Company and the Kaiser Steel Corporation that they would not increase their prices, and a statement by Bethlehem St

Apr. 13, 1962 - Premier Khrushchev has spurned what appeared to be the final offer by the U.S. and Britain to sign a nuclear test-ban treaty that would avert the renewal of Western testing in the atmosphere later this month. In a message sent yesterday to Prime Minister Macmillan, Mr. Khrushchev again branded the Western call for a treaty that would be enforced through international inspection as an attempt to expose the Soviet Union to espionage. The Soviet leader asserted t

Apr. 12, 1962 - Roger M. Blough (pictured), board chairman of the U.S. Steel Corporation, defended his company’s new price increase today as a move to strengthen the nation’s industrial assets. He also asserted the right of an individual company to make its own pricing decisions. Mr. Blough said that the three-and-a-half percent increase initiated by U.S. Steel yesterday had had no “political motivation.” The executive’s comments were made in a prepared statement and in answe

Apr. 11, 1962 - The Shah of Iran, Mohammed Riza Pahlevi, and his wife, the Empress Farah, arrived in Washington today and received a warm welcome from President and Mrs. Kennedy. The day was cold and wet and the welcoming ceremonies at the National Airport had to be moved into a hangar. After the traditional 21-gun salute, the playing of the national anthems of Iran and the U.S., and the review of the honor guard, President Kennedy said to his royal guests: “Occupying as you

Apr. 11, 1962 - Following are the main points of President Kennedy’s news conference today: Steel — He denounced the price increases announced by the steel industry as “wholly unjustifiable” and “irresponsible defiance” of the nation’s interests. He said that they would lead to higher costs for consumers, businessmen, and the Government. Maritime strike — He said that he had ordered the Justice Department to seek a Taft-Hartley Law injunction to halt the West Coast maritime s

Apr. 11, 1962 - President Kennedy gave his tie clasp to a 15-year-old New Jersey honor student today, honoring him as the nation’s finest example of “juvenile decency.” Stephen Lutz of Newark, a six-footer, was the recipient. He had been named Boy of the Year by the Boys Clubs of America. He was cited for “superlative service to his home, school, synagogue, community, and boys’ club.” The clasp was in the form of a PT boat. Stephen gave the President a scale model, in a bottl

Apr. 11, 1962 - Four hundred students at Hunter College in the Bronx listened today to an exposition of American Nazism by a stand-in for its founder, George Lincoln Rockwell (pictured). Hundreds of mounted and foot policemen and detectives guarded the campus to protect three Rockwell aides from survivors of Nazi death camps and other pickets. Mr. Rockwell, who faces arrest for disorderly conduct on a court warrant, remained in New Jersey. The substitute lecturer was Seth D.

Apr. 11, 1962 - President Kennedy announced today that all military reservists who were called to active duty in the Berlin crisis last fall would be released in August unless the international situation grew worse. The President said at his news conference that the decision on their release was not due to any improvement in international affairs. It was made possible by the build-up of regular forces, particularly the Army, permitting the abandonment of emergency measures. T

Apr. 11, 1962 - The Senate approved by voice vote today the nomination of Byron R. White (pictured) to be an associate justice of the Supreme Court. The action cleared the way for Mr. White to take his seat on the court next Monday and hear the last two weeks of arguments in the present term. The Senate acted shortly after its Judiciary Committee conducted hearings this morning and unanimously approved the nomination. Mr. White, now Deputy Attorney General, was selected 12 da

Apr. 11, 1962 - A United States military source said today that 12 Vietnamese Communist guerrillas were killed as the band that captured four American sergeants was being pursued. The source said that Vietnamese villagers who were carrying the dead guerrillas in blankets and ponchos dropped the bodies and fled when American fighter bombers appeared overhead. The villagers had been conscripted by the Viet Cong, he said. Two American sergeants (pictured) wounded in the initial

Apr. 11, 1962 - President Kennedy accused the major steel corporations today of “irresponsible defiance” of the public interest and “ruthless disregard” of their duty to the nation in raising steel prices by $6 a ton. After arriving at his news conference, the President strode quickly to the lectern and in a tone of cold anger read a long indictment of the steel companies’ action. At a time of grave crisis in Berlin and Southeast Asia, the President began, when reservists wer

Apr. 10, 1962 - The United States Steel Corporation announced this evening price increases averaging $6 a ton, effective at midnight. The other members of the “Big 11” steel companies were expected to announce increases soon. U.S. Steel said the increase would affect all its principal products. President Kennedy was reportedly infuriated by the news. The President has deliberately leashed some of his liberal instincts in an attempt to create good working relations with busine

Apr. 10, 1962 - Vice President Johnson was congratulated today by President Kennedy and Democratic Congressional leaders on 25 years’ service with the Federal Government. Mike Mansfield of Montana, the Senate Democratic leader, told newsmen after the weekly breakfast meeting of legislative leaders with Mr. Kennedy that the President “thought this was a fine time to express congratulations” to Mr. Johnson. Vice President Johnson was elected to the House of Representatives in 1

Apr. 10, 1962 - United States Army officers said today that two wounded American sergeants were murdered in cold blood by their Communist captors in Danang, South Vietnam, on Sunday. Two other American sergeants, who were captured unwounded, are still prisoners of the Communists, the officers said. The four sergeants, trained in anti-guerrilla action, were escorting a Vietnamese Civic Action platoon on an 11-day training mission when their bivouac was overrun in a daylight at

Apr. 9, 1962 - The Washington Senators, whose 61-101 record last season prompted the adoption of “a better view in ’62” as their slogan for the year, will find it hard to improve on the vantage point they earned today. Impressing 44,383 fans, including President Kennedy, the Senators opened the 1962 American League season with a 4-1 victory over the Tigers. Bennie Daniels, a sinkerball pitcher, gave only five hits in moving the Senators into first place in the league — a posi 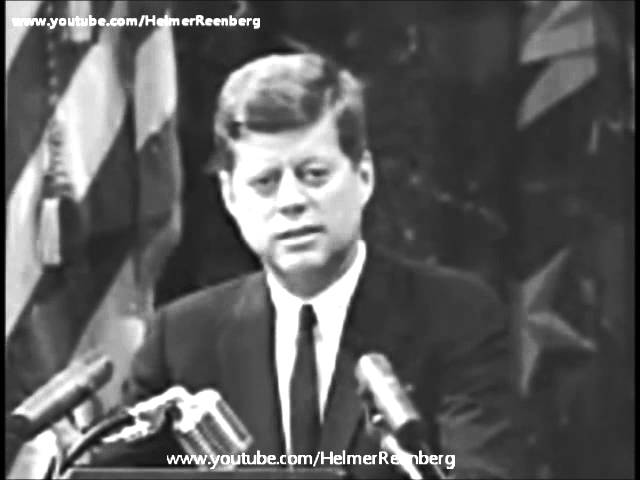 Apr. 9, 1962 - Cliff Robertson will portray John F. Kennedy in “PT-109,” the movie version of the President’s exploits as a Navy officer during World War II in the South Pacific. Mr. Robertson was chosen for the role of Lieutenant Kennedy by Jack L. Warner and Bryan Foy, producer, with the approval of the White House. Filming is scheduled to begin this spring on location in Florida, San Diego, and at the Warner Brothers Studio. Mr. Robertson, who is 36, is a native of La Joll

Apr. 9, 1962 - President Kennedy challenged adults today to continue trying to make the U.S. “a happy nursery” for children. The President spoke at the opening of a day-long 50th birthday party for the U.S. Children’s Bureau, a pioneer in advancing the well-being of children. The bureau was created during the Administration of President Taft. It is now an arm of the Department of Health, Education and Welfare, headed by Secretary Abraham A. Ribicoff. Mr. Kennedy was smiling w
34
5
67