Dec. 12, 1961 - The world champion Yankees may be faced with a record payroll that could go well over $700,000. But their salary troubles with one problem child could be over within a matter of a few hours. Mickey Mantle (pictured with Joe DiMaggio in 1951), generally recognized as the highest salaried player in the American League, is expected to sign his 1962 contract in the Yankee offices today for $85,000. That would make him the highest paid Bomber since Joe DiMaggio dre

Nov. 15, 1961 - Yankee outfielder Roger Maris, whose 61 home runs last season were the most ever hit by a major league player in a championship campaign, was voted the American League’s most valuable player for 1961. The 27-year-old Midwesterner, who makes his home just outside Kansas City, bagged the prized award for the second year in a row. In the poll of the Baseball Writers Association of America, Maris scored 202 points to 198 points for his teammate Mickey Mantle. Mick

Nov. 8, 1961 - Whitey Ford, the bellwether of the Yankee pitching staff for more than 10 years, gained the Cy Young award as the outstanding pitcher for 1961. The poll of the committee of the Baseball Writers Association showed 9 votes for Ford, 6 for Warren Spahn, 40-year-old southpaw of the Milwaukee Braves, and 2 for Frank Lary, crack right-hander of the Detroit Tigers. When asked to explain his remarkable success, the affable Whitey replied, “you’d have to say righteous l

Maris Gets 61st Home-Run Ball Back in Sacramento

Nov. 4, 1961 - Roger Maris today got back the ball he hit for his 61st home run last season, but he avoided a red-carpet welcome planned for him by a local Sacramento businessman. Sam Gordon, a restaurant owner, bought the baseball from Sal Durante, who recovered it at Yankee Stadium on Oct. 1. Gordon paid Durante $5,000 for the ball. He also paid for a honeymoon trip for Durante and his bride. Gordon also paid for Maris’s round-trip airplane fare from Kansas City. He had arr

Oct. 30, 1961 - Sal Durante (right), the 19-year-old Brooklyn truck driver who caught Roger Maris’s 61st home run, arrived in Sacramento today with both the ball and his new bride (left), Rose Calabrese, 17, a secretary. A Sacramento restaurant owner, Sam Gordon, greeted the newlyweds at the airport and said he would give Durante a $5,000 check Saturday for the ball. Mr. Gordon will then present the ball to Maris. Durante and his bride will have an all-expenses-paid honeymoon

Oct. 9, 1961 - Whitey Ford (pictured right with Johnny Blanchard and Roger Maris), a double pitching victor for the Yankees, was named the outstanding performer in the world series today by Sport Magazine and received the magazine's seventh annual award of a Chevrolet Corvette sports car. The left-handed Ford shut out the Reds, 2-0, in the series opener and was the winner in the Yankees' 7-0 triumph in the fourth game yesterday. Ford also broke Babe Ruth's 1916-18 series reco

Oct. 9, 1961 - Fred Hutchinson (pictured right with Ralph Houk), the manager of the routed Reds, said after today's game that the Yankees won the series two days ago, in the third game. Hutchinson said, in the silent Reds dressing room: "The turning point came in the ninth inning of Saturday's game. That homer by Roger Maris, the one that beat Bob Purkey, 3-2, was the key to the beginning of the end. We never were the same after that. We had no spark, got no lift, and went no

Oct. 9, 1961 - The Yankees defeated the Cincinnati Reds today, 13-5, and won the world series for the 19th time in 26 attempts. Eight Cincinnati pitchers gave a total of fifteen hits. A five-run first inning started the Yankees to their fourth victory in the five games that this series lasted. Ralph Houk's Bombers routed Joey Jay after he had retired only two batters. This was the Jay whose four-hitter in the second game brought Cincinnati its only victory in the series. So,

Oct. 8, 1961 - The Yankees defeated the Reds, 7-0, today and moved within a game of winning the 1961 world series. Babe Ruth's 43-year-old pitching record of 29 and two-thirds scoreless innings fell along with the Reds. The record was broken by the skillful Whitey Ford (pictured). Ford was able to pitch only five innings before leaving with a bruised toe. But he departed with a world series mark of 32 consecutive scoreless innings. Should the Reds escape another defeat, the s

Oct. 7, 1961 - Two majestic home runs — a pinch homer by John Blanchard in the eighth inning and a drive by Roger Maris in the ninth for his first hit of the series — swept the Yankees back in business today. The two shots, along with two innings of stout-hearted relief pitching by Luis Arroyo, enabled Ralph Houk's Bombers to bring down the Reds, 3-2, as the third game of the series brought the big show to Crosley Field before a gathering of 23,589. The victory gave the Ameri

Oct. 4, 1961 - Virtually every time Yogi Berra picks up a bat or draws a deep breath during a world series, he breaks a record, usually his own. The Yankee catcher-outfielder has played in 69 world series games, more than any other player in history. Going into this series, he held 17 records, including most hits (68), most RBIs (39), and most runs scored (39). #MLB #baseball #yankees #yankeestadium #yankeesbaseball #yankeesfan #yankeeswin #yankeesnation #yankeesstadium #yank

Oct. 4, 1961 - The Yankees defeated the Cincinnati Reds, 2-0, in the first game of the 1961 world series at Yankee Stadium today. Whitey Ford, the 32-year-old left-handed wizard, pitched a two-hitter, and behind him, Elston Howard and Bill Skowron weighed in with homers. Ford's victory was his eighth in world series competition, which is one more than the total of any other pitcher. Even more astounding, the shutout was his third in a row in series play. He blanked the Pirate

Oct. 3, 1961 - Weather permitting, it will be Whitey Ford (pictured), star of the Yankee pitching staff, against Jim O'Toole of the Cincinnati Reds in the opening game of the world series at Yankee Stadium tomorrow. Game time is set for 1 p.m. A crowd of 68,000 is expected to be on hand to see what manner of men these Reds are. Almost nobody expected them to win a National League pennant, but they did. Now, they're being quoted as the 5-to-2 short-enders in the betting, but t

DiMaggio to Throw out First Ball of Series at Yankee Stadium

Oct. 2, 1961 - Governors, mayors, and other politicians will have to step aside for an old ballplayer on Wednesday at Yankee Stadium. The honor of throwing out the first ball of the 1961 world series will go to Joe DiMaggio, the Yankee Clipper of yesteryear. DiMaggio, who will be 47 next month, will be marking the 25th anniversary of his first world series. Now a member of the Hall of Fame, DiMaggio broke in with the 1936 Yankees and batted .346 in the series that year. He pl

Oct. 1, 1961 - After today's game, Roger Maris gave credit to Tracy Stallard (pictured), the Red Sox player whose pitch resulted in Maris's 61st homer of the season. "I appreciate the fact that he was man enough to pitch to me and to try to get me out when he got behind." Stallard, a few hundred feet away in the Red Sox' dressing room, wasn't too worried about his sudden fame. "I'm not going to lose any sleep over it. I'd rather he hit the homer off me than I walk him during

Oct. 1, 1961 - Sal Durante (right), a 19-year-old truck driver from Coney Island, was the fellow who caught Roger Maris's 61st home-run ball of the year as it dropped into Yankee Stadium's right-field stand, 10 rows back and about 10 feet to the right of the Yankee bullpen. For this achievement, the young man won a $5,000 award and a round trip to Sacramento, Calif., offered by a Sacramento restaurant proprietor, as well as a round trip to the 1962 World's Fair in Seattle. In 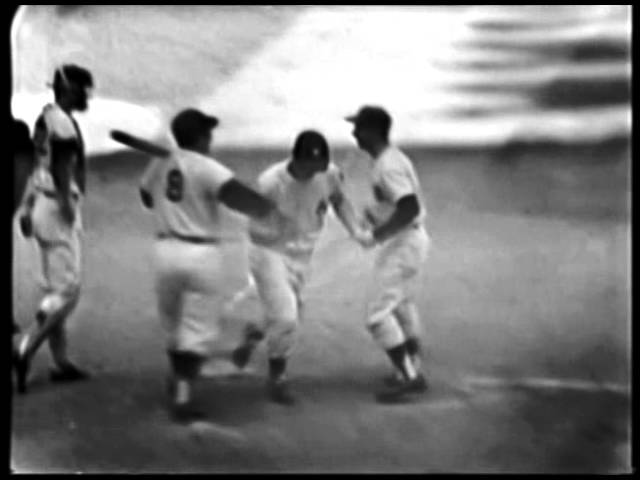 Oct. 1, 1961 - Roger Maris today became the first major league player in history to hit more than 60 home runs in a season. The 27-year-old Yankee outfielder hit his 61st at Yankee Stadium before a roaring crowd of 23,154 in the Bombers' final game of the regular season. That surpassed by 1 the 60 that Babe Ruth hit in 1927. Maris's homer produced the only run of the game as Ralph Houk's 1961 A.L. champions defeated the Red Sox, 1-0. Maris hit his fourth-inning homer in his s