Nov. 15, 1961 - The fantastic confessions by high Soviet figures that amazed the world in the 1930s were obtained by torture, Premier Khrushchev (pictured with Joseph Stalin in 1938) indicated in his speech to the Communist party Congress last month. In light of Mr. Khrushchev’s disclosures, it is clear that all of the celebrated purge trials of 1936, 1937, and 1938 have now been repudiated as frame-ups based upon false confessions extorted through torture. The mystery that r

Oct. 10, 1961 - Fifty thousand Soviet combat troops and ten thousand Polish troops have arrived in Communist East Germany to take part in Warsaw Pact maneuvers near the West German border. An undisclosed number of Czechoslovakian troops have also arrived in the southern part of East Germany. The Polish and Soviet units include paratroopers and other airborne troops. The Poles brought tanks, artillery, at least 650 trucks, and enough field kitchens to provide meals for three d

Sept. 28, 1961 - An official of the Central Intelligence Agency has testified that fomenting riots, infiltrating police forces, and trying to turn the public against the police were favorite Communist tactics. The witness was Lyman B. Kirkpatrick Jr., inspector general of the CIA. He told of the seizure, in Europe, of a Communist handbook teaching techniques for riots against the police. Few demonstrators engaging in a riot realize they are being led and used by trained Commu 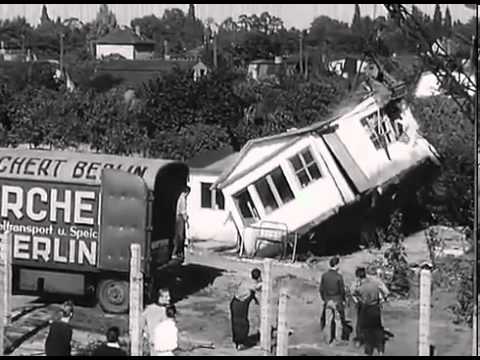 Sept. 25, 1961 - Former President Eisenhower commended President Kennedy's U.N. speech today. He said he believed "it summed up, eloquently, the peaceful aims of the American people." The general's remarks were given from the front steps of the red-brick house on the campus of Gettysburg College which he uses as an office. The former President said that it was apparent President Kennedy was standing on the same ground in foreign policy which he - General Eisenhower - had occu

Sept. 25, 1961 - President Kennedy said today that the Western powers would stand firm on West Berlin, but he emphasized that they wished to negotiate and were not committed to a "rigid formula." In a 38-minute address before the U.N. General Assembly, the President warned of the danger of a nuclear war if the Soviet Union should attempt to override Western interests and commitments without engaging in negotiations "rooted in mutual respect and concern for the rights of other

Robert Kennedy says President Would Use Nuclear Weapons if Necessary

Sept. 24, 1961 - Attorney General Robert F. Kennedy said today that there "is no question" that his brother, President Kennedy, would order use of nuclear weapons if they were essential to save West Berlin's freedom. The Attorney General, on NBC's "Meet the Press," said: "If we retreat, we will never be able to stand up again. The President has said again and again that if we don't stand up in Berlin, when can we stand up?" He predicted that Premier Khrushchev would continue

Sept. 21, 1961 - Connie Francis (pictured), Louis Armstrong, Sid Caesar, and the comedy team of Rowan and Martin are among the performers Ed Sullivan has lined up for his trip to Berlin. The TV producer and host said today he expected to leave here Sept. 30 to put on shows for military personnel in Germany. Two shows in West Berlin will be taped for telecast by CBS. Mr. Sullivan said he had not altered his plans in any way because of the recent controversy resulting from TV s

Sept. 19, 1961 - The Soviet Union suggested today that the United Nations consider transferring its headquarters from New York to West Berlin. Moscow indicated it would support such a move if the Western powers accepted a Soviet demand to terminate the Allied occupation of West Berlin by converting it into a free city. U.S. officials and foreign diplomats in Washington have informally discussed the possibility of such a move. The feeling is that the idea is impractical, beca

Sept. 17, 1961 - Former President Harry S. Truman talked of many things during a two-hour interview last night with David Susskind. Some of his observations during the "Open End" program: Juvenile delinquency - "There's no more in proportion to the population than there was when I grew up, only we could cover it up because there wasn't so much reporting as there is now." Coexistence - "I hate that word, because there is no such thing. You can't do anything as far as the Russi

Refugee from East Berlin Her Gets Dog Back

Sept. 16, 1961 - It is not only humans who are bothered by the Communist wall across Berlin - dogs are affected as well. A fox terrier named Mausi finally got back to his mistress in the West today. An East German policeman at Friedrichstrasse led the dog on a leash to the border and then turned him loose. Mausi dashed across the border and leaped into the arms of his owner, a hospital nurse, and licked her face. She had been waiting three days at the crossing point to see if

Sept. 16, 1961 - The United States and the Soviet Union detonated nuclear devices today. Both were announced in Washington by the Atomic Energy Commission. The U.S. test, the second in two days, was again fired underground in Nevada. It was described as being of "low yield." The Soviet test was fired in the atmosphere at Novaya Zemlya, a Siberian test center, and was the 11th since Moscow broke the 3-year-old unofficial moratorium on nuclear tests. Like the others, it was fir

Sept. 14, 1961 - President Kennedy has set up a Cabinet-level group to draft a program for waging psychological and political tactics in the Cold War. The Communists' apparent ability to repress world reaction unfavorable to them and to dominate the news with demonstrations that seem spontaneous led to the creation of the group. When the Russians resumed nuclear testing and many nations accepted the news apathetically, Administration officials were appalled. If the U.S. had u

Soviets Conduct Yet Another Atomic Test

Sept. 12, 1961 - The Soviet Union conducted the seventh atomic test in its current series by detonating a multi-megaton device in the atmosphere early today at its Arctic proving ground. The Atomic Energy Commission said the detonation, presumably of a hydrogen bomb, took place in the vicinity of the island of Novaya Zemlya (pictured). The island, which lies between the Barents and Kara Seas, has been used by the Soviets in recent years to test large thermonuclear weapons. On

Sept. 9, 1961 - The United States will send about 40,000 Army troops to Europe "in the immediate future" to strengthen combat and support forces there, the Pentagon announced today. The announcement was expected. It was the latest in a series of moves, including the call-up of military reserves and plans for a broad expansion of the armed forces, that President Kennedy has undertaken to cope with the crisis in Berlin and other trouble spots. #germany #berlin #communism #commu

Sept. 9, 1961 - The Pentagon took action against two Army officers in Berlin today for having permitted the use of U.S. forces in the filming of a Jack Paar television show. Col. John R. Deane Jr. (pictured), commanding officer of the Second Battle Group, Sixth Infantry, in Germany, was admonished for "exercising poor judgment." The Defense Department also announced that Lieut. Col. Dallas Hoadley, public information officer of the Berlin Command, had been relieved of his dut

Senators Decry Use of Military for Paar Show in West Berlin

Sept. 8, 1961 - "Shocking," "disgraceful," and "highly dangerous" were descriptions applied by Senators today to describe the use of U.S. Army forces in the filming of a Jack Paar television show in West Berlin yesterday. The Defense Department, with White House approval, ordered an investigation. Majority Leader Mike Mansfield told the Senate that the situation in Berlin was a world tragedy, not a television spectacular "to be made into some kind of game for the personal pro

Sept. 7, 1961 - Following are some of the main points made by Soviet Premier Nikita Khrushchev (pictured with President Kennedy at their conference in June) in an interview today with C.L. Sulzberger, foreign affairs columnist of The New York Times: 1. Summit Meeting - Premier Khrushchev favors a second meeting with President Kennedy. 2. Germany - The Soviet Premier insists on separate peace treaties with the two Germanys and a free city status for West Berlin, with the East
1
2345