Sept. 15, 1962 - Opening today is “Convicts Four,” prison film drama starring Ben Gazzara. The film is a fictionalized version of the life of death row convict John Resko, who wrote an autobiography called “Reprieve.” On February 5, 1931, Resko and an accomplice, Frank Mayo, killed a grocer, Samuel Friedberg, during an attempted robbery of his store in the Bronx. Resko confessed to the crime. Although he was sentenced to death, the jury recommended clemency for Resko, who was

Movies: “Paris When It Sizzles”

Sept. 9, 1962 - Tony Curtis has been signed for a principal role in “Paris When It Sizzles,” the comedy starring William Holden and Audrey Hepburn. The film will be directed in Paris by Richard Quine from a script by George Axelrod for Paramount release. The sprightly young assistant (Hepburn) of a Hollywood screenwriter (Holden) helps him over his writer's block by acting out his fantasies of possible plots. #classicmovies #1960s #OTD #movies

Sept. 5, 1962 - The only American entry at the Venice Film Festival, “Birdman of Alcatraz,” received a warm reception today. Spectators interrupted the film four times with applause. At the end, they rose to their feet and gave a warm tribute to Burt Lancaster, the picture’s star, who attended the screening. Mr. Lancaster (pictured singing at a party after the screening) is considered a favorite to win male acting honors for his portrayal of a prison inmate who became an expe

Marriage of Loren and Ponti Annulled

Sept. 3, 1962 - A judge in Juarez, Mexico, annulled the marriage of Sophia Loren and producer Carlo Ponti today, untangling a legal situation that had caused the couple to face a bigamy trial in Italy. The annulment was posted today by Judge Carlos Uranga Muñoz of the Third Civil Court. The pair were married Sept. 17, 1957, by proxy with two lawyers acting for them in Juarez. The bigamy charges were brought against the actress and Mr. Ponti because Italy does not recognize di

Aug. 31, 1962 - New York lawyer James B. Donovan met with Premier Fidel Castro for four hours today and reported that their negotiations on the release of Cuban prisoners “are progressing.” Mr. Donovan came to Havana yesterday for talks with the Castro government about the release more than 1,100 remaining prisoners taken in the abortive invasion at the Bay of Pigs in April 1961. Castro has asked ransoms totaling $62 million for the prisoners, who are locked inside Principe C

Edward G. Robinson, Recovered from Heart Attack, Back at Work

Aug. 30, 1962 - Edward G. Robinson (pictured left with Red Buttons), who suffered a heart attack 11 weeks ago, announced in London today that he was well and would return to work Monday. The 69-year-old actor said he would report to nearby Shepperton Studio to complete the filming of “Sammy Goes South,” which began in Africa. The film has had a difficult production period. In addition to Mr. Robinson’s heart attack, several cast members were bitten by snakes. #classicmovies #

Aug. 27, 1962 - An American film made on a shoestring stole the show today at the 23rd Venice Film Festival. It was “David and Lisa,” directed by a relatively unknown Theatre Guild producer named Frank Perry. The film tells the story of David, a bright young man (Keir Dullea, left) suffering from a mental disturbance which, among other symptoms, has instilled in him a fear of being touched. This lands him in a residential treatment center, where he meets Lisa (Janet Margolin)

Cukor Prepares to Direct “My Fair Lady” with Audrey Hepburn

Aug. 23, 1962 - George Cukor (right), who will direct the film version of “My Fair Lady” for Warner Brothers, said that he should be ready to start rehearsals for the musical early in January, with shooting in June. The director is leaving for Europe this weekend to check London locations with the set designer and to confer with the star, Audrey Hepburn. The musical, he said, will be made in “standard” screen dimensions on a budget of about $10 million. This will be the fourt

Aug. 23, 1962 - Hoot Gibson (pictured in 1936), one of Hollywood’s most famous cowboy stars, died this morning of cancer at the Motion Picture Country House and Hospital in Woodland Hills, Calif. He was 70 years old. His last film appearance was in 1959 in a bit part in John Wayne’s “The Horse Soldiers.” Mr. Gibson’s film career blossomed in 1925, and for about five years he was one of Hollywood’s leading stars. His salary during these golden days was $14,500 a week, and he w

Movies: “Mutiny on the Bounty” with Marlon Brando

Aug. 22, 1962 - “Mutiny on the Bounty” will have its world premiere at New York’s Loew’s State Theatre Nov. 8. The film will be presented on a reserved seat basis, with 10 performances each week. Marlon Brando, Trevor Howard, and Richard Harris appear in the MGM release, which was directed by Lewis Milestone. #classicmovies #1960s #OTD #movies

Aug. 20, 1962 - “Billy Rose’s Jumbo,” an MGM musical with Doris Day, Stephen Boyd, Jimmy Durante, and Martha Raye, will be the Christmas attraction at the Radio City Music Hall. Charles Walters directed the production, which has songs by Richard Rodgers and the late Lorenz Hart and choreography by Busby Berkeley. #classicmovies #1960s #OTD #movies

Aug. 17, 1962 - The coroner of Los Angeles, Dr. Theodore J. Curphey (center), announced today that Marilyn Monroe’s death was probably a suicide. The cause was an overdose of barbiturates. He said toxicologists had also discovered that the 36-year-old film star had taken a large dose of chloral hydrate, commonly known as “knockout drops.” The coroner’s summary confirmed reports that Miss Monroe had attempted more than once to take her life with an overdose of sedatives. On th

Aug. 16, 1962 - Bella Darvi (pictured), the French motion picture actress, was found unconscious before dawn today in her hotel room in Monte Carlo and rushed to a hospital in serious condition. The police said Miss Darvi had taken an overdose of barbiturates. A hospital spokesman said she regained consciousness four hours after being admitted. Friends said she had angrily walked out of a club just before midnight after quarreling with several other patrons. #classicmovies #1

Aug. 15, 1962 - United Artists and Cinerama have made a deal whereby two major United Artists movies will be filmed in Cinerama. The pictures are “The Greatest Story Ever Told,” scheduled to begin next month, and “It’s a Mad, Mad, Mad, Mad World,” which has been before the cameras since April 26. “The Greatest Story Ever Told,” which will be directed by George Stevens, is based on Fulton Oursler’s book about the life of Christ. Carl Sandburg helped to write the screenplay. “I

Aug. 13, 1962 - Actress Betsy Drake (pictured right in 1952) divorced Cary Grant today, charging that the 58-year-old actor had caused her “grievous mental suffering.” She said she and Mr. Grant had separated 4 years ago; they were married in 1949. This was Mr. Grant’s third marriage. He has no children. #classicmovies #1960s #OTD #movies #divorce

Aug. 13, 1962 - Two days ago in New York City, a twenty-eight-year-old woman drowned herself in a bathtub on East Tenth Street, a laborer in Staten Island shot himself, and a prominent executive plunged from the eighth floor of his apartment on Washington Square West. Before the day was over, there were 12 suicides — 10 more than the daily average in New York City. The total was an unofficial record for New York in recent years, according to John A. Foley, administrative assi

Aug. 9, 1962 - A retrospective survey of dance films made by Gene Kelly has been scheduled to follow the well-received Howard Hawks series at New York’s Museum of Modern Art. The actor-dancer-director-choreographer will be represented by nine complete films and dance excerpts from two others in the five-week series. He will be the museum’s guest of honor at a reception in connection with the series. Such former collaborators as Judy Garland, Leonard Bernstein, Cyd Charisse, B 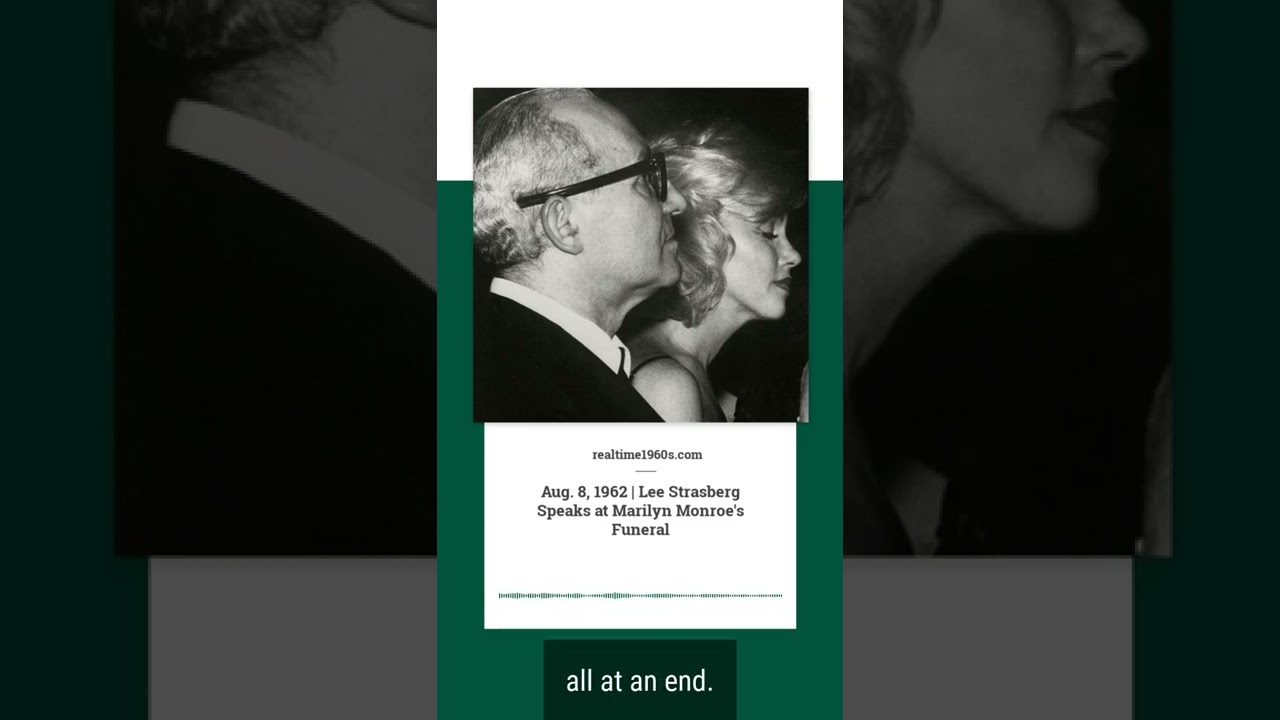 Aug. 8, 1962 - Actors Studio Director Lee Strasberg, who had befriended and coached Marilyn Monroe in recent years, delivered the eulogy today at her funeral in Hollywood. The 36-year-old actress died Sunday of a massive overdose of barbiturates. #classicmovies #movies #marilynmonroe #suicide
12
3
45