July 27, 1961 - A total of 159 Negroes dined at 36 previously all-white restaurants and cafeterias in Dallas today. The Dallas Citizens Council, which helped arrange the integration step, said that only four telephone calls of protest had been received. The eating places that were integrated reported three complaints from white customers. The city has a population of 850,000, of which about one-fifth are Negroes. A. Mayfield Smith, a Negro leader, said: "The experience was a

July 25, 1961 - Grace Bumbry, American Negro singer, was hailed today in Bayreuth for her performance as Venus in Wagner's "Tannhäuser" despite protests by some Germans. The complainers said that a Negro should not be allowed to sing the Venus role at the annual festival because she wasn't Nordic. Today, West Germany's music critics were singing Miss Bumbry's praises. Die Welt of Hamburg called Miss Bumbry a "big discovery" and the Süddeutsche Zeitung of Munich called her "th

July 24, 1961 - A Southern broadcaster said today that TV stations in his region were "getting it from our own people" because of network coverage of racial problems in the South. Walter J. Brown, president of WSPA-TV in Spartanburg, S.C., cited a letter from a woman who called for the establishment of a Southern TV network. Mr. Brown said that the problem had come to a climax with coverage of the Freedom Bus riders, which he believes the networks have "overplayed." He has su 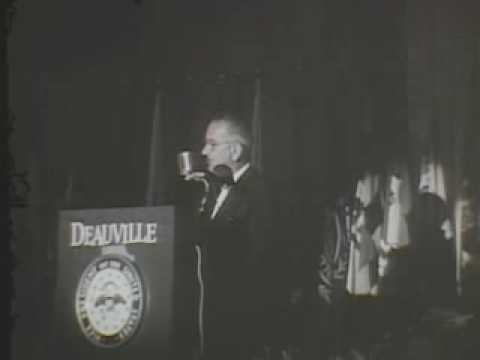 July 23, 1961 - About 75 Negroes staged "wade-ins" at six spots on Ft. Lauderdale, Fla., beaches today, and one was arrested on a disorderly conduct charge. Police Sgt. John Miller said there was some "sand throwing." He identified the woman arrested as Geneva Smith, 44 years old. "At some places the whites sort of forced them off the beach by massing in numbers," Sgt. Miller reported. At other places, he said, the Negroes spread blankets on the beach and waded in. #civilrigh

July 22, 1961 - Richard Wagner's grandson today angrily rejected protests against the choice of Grace Bumbry (pictured), a Negro mezzo-soprano, as Venus in tomorrow's performance of "Tannhäuser," which opens the annual Wagner Festival in Bayreuth, Germany. "I will take black, yellow or brown artists if the production needs them," said Wieland Wagner, festival director. "Did Richard Wagner ever say that any role should be sung only by the possessor of a particular skin color?"

July 21, 1961 - Attorney General Robert F. Kennedy today urged the nation's clergymen, especially those in the South, to take a more active role in fighting racial discrimination. The President's brother was quoted by a delegation of clergymen as having said: "I do not see how anyone can wear a collar and not speak out against this evil." The delegation was composed of seven clergymen, white and Negro ministers of several denominations and one rabbi. The seven flew to Washing

July 17, 1961 - James B. Conlisk (pictured), Superintendent of the Police, appealed today for a sense of community responsibility to ease Chicago's racial tension. At a news conference Mr. Conlisk declared: "It is the duty of Negroes and whites to foster good relations." He sent 27 more policemen to the near West Side, a predominantly Negro area. It is an area in which roving gangs of Negro teenagers beat at least 11 white persons last week in what appeared to be reprisals fo

July 16, 1961 - Two hundred policemen arrested nine white men today at Rainbow Beach in Chicago. The arrests were made for refusing to obey police orders. Surly groups of white men milled around an area where about 200 Negroes were staging "wade-in" demonstrations. There were 10,000 white persons at the beach when the police began making arrests. Except for the demonstrators, there were no Negroes at the beach. The Negro demonstrators dispersed quietly while the police were b

NAACP Has Praise and Criticism for President Kennedy

July 12, 1961 - Members of the NAACP called on President Kennedy today to praise and criticize his actions on civil rights. Bishop Stephen Spottswood (second from left), chairman of the NAACP board of directors, praised actions by the Justice Department in the Alabama bus riots and voter registration cases in Mississippi and Louisiana. "We hail these steps you have taken," the Bishop said, "but there is urgent need to buttress Executive action with legislative action in the C

July 7, 1961 - Eight more Freedom Riders were arrested in Jackson, Miss., today after refusing orders to leave the white waiting room of the Trailways bus station. These arrests brought to 177 the number of integrationists who have been taken into custody on breach-of-the-peace charges since late May. Last night, the Rev. Martin Luther King Jr. told a crowd of 2,500 integrationists that "segregation is dead." The only question remaining, Dr. King said, "is how expensive
1
2