Mar. 23, 1962 - President Kennedy said today that the democratic world could look forward to the future with “a new confidence.” The tide of history, he asserted, favors freedom over totalitarianism. Mr. Kennedy sounded his note of optimism before a crowd of 86,000 persons gathered in the University of California’s football stadium in Berkeley. “The wave of the future is not the conquest of the world by a single dogmatic creed,” he declared, “but the liberation of the diverse

Mar. 23, 1962 - President Kennedy witnessed a successful launching of an Atlas-D missile at Vanderberg Air Force Base in California today. Mr. Kennedy watched from a vantage point 6,000 feet away as the slim white missile rose and arched away on a course that took it more than 5,000 miles into the Pacific. Mr. Kennedy’s only recorded comment was: “McHugh is saved.” This was a joking reference to Brig. Gen. Godfrey T. McHugh, the President’s Air Force aide, who had assured him

Mar. 22, 1962 - Marian Anderson, the contralto, exchanged mementos with President Kennedy today. Their meeting preceded a concert she gave in Washington tonight for top officials and diplomats. Miss Anderson presented Mr. Kennedy with her latest record, “Spirituals,” and received a reproduction of the Inauguration emblem in return. After a brief visit with the President, she had lunch with wives of Cabinet members. Miss Anderson said she did not expect the President to attend

Mar. 22, 1962 - Mrs. Jacqueline Kennedy received a horse today from President Mohammad Ayub Khan of Pakistan. She also saw the Shalamar Gardens, of which she said: “It’s even lovelier than I dreamed.” Mrs. Kennedy spent an hour and a half at Lahore’s biggest social event of the year, the Pakistani National Horse and Cattle Show. Mrs. Kennedy gave some indication of her reaction to the hospitality shown her when she stood for 30 seconds before a microphone in the 320-year-old

Mar. 21, 1962 - Richard M. Nixon declined today in the face of a Presidential denial to alter his contention that Senator John F. Kennedy (pictured with Allen W. Dulles in July 1960) had taken advantage in the 1960 campaign of confidential C.I.A. briefings on Cuban invasion preparations. The former Vice President’s assertion was made this week in a magazine excerpt from a forthcoming book, “Six Crises.” He said today: “President Eisenhower [now vacationing at nearby Palm Dese

President Reflects on Plight of Reservists

Mar. 21, 1962 - President Kennedy (pictured aboard the PT-109 in the South Pacific in 1943) commiserated today with impatient Reservists who were mobilized in the Berlin crisis last fall and now are clamoring to be released. “There is always inequity in life,” the President observed philosophically at his news conference. Some Reservists, he noted, had been called back to active duty even after apparently fulfilling their military obligations, while others continued a “normal

Mar. 21, 1962 - The Administration bill to add medical care for the aged to the Social Security system has a “good chance” of passage this year, President Kennedy indicated today. At his news conference, Mr. Kennedy rebuked those who argue that his bill would be the opening wedge for socialized medicine. On that point, Mr. Kennedy declared with some emphasis: “Well, it’s an old argument, when a case is lost, to argue that it’s all right here, but what’s it going to mean for t

Mar. 21, 1962 - Following are some of the highlights of President Kennedy’s press conference:  Space — The President said he was “gratified” at the interest expressed by Premier Khrushchev in space cooperation. Cuba — The President said the U.S. would defend itself if it were attacked anywhere, but that he had no information about a threat to the naval base at Guantanamo Bay in Cuba. Geneva — He said that the disarmament talks should continue, but he noted a “basic difference

Mar. 21, 1962 - President Kennedy said today that he had no evidence of an impending Cuban attack on the U.S. naval base at Guantanamo Bay. He added at his news conference that the U.S. was always prepared to defend any territory under its responsibility. The President’s statement was made in response to a question about possible plans for increasing the base’s defenses in view of reports of a Cuban military buildup. The President said that “we are always concerned about the

Mar. 21, 1962 - Mrs. Jacqueline Kennedy arrived in Pakistan today to a rousing welcome in which the accent was on the nation’s friendly bonds with the U.S. The President’s wife flew to Lahore after a carefree half hour with Prime Minister Jawaharlal Nehru at the conclusion of her visit to India. They dabbed each other with moist red powder to mark one of the happiest of Hindu holidays. Shortly after being presented with twin tiger cubs in Mr. Nehru’s garden in New Delhi, the

Mar. 21, 1962 - Premier Khrushchev accepted today President Kennedy’s proposal for talks between the two countries on practical cooperation in space research. In a message to Mr. Kennedy, the Soviet leader declared that problems of exploration and peaceful use of outer space “demand an extensive pooling of scientific and material resources by states.” While cautioning that cooperation in space would be limited until conclusion of an agreement on complete disarmament, Mr. Khru

Mar. 19, 1962 - Mrs. Jacqueline Kennedy rode an eight-foot-high elephant around a 17th-century palace courtyard today. After the elephant had stomped about for 10 minutes, Mrs. Kennedy said, “Good-by and thank you” to both the driver and the elephant. The elephant, a 35-year-old female named Bibia (baby) raised a front leg and its trunk in salute. Later, the wife of President Kennedy went to the sprawling white home of the Maharaja of Jaipur and his Maharani, Gayatri Devi, a

Mar. 19, 1962 - Richard M. Nixon has charged in a new book that President Kennedy endangered security restrictions in 1960 with his campaign call for intervention in Cuba. Mr. Nixon wrote Mr. Kennedy had been given a secret intelligence briefing in which he was told that the Eisenhower Administration was training Cuban exiles for an invasion of Cuba. The briefing was given by Allen Dulles, then director of the C.I.A., Mr. Nixon said. It came before Mr. Kennedy declared on Oct

Mar. 18, 1962 - Mrs. Jacqueline Kennedy received today the traditional welcome that Rajasthani Indians accord a woman they respect and love: she was garlanded and got a dab of brown paint on her forehead. A coconut encased in silver — a symbol of a highly auspicious occasion — was also presented to her. President Kennedy’s wife arrived in Jaipur, the capital of Rajasthan, by air from Udaipur. Before leaving Udaipur, Mrs. Kennedy attended mass in the small chapel of St. Paul’s

Mar. 16, 1962 - Mrs. Jacqueline Kennedy paid a visit today to the holy Hindu city of Benares. Later, Mrs. Kennedy received a cheering reception as she arrived in Udaipur, a one-time major capital of princely India. Tens of thousands of Indians surged about the open car that carried the First Lady from the airport to the palace of the Maharana of Bhagwasinghji. At Benares, Mrs. Kennedy rode in a launch up and down the murky green Ganges, the most sacred river in Hindu mytholog

Mar. 15, 1962 - Mrs. Jacqueline Kennedy took a short course in Indian history today. It began with a tour of the sprawling abandoned city of Fatehpur Sikri, which dates to the 16th-century reign of the Mogul Emperor Akbar the Great. It ended with a visit by moonlight to India’s fabled white marble mausoleum, the Taj Mahal. The wife of the President went to the 300-year-old Taj Mahal twice. After her first visit, shortly before sunset, her car was mobbed by surging, cheering c

President Kennedy Says Youngest Brother Runs for Senate "On His Own"

Mar. 14, 1962 - President Kennedy said today that Edward M. Kennedy, his youngest brother, was running “on his own” in the primary campaign for Senator from Massachusetts. “I will not take part in that campaign, except I will go to vote in the primary in September,” the President said at his news conference. However, Attorney General Robert F. Kennedy, another brother, hinted that the President might campaign for Edward if he won the right to opppose George Cabot Lodge, the p 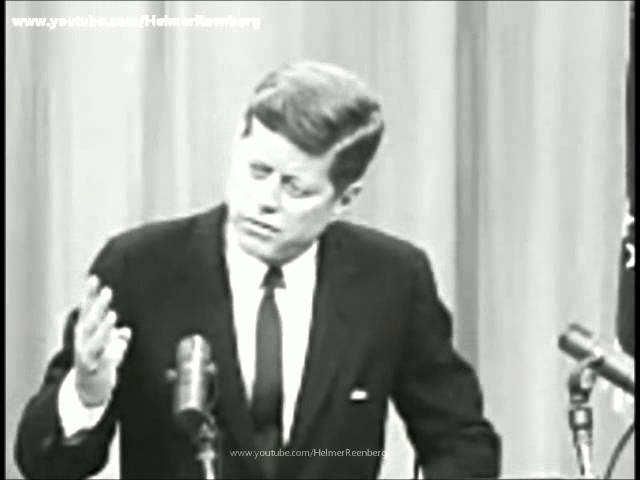 Mar. 14, 1962 - Mrs. Jacqueline Kennedy made friends with an elephant today. “She’s so cute,” the President’s wife said after a 10-minute visit with the 600-pound animal. The 11-month-old elephant is named Urvashi, after a mythical dancer in an ancient Hindu court. The animal was taken from the Delhi Zoo to Prime Minister Jawaharlal Nehru’s garden for the First Lady to see. Later, Mrs. Kennedy went riding and jumping on horseback with mounted bodyguards of the Indian Presiden

Mar. 14, 1962 - Following are the highlights of President Kennedy’s news conference today: Berlin — The President said Soviet harassment in the Berlin air corridors made it more difficult to get an accord on Belin. Secretary of State Dean Rusk is protesting vigorously at Geneva. Disarmament — He made public a letter to Mr. Rusk putting priority on achieving a nuclear test ban at the Geneva conference. He said it would be in the United States’ interests to have no more tests b
1
2
345