Nov. 28, 1961 - President Kennedy told the Soviet people today that they could live in peace if their Government halted its efforts to promote conspiratorial communism throughout the world. In a long-sought opportunity to give the Russians his unfiltered views on the Berlin crisis, nuclear testing, disarmament, and the general deterioration in East-West relations, the President calmly but firmly blamed the Kremlin for major tensions. His words were faithfully reproduced in to

Kennedy to Replace Under Secretary of State Bowles

Nov. 26, 1961 - President Kennedy announced today the replacement of Chester Bowles (right) as Under Secretary of State. Nine other changes in the White House and State Department staff were announced in the first big shake-up of the 10-month-old Kennedy Administration. George W. Ball will succeed Mr. Bowles in the State Department’s No. 2 position. Informed persons said that Mr. Kennedy was determined to overcome what he appraised as super-caution and lack of imagination amo

Nov. 26, 1961 - President Kennedy took a ride after church today to watch his wife and other Kennedys ice skate. They went to the Joseph P. Kennedy Jr. Memorial Rink, which the family foundation built for Hyannis Port, Mass., in memory of the President’s older brother (pictured just before his death in 1944), who was killed in World War II. Along with Mrs. Kennedy, Attorney General Robert F. Kennedy and his wife Ethel were out on the ice, along with several Kennedy children.

Nov. 25, 1961 - Caroline Kennedy celebrated her fourth birthday today. The daughter of President and Mrs. Kennedy will be 4 years old Monday. Her brother John Jr. is one year old today, but he missed the party because of a slight cold. He remained in Washington over the Thanksgiving holiday weekend. Pierre Salinger, White House press secretary, said a “small party” was held at Joseph P. Kennedy’s home, across the lawn from the home of his son, the President. In attendance wer

Nov. 25, 1961 - President Kennedy granted an exclusive interview today to the editor of the Soviet Government newspaper. Aleksei I. Adzhubei (center), editor of Izvestia and son-in-law of Premier Khrushchev, said he came away with “a very good impression” of Mr. Kennedy. “He is a young President of a great country,” the visitor said. “All of you should be proud of that.” If President Kennedy gave his visitor a big news break, the Soviet editor kept it to himself. “Subscribe t

Nov. 22, 1961 - President Kennedy came home today to celebrate a Thanksgiving 340 years and 40 miles removed from the original. The President’s mother will set the table in the “big house” tomorrow for 28 members of the family spanning 3 generations. Thirteen adults and fifteen children, not counting house guests, will be served New England roast turkey with cranberry sauce. The big house is the home of Mr. and Mrs. Joseph P. Kennedy, the President’s parents. #JFK #jfkfiles # 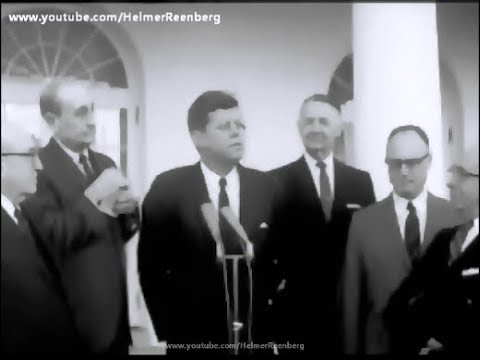 Nov. 20, 1961 - John Fitzgerald Kennedy Jr. flashes a happy smile in official birthday pictures released today by the White House. He will celebrate his first birthday Saturday, presumably at Hyannis Port, Mass., where the Kennedys plan to spend Thanksgiving weekend. John Jr. returned to the White House this afternoon with his mother and his sister, Caroline, who will be 4 Monday. With today’s pictures, the White House also released statistics on John Jr. He is healthy, weigh

Nov. 19, 1961 - President Kennedy spoke out last night against the right-wing John Birch Society and the so-called Minutemen in a speech at a Democratic party dinner in Los Angeles. The President mentioned neither group by name but left no doubt whom he meant. “There have always been those fringes of our society who have sought to escape their own responsibility by finding a simple solution, an appealing slogan, or a convenient scapegoat,” Mr. Kennedy said. “They find treason

Speaker Rayburn is Buried in Texas

Nov. 18, 1961 - House Speaker Sam Rayburn was buried today in the rich Texas earth that nurtured him. Funeral services were held in the First Baptist Church he had helped to build in Bonham, Tex. President Kennedy and former Presidents Dwight D. Eisenhower and Harry S. Truman were in the front row with the Speaker’s long-time friend, Vice President Johnson. Mr. Rayburn was Speaker of the House longer than any other man in history. “In the liberties and freedoms of our country

Nov. 18, 1961 - President Kennedy declared last night that the nation should regard with pride the “heavy burden” of preserving freedom in the world. “Only the United States and our power and strength and commitments permit dozens of other countries scattered all over the globe to maintain their freedom,” the President said. “Other countries look to their own interests,” he said. “Only the United States bears this kind of burden.” Mr. Kennedy spoke to about 1,200 Arizonans wh

Nov. 16 - After his speech at the University of Washington, President Kennedy paid high tribute to Senator Warren G. Magnuson (left), Washington’s Democratic senior Senator. Senator Magnuson is celebrating his 25th year in Congress and also is seeking re-election. At a dinner in honor of Mr. Magnuson, the President spoke of the development of the Northwest area since the Senator’s first election to Congress in 1936. “Those who bet on the United States — those who were bulls a

Sen. Carl Hayden Next in Line for Presidency after Johnson

Nov. 16, 1961 - The death of Speaker Sam Rayburn places Senator Carl Hayden (right), Democrat of Arizona, behind Vice President Johnson in the line of succession to the Presidency. Had the House been in session, it would have elected a new Speaker who would hold second rank. Congress does not meet until Jan. 10, and Mr. Hayden holds the place until then. The election of a Speaker will be one of the first items of business for the House. Mr. Hayden, 84, temporarily moves up in

Nov. 16, 1961 - Here is Vice President Johnson’s statement on the passing of his friend and colleague of long standing, Speaker Sam Rayburn (pictured right at last year’s Democratic National Convention): “The capital is a lonely place without him. The good people of the world have lost a companion and an ally. He was always there when he was needed. His voice and his judgment were heard and respected. In the end, it all added up to one thing: He did what was right.” #JFK #jfk

President Speaks at University of Washington

Nov. 16 - President Kennedy declared today that it was “a test of our national maturity” to accept the prospect that negotiations on Berlin and other world problems might not lead to either victory or defeat. Such negotiations, he said, “are likely to be successful only if both sides reach an agreement which both regard as preferable to the status quo, an agreement in which each side can consider that its own situation has been improved.” On the other hand, he asserted, this

Nov. 16, 1961 - Following is President Kennedy’s expression of tribute and statement of regret at the death today of Sam Rayburn (left), Speaker of the House of Representatives: “Mr. Kennedy and I join the nation in mourning the death of Speaker Rayburn. His public service stretched from the Administration of President Woodrow Wilson to the present day, but it was the quality of that service more than its length that was so distinctive. He had an instinctive understanding of

Nov. 16, 1961 - House Speaker Sam Rayburn died of cancer in his sleep today. He was 79 years old. President Kennedy led the nation — Republicans and Democrats alik — in mourning Mr. Rayburn as a great American. Mr. Kennedy and former President Harry S. Truman will lead mourners at the funeral Saturday in Bonham, Tex. Mr. Rayburn, who served longer as Representative and Speaker than any other man in history, will lie in state tomorrow at the Sam Rayburn Library for 24 hours wh

Nov. 14, 1961 - President Kennedy told two little White House visitors today that they were better behaved than his own children. Sheila McGrath, 7 years old, is mentally disabled, while Kammy McGrath, 5 years old, is not. The President smiled as he took Sheila by the hand and led her toward a hobby horse in one corner of the Cabinet room. “You want to come over with me?” he asked gently. “Attagirl.” Sheila got on the hobby horse and rocked briefly. Then he reached into the p

Nov. 13, 1961 - President Kennedy received the gift of a Sacred Torah from the Union of American Hebrew Congregations in the Rose Garden of the White House today. Rabbi Maurice N. Eisendrath, who presented the 18th-century scroll to the President, said that the Torah was a “symbol of man’s divinely inspired search for a life of freedom and justice. It contains, as you well know, those teachings which undergird this nation under God.” Turning to Rabbi Eisendrath, the President 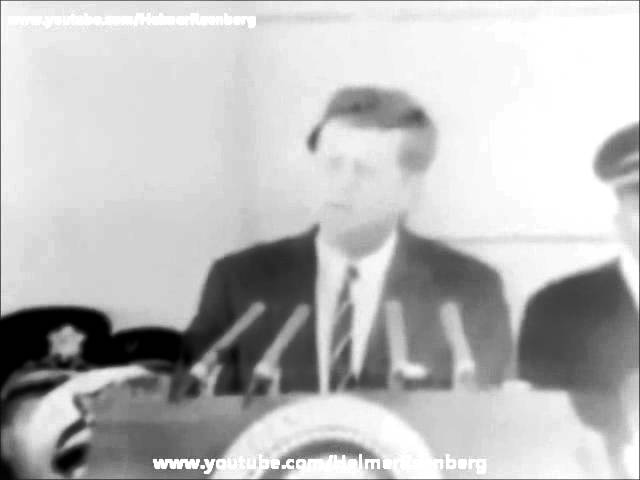