Dec. 14, 1961 - President Kennedy established today a commission headed by Mrs. Eleanor Roosevelt to advance the cause of women’s rights. The President said the group, known as the President’s Commission on the Status of Women, would make studies of “all barriers to the full partnership of women in our democracy.” He said he expected the commission to report by Oct. 1, 1963, on what remained to be done to “demolish prejudices and outmoded customs.” The emphasis in the Preside

Dec. 13, 1961 - President Kennedy will deliver a traditional Christmas message to the nation from Washington next Wednesday, the White House announced today. The speech will be the highlight of ceremonies along with the lighting of the national community Christmas tree behind the White House. The ceremonies will be televised nationally, beginning at 5 p.m. Mrs. Kennedy is not expected to be in Washington for the ceremony. She will stop off in Palm Beach next Monday when the P

Dec. 12, 1961 - Mrs. Kennedy visited the District of Columbia Children’s Hospital with two baskets full of gifts today. The First Lady spent a half hour visiting with some of the 200 patients in the hospital and saw that each got one of the presents — a transparent Christmas tree ornament with the figure of a musician inside. A 5-year-old boy in one of the wards bounded up and greeted her: “Hello, Mrs. Santa Claus — I mean, Mrs. Kennedy.” Several of the children, especially t 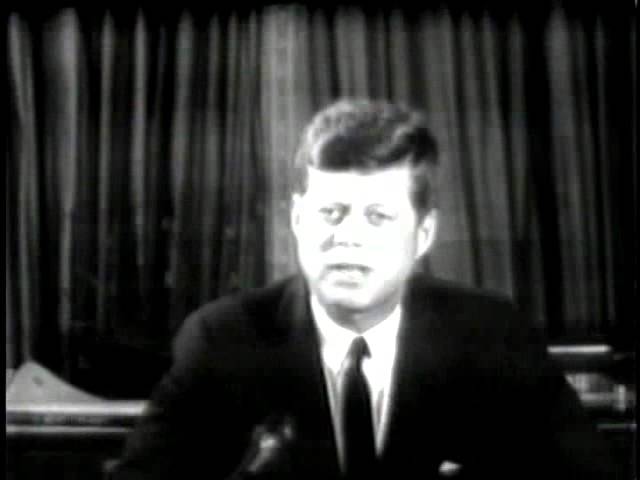 Dec. 8, 1961 - President Kennedy relaxed at his father’s beach house in Palm Beach, Fla., today after three days of speech-making in New York and Florida. He swam in the pool at the house, rested, and read documents brought with him from Washington. The President went out once to attend a 10 a.m. mass at St. Edward’s Roman Catholic Church for the Feast of the Immaculate Conception. He was accompanied by David F. Powers (right), a White House aide. #JFK #jfkfiles #jfkassassina

Dec. 8, 1961 - Selected members of the Kennedy Administration, including several Cabinet officers, have been attending weekly lectures on various subjects. The gatherings are held at the home in McLean, Va., of Attorney General Robert F. Kennedy. The Attorney General and his wife developed their enthusiasm for seminars on a skiing vacation at Aspen, Colo. They were said to have seen the device in operation at the Institute for Humanistic Studies. The opening lecture on Nov. 2

Dec. 7, 1961 - President Kennedy (pictured speaking to a young supporter) told the national convention of Young Democratic Clubs today to give its attention to the nation’s real problems and not to outmoded political slogans. Mr. Kennedy delivered a rousing speech in Miami Beach that awakened echoes of his campaign last year and brought repeated cheers from an audience of 3,000 persons. Mr. Kennedy gave the Young Democrats a broad hint that he would be campaigning in 1964, th

Dec. 7, 1961 - Additional security measures were taken to protect President Kennedy on his two-day visit to New York this week because of a reported threat by a pro-Castro Cuban to shoot the President. According to NYPD sources, a man who spoke English with a Spanish accent telephoned a Federal agency and reported that he had overheard a supporter of Premier Fidel Castro say he intended to shoot President Kennedy. The caller, it was reported, gave the name of the man, which w

Dec. 7, 1961 - The unemployment rate dropped sharply last month in the first significant decline in a year, the Kennedy Administration reported today. A spokesman said the improvement was expected to continue. Reflecting both good weather and the economic recovery from last winter’s recession, the seasonally adjusted rate fell from 6.8 percent to 6.1 between October and November. The rate had hovered around 7 percent for 11 months. The decline was the sharpest in three years.

Dec. 7, 1961 - President Kennedy asked organized labor today to back his proposals to liberalize foreign trade. He said that his program would mean a “viable economy and full employment.” Four thousand persons, who jammed into the auditorium of the Americana Hotel in Bal Harbour, Fla., for the opening of the convention of the AFL-CIO, greeted his appeal with warm applause. Their response was even heartier when the President told them that he planned to seek from the next sess

Dec. 6, 1961 - President Kennedy appealed to industry today to support “new and bold” powers for him to bargain on tariff reductions with Western Europe in broad categories, instead of item by item. He depicted his program as a means of providing prosperity for all Americans by increased international trade and a way of strengthening the non-Communist world against “the long-range Communist aim of dividing and encircling us all.” Twenty-three hundred industrialists heard the

Dec. 6, 1961 - President Kennedy called last night for broader American participation in sports and other forms of physical activity. “We are under-exercised as a nation,” he said. “We look instead of play, ride instead of walk.” “The remedy, in my judgment, lies in one direction,” he added. “That is in developing programs for broad participation in exercise by all of our young men and women, all of our boys and girls.” The President’s remarks were made after he had accepted

Dec. 4, 1961 - Mrs. Jacqueline Kennedy ordered 10 boxes of UNICEF greeting cards today as a symbol of her support of the work of the U.N. Children’s Fund. The proceeds help to support the relief work of the children’s fund. A personal secretary to Mrs. Kennedy described the order as a response to a recent denunciation of the cards by the National Defense Committee of the Daughters of the American Revolution. Members of the D.A.R. have been urged not to buy UNICEF cards. The o

A Lodge May Face a Kennedy Again in Mass. Senate Election

Nov. 30, 1961 - George Cabot Lodge (right) of Beverly, Mass., formally announced today his candidacy for the Republican nomination for United States Senator in 1962. Mr. Lodge, 34, is a son of Henry Cabot Lodge, Republican nominee for Vice President in 1960. The long-expected declaration made Mr. Lodge the first official entry in the contest to fill the seat occupied by President Kennedy when he was elected to his present office in 1960. Mr. Kennedy won the seat from Mr. Lodg

Nov. 29, 1961 - Attorney General Robert F. Kennedy said today that the F.B.I. would make a complete investigation of today’s outbreak of violence at McComb, Miss. His statement follows: “The outbreak of violence in McComb obviously is a matter of deep concern. The F.B.I. has been asked to make a complete investigation of all aspects of the incident. The matter will be vigorously pursued. Officials of the Department of Justice have just talked with Mayor C.H. Douglas of McComb

McCone Sworn In as C.I.A. Director

Nov. 29, 1961 - President Kennedy looked on today as John A. McCone (left), Los Angeles industrialist, was sworn in as director of the C.I.A. at a White House ceremony. “We want to welcome you here and to say that you are now living in the bull’s eye, and I welcome you to that spot,” Mr. Kennedy told Mr. McCone. Members of the Cabinet and Allen W. Dulles, Mr. McCone’s predecessor as C.I.A. director, attended. Justice Earl Warren administered the oath. Mr. McCone told the audi

President Kennedy Responds to Female Reporter on Discrimination Against Women

Nov. 29, 1961 - A woman reporter’s assault on male exclusiveness at the National Press Club won sympathy from President Kennedy today. Women are barred from all areas of the club except a special dining room. When public figures come to speak, women reporters are not allowed on the floor of the ballroom with their men colleagues. At his news conference, the President was asked why he and his Cabinet do not stay away from affairs where women reporters were barred, as they do f

Nov. 28, 1961 - President Kennedy made a surprise helicopter trip today to C.I.A. headquarters at Langley, Va., to present a National Security Medal to the agency’s outgoing director, Allen W. Dulles. Around 700 C.I.A. employees saw the presentation. The President was accompanied on the trip by Secretary of Defense Robert S. McNamara and Gen. Maxwell D. Taylor, his special military advisor. Mr. Dulles will be succeeded in the C.I.A. post by John A. McCone, former chairman of
1
2
345