Mar. 9, 1962 - U.S. officials said today that American pilots were engaged in combat missions with South Vietnamese pilots in training them to fight Communist guerrillas. No clarification was made by the State Department as to whether this conformed with U.S. policy as enunciated by President Kennedy — that Americans in Vietnam are assigned for training, not combat, but are under orders to fire back if shot at. Officials emphasized that the American pilots were always accompa

President Sees First Lady Off Before Her World Trip

Mar. 8, 1962 - Mrs. Jacqueline Kennedy flew to New York today on the first lap of her goodwill trip to India and Pakistan. The President escorted his smiling 32-year-old wife aboard the Kennedys’ plane Caroline and then stood by his limousine as the door of the plane closed. It took off from National Airport at 12:58 p.m. The First Lady wore a leopard coat and a small black pillbox hat. Mrs. Kennedy will remain overnight in New York and will depart for Rome at 7:30 p.m. tomor

Mar. 8, 1962 - United States Army helicopters carried a Vietnamese battalion in a successful raid against the Communist stronghold of Cai Ngai near the southern tip of Vietnam. Five helicopters were struck by Communist bullets, and one was disabled. There were no American casualties. Cai Ngai, a clutter of huts along a canal 20 miles southwest of Ca Mau in An Xuyen Province, fell easily after a brief fight. Three Communist guerrillas were killed in a bamboo thicket at the edg

Mar. 7, 1962 - Extremists, both Right and Left, “are the same pigeons and eventually join feathers,” Senator Hubert H. Humphrey (left) told a cheering rally of young liberal Democrats in New York tonight. The rally was organized during the last few days to counter one held at Madison Square Garden by the conservative Young Americans for Freedom. The liberals met in the St. Nicholas Arena, Broadway and 66th St. Senator Humphrey, one of nine speakers who kept the youngsters app

Mar. 7, 1962 - Nearly 18,000 conservatives staged a spectacular rally in Madison Square Garden tonight. They acclaimed Senator Barry Goldwater of Arizona as a Republican Presidential possibility for 1964 and hissed and booed at the name of President Kennedy. The conservative outpouring had been arranged by the 18-month-old Young Americans for Freedom. The gathering was a festive occasion, and its sponsors were proud of having filled the Garden. Behind the speakers was a huge

Mar. 7, 1962 - Following are the main points of the President’s news conference today: Steel Negotiations — Mr. Kennedy asked for a resumption of collective bargaining by March 14 and emphasized again that the public interest required an early and non-inflationary settlement. Trade — He announced what he described as a favorable accord on tariffs and trade with the European Common Market, the United Kingdom, and 24 other countries, and called again for passage of broader tari

Mar. 7, 1962 - At his press conference today, the President’s attention was called to the apparently different conditions set by himself and Mr. Macmillan for meeting Mr. Khrushchev in Geneva. Mr. Macmillan has said he would go if there was progress or if certain clear points of disagreements developed. The President has said he would go to register progress at lower levels. When it was remarked today that there were written reports that “you are going to eat those words and

Mar. 7, 1962 - Five battalions of South Vietnamese troops launched a major drive today against a Communist stronghold in the Mekong Delta where a company of Government rangers was wiped out in a Viet Cong Communist ambush Thursday. An informed source said government troops had made contact with the enemy on the bank of the river a short distance from the South China Sea and that a battle was underway. The government force was said to total about 1,500 men. During the last 12

Mar. 7, 1962 - President Kennedy joined the list of those asking the services of The Advertising Council today. The council is a public service organization of businesses, advertising agencies, newspapers and magazines, and radio and television stations — all the elements of the advertising business — which exists to promote national causes. The President, in a speech to the council’s annual meeting in Washington, said: “I hope this year you will devote yourself especially as

Mar. 6, 1962 - The movie industry and President Kennedy paid tribute to Bob Hope last night for his tireless trips to entertain American servicemen. The comedian was presented with the Milestone Award at the Screen Producers Guild annual dinner in Hollywood. Mr. Hope received telephone messages from servicemen in Berlin, Korea, Greenland, Alaska, and other places where he has entertained. The biggest surprise was the tape-recorded voice of President Kennedy, who cited Mr. Hop

Mar. 6, 1962 - Admiral Harry D. Felt, commander in chief of U.S. forces in the Pacific, said in Saigon today that South Vietnamese forces (pictured) had “gone on the offensive” against the Communist Viet Cong. Admiral Felt belittled expressed fears that the Chinese Communists would react violently to the American buildup in South Vietnam. “They are not 50 feet tall,” he said. “We are taller than they are, and they have reason to be cautious.” When a reporter observed that Gov

U-2 Pilot Powers Vindicated in Senate

Mar. 6, 1962 - Senators joined the C.I.A. today in an extraordinary gesture to vindicate the honor of Francis Gary Powers. The U-2 flier, whose capture and trial in the Soviet Union created an international furor in 1960, was absolved by the C.I.A. of any suspicion of dereliction. He appeared before the Senate Armed Services Committee for public testimony. For a man who, 20 months ago, was criticized in Congress and in the country for not killing himself, it was a hero’s rede

Mar. 6, 1962 - Mrs. Jacqueline Kennedy was reported today to be responding to treatment for the low-grade sinus infection that caused a postponement of her trip to India and Pakistan. She was examined in Washington by Dr. G.W. Taylor, a nose and throat specialist at the Bethesda Naval Hospital who has been treating her since mid-February. “He finds she has responded to treatment, antibiotics, and has had no fever since she started taking the medication,” Mrs. Kennedy’s press

Mar. 5, 1962 - Enrique Lister (pictured left with Ernesto “Che” Guevara), who led a Communist corps in the Spanish civil war and served as a Soviet general in World War II, is reported to be in a high military command position in Cuba. General Lister, who is 54 years old, is in charge of rocket artillery units of the Cuban armed forces and is a top advisor on strategy and the use of Soviet and Czechoslovakian equipment supplied to the regime of Premier Fidel Castro since 1960

Mar. 5, 1962 - Attorney General Robert F. Kennedy said facetiously last night that any future comments he might make about Texas would be cleared with Vice President Johnson, on orders of President Kennedy. In answering a question in Jakarta, the Attorney General indicated that he did not think the war with Mexico was a very bright page in the history of the U.S. This touched off an uproar, especially in Texas. The President’s brother was asked last night on “Update,” an NBC-

Mar. 4, 1962 - President and Mrs. Kennedy attended noon mass today at the Middleburg Community Center in Virginia. They are spending the weekend at nearby Glen Ora, their leased estate. A crowd of spectators turned out in sunny but cool weather to watch their arrival and departure. They heard a sermon urging Roman Catholics to greater love of God and love of neighbor, in which the Rev. Albert F. Pereira said, however, that mounting tensions had made necessary “further nuclear

Mar. 3, 1962 - Former President Harry S. Truman said today that President Kennedy was “on the right track” in his decision to resume atmospheric nuclear tests if the Soviet Union failed to agree to an ironclad test ban. “It was the proper thing to do,” Mr. Truman said. “We should never have stopped it.” Former President Herbert Hoover said much the same today, declaring that Mr. Kennedy was “right in resuming nuclear testing.” Mr. Hoover, on a fishing trip in the Florida Keys 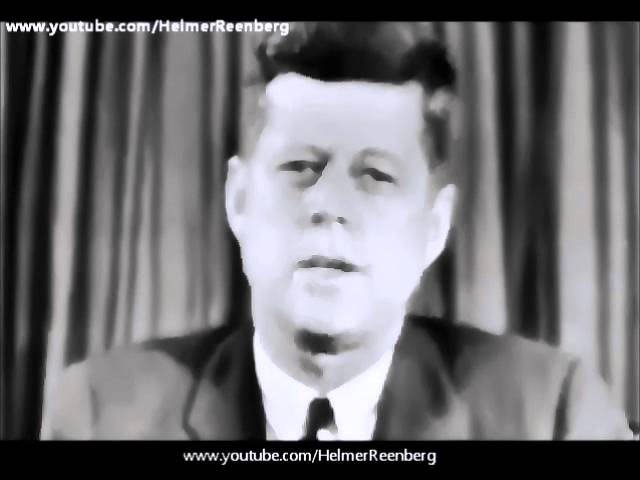 Mar. 2, 1962 - President Kennedy said tonight he had ordered a resumption of nuclear tests in the atmosphere in late April unless the Soviet Union agreed in the interim to an iron-clad treaty banning all tests. Speaking on a nationwide television broadcast from the White House, the President held out to Premier Khrushchev the promise of a summit conference at which such a treaty could be signed. To head off a new series of tests by the U.S., Mr. Kennedy said, the Soviet Union

A Minor Victory for South Vietnamese Troops and Their U.S. Advisors