May 8, 1962 - President Kennedy (pictured with Walter Reuther) called on labor today to exercise restraint and responsibility in its bargaining demands. In a speech before the convention of the United Automobile Workers, the President made it clear that he expected labor as well as management to consider the general welfare and the public interest. He said that “no financial sleight of hand” could raise wages and profits faster than productivity without the threat of inflatio 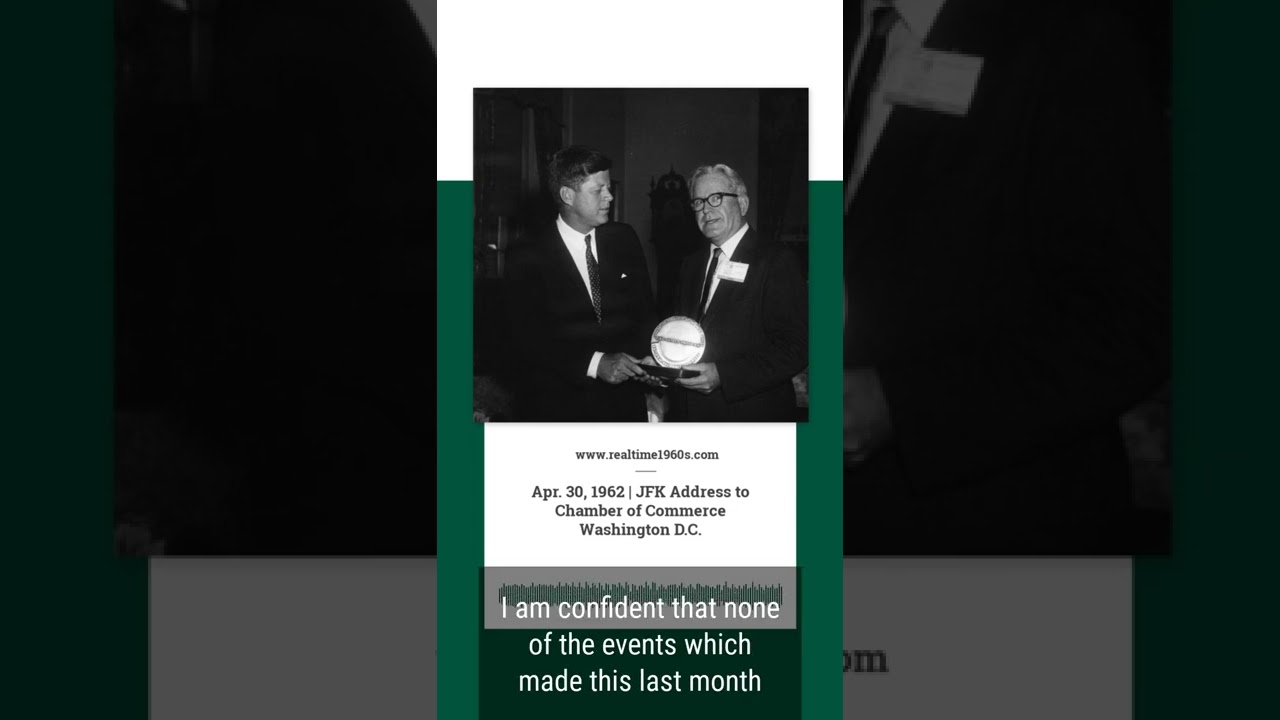 Apr. 30, 1962 - In remarks today to the U.S. Chamber of Commerce, President Kennedy made an effort to smooth some of the bitterness aroused by his action to reverse the steel price increase earlier this month. #JFK #economy #economics #1960s

Apr. 18, 1962 - President Kennedy said today that the recent dispute with the steel industry over prices had left no residue of ill will in his Administration against American business. He declared at his news conference that the prosperity of corporations was as essential to his goals as it was to theirs. Of steel in particular, the President said that the industry’s problem was idle capacity, which economic growth rather than a price increase would cure. Using 90% of capaci

Apr. 14, 1962 - Steel’s surrender to President Kennedy appeared today to have bolstered the Administration’s stock in and out of Congress. Ranking Democrats on Capitol Hill predicted that Mr. Kennedy’s victory might soften bipartisan objections to his tax-revision bill in the Senate. Even the chairman of the Republican National Committee, Representative William E. Miller of New York, conceded that “President Kennedy has gained politically over the short run.” This morning, Wh

Apr. 13, 1962 - For three days, the great forces at the command of the President of the United States were brought to bear on the steel industry. Some of the effort to get the steel industry to rescind its price rise was exerted in the open — the President’s denunciation of the companies at his press conference, calculated to arouse public opinion against them; the opening of grand jury proceedings leading to possible anti-trust action; and the threat to divert orders to comp

Apr. 13, 1962 - President Kennedy triumphed today over the titans of the steel industry. Seventy-two hours after the U.S. Steel Corporation’s abrupt announcement of a price increase, the corporation backed down and rescinded the increase late this afternoon. The action by U.S. Steel, the nation’s largest steel producer, followed announcements by the Inland Steel Company and the Kaiser Steel Corporation that they would not increase their prices, and a statement by Bethlehem St

Apr. 12, 1962 - Attorney General Robert F. Kennedy announced tonight he had ordered a grand jury investigation of the price increases announced by leading steel companies. Evidence will be presented to one of the grand juries now sitting in New York. This move under the Sherman Antitrust Act was one of several decisions that apparently came out of an all-day series of intensive conferences at the White House. Tomorrow, Secretary of Defense Robert S. McNamara is expected to is

Apr. 12, 1962 - Roger M. Blough (pictured), board chairman of the U.S. Steel Corporation, defended his company’s new price increase today as a move to strengthen the nation’s industrial assets. He also asserted the right of an individual company to make its own pricing decisions. Mr. Blough said that the three-and-a-half percent increase initiated by U.S. Steel yesterday had had no “political motivation.” The executive’s comments were made in a prepared statement and in answe

Apr. 11, 1962 - President Kennedy accused the major steel corporations today of “irresponsible defiance” of the public interest and “ruthless disregard” of their duty to the nation in raising steel prices by $6 a ton. After arriving at his news conference, the President strode quickly to the lectern and in a tone of cold anger read a long indictment of the steel companies’ action. At a time of grave crisis in Berlin and Southeast Asia, the President began, when reservists wer

Apr. 10, 1962 - The United States Steel Corporation announced this evening price increases averaging $6 a ton, effective at midnight. The other members of the “Big 11” steel companies were expected to announce increases soon. U.S. Steel said the increase would affect all its principal products. President Kennedy was reportedly infuriated by the news. The President has deliberately leashed some of his liberal instincts in an attempt to create good working relations with busine

Jan. 29, 1962 - Senator Barry Goldwater, Republican of Arizona, listed four possible ways today for the U.S. to meet increasing economic competition from overseas. He said the steps were an alternative to President Kennedy’s proposal for closer ties with the European Common Market. Speaking to 1,000 delegates at the National Cotton Council’s convention in New Orleans, Mr. Goldwater suggested: “fiscal responsibility,” in the form of a balanced budget for four or five years; a

Dec. 7, 1961 - The unemployment rate dropped sharply last month in the first significant decline in a year, the Kennedy Administration reported today. A spokesman said the improvement was expected to continue. Reflecting both good weather and the economic recovery from last winter’s recession, the seasonally adjusted rate fell from 6.8 percent to 6.1 between October and November. The rate had hovered around 7 percent for 11 months. The decline was the sharpest in three years.

Dec. 7, 1961 - President Kennedy asked organized labor today to back his proposals to liberalize foreign trade. He said that his program would mean a “viable economy and full employment.” Four thousand persons, who jammed into the auditorium of the Americana Hotel in Bal Harbour, Fla., for the opening of the convention of the AFL-CIO, greeted his appeal with warm applause. Their response was even heartier when the President told them that he planned to seek from the next sess

Dec. 6, 1961 - President Kennedy appealed to industry today to support “new and bold” powers for him to bargain on tariff reductions with Western Europe in broad categories, instead of item by item. He depicted his program as a means of providing prosperity for all Americans by increased international trade and a way of strengthening the non-Communist world against “the long-range Communist aim of dividing and encircling us all.” Twenty-three hundred industrialists heard the