Most Americans See No Protection Against Nuclear 'Super-Bomb'

Sept. 2, 1961 - If the respondents to a New York Times survey are typical, Americans feel that protection against a Russian super-bomb at this time is virtually hopeless. Some of those interviewed felt that instant death was preferable to survival in a world of horror. Leo Bienvenu, an engineer in Westport, Conn., said: "I think building a bomb shelter is useless. I'd rather see my wife and two children killed outright than starve to death because every living thing would be

Sept. 2, 1961 - Harry S. Truman said today that he did not believe that the Soviet Union's resumption of nuclear weapons tests would lead to war. "The Russians are the greatest bluffers in the world," the 77-year-old former President said. "When you call their bluff, they back down. At least, that's been my experience." On the question of whether the U.S. should also resume testing, he said the decision rested with President Kennedy. #communism #communist #coldwar #soviet #so

Sept. 1, 1961 - William Z. Foster, former head of the Communist party of the United States and three-time candidate for the U.S. Presidency, died in Moscow today in a sanatorium at the age of 80. Mr. Foster had been suffering for years from a heart ailment that had prevented his trial on charges of conspiracy to overthrow the U.S. Government by force and violence. He had come to the Soviet Union early this year for medical treatment and was visited on his 80th birthday, Feb.

Sept. 1, 1961 - The White House announced today that the Soviet Union resumed the testing of nuclear weapons early this morning by exploding a device over Soviet Central Asia. The explosion took place "in the atmosphere" at Semipalatinsk, 350 miles south of Novosibirsk. It was apparently the first nuclear test by the Soviet Union since its announcement Wednesday that it would resume testing. Although there was no precise estimate of the size of the nuclear device, the White H

Aug. 31, 1961 - The White House declared tonight that the Soviet Union's announcement that it would resume tests of nuclear weapons was "a form of atomic blackmail, designed to substitute terror for reason." A statement by President Kennedy said that he is "entirely confident that the size of the U.S. nuclear weapons stockpile and the capabilities of the individual weapons and delivery systems are wholly adequate for the defense of the U.S. and the free world." The statement

Aug. 31, 1961 - Communist China issued a statement today expressing support for the Soviet Union's decision to resume nuclear tests. The statement said that Communist China regarded the Soviet decision as a "cooling dose for hot-headed war plotters but a powerful inspiration to all peoples striving for world peace." The statement, broadcast by Beijing radio, charged that the Western powers, "especially U.S. imperialism and West German militarism," were "fanning up war hysteri

Aug. 31, 1961 - The U.S. declared itself freed today from its promise not to conduct nuclear tests, but it withheld any decision on the resumption of testing. The White House said the Soviet decision to resume testing would cause the "deepest concern and resentment" throughout the world. It accused Moscow of creating a hazard to every human being by increasing the dangers of nuclear fallout, disregarding mankind's desire for a halt in the arms race, and increasing the dangers

🚨Soviets to Resume Nuclear Tests, Claim to Have "Super-Bomb"

Aug. 31, 1961 - The Soviet Union announced today it would resume testing of nuclear weapons. The Government statement said that Soviet scientists are now able to create a series of super-powerful nuclear bombs with an explosive force equivalent to 100 million tons of TNT. Moscow asserted it had been compelled to undertake these plans because of the "threatening attitude" of the U.S. and its allies in the Berlin dispute. It warned that the Soviet Union possessed rockets capabl

Aug. 30, 1961 - President Kennedy said today that Gen. Lucius D. Clay would return to West Berlin next month as his personal representative. The President described the situation in Berlin as "fraught with danger” and promised to use all means to find a peaceful settlement, but he said he had no indication from Moscow that made him optimistic about the prospects. Gen. Clay, retired, who was military governor of Germany when an Allied airlift broke the Communist blockade of Be

Aug. 28, 1961 - Cuban Premier Fidel Castro today urged Brazil to set up a guerrilla war against what he termed "reactionary militarists" who forced the resignation of Brazilian President Janio Quadros three days ago. Castro, in a television address, said that "if workers, peasants, students, and progressive people and honest military men take up arms and organize not one front but a thousand fronts, never will the military reactionaries be able to defeat them." Castro said th

Aug. 26, 1961 - Eight British soldiers in a jeep and a small armored scout car escort 12-year-old Erwin Schabe (pictured right) to school these days past the Communist police. Erwin lives in an enclave on the northwest edge of Berlin that called "Eiskeller" (Ice Cellar), which is surrounded by Communist barbed wire and observation posts. Eiskeller juts into East Germany. A corridor only eight feet wide connects Eiskeller with the British sector of West Berlin. East German pol

Aug. 26, 1961 - British Prime Minister Harold Macmillan (right) said today that the situation in Berlin was "very worrying, but nothing more." "Nobody is going to fight about it," he declared. "I think there would be much more danger of war if weapons were not so destructive. Fifty years ago, we could have had a war. Now it is not much fun for anybody. But we have to be very careful that nobody does anything foolish." #greatbritain #british #britishpm #communism #communist #c

Aug. 24, 1961 - The East German Communists are cracking down on their foes in what was described by West Berlin authorities today as a "widespread campaign of intimidation and oppression." Accounts of arrests, trials, public indictments and other repressive measures filled the pages of many of the East German newspapers that still reach West Berlin. In at least 20 cases, East German men and women were arrested and sentenced to prison for publicly criticizing Walter Ulbricht,

Aug. 24, 1961 - The White House gave the Soviet Government a "solemn warning" today that any Communist interference with Allied access to West Berlin would be "an aggressive act" for which the Soviet Government would bear full responsibility. In a stern statement approved by President Kennedy, the U.S. dismissed as false, cynical, irresponsible, and slanderous an accusation by Moscow that the Western Allies were violating their air access rights to West Berlin by flying spies

Aug. 23, 1961 - The Western powers deployed 1,000 troops of their West Berlin garrison, backed by 10 40-ton U.S. tanks, along the border with East Berlin today. This was the swift Allied answer to the attempt by East German Communists to establish remote control over a 110-yard zone all along the West Berlin side of the 25-mile border. The Communists have warned all persons to stay at least 110 yards away from both sides of the intracity border. Two of the American tanks were 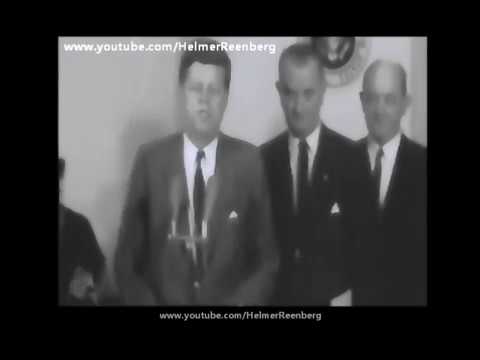 Aug. 21, 1961 - President Kennedy said today that "difficult weeks and months" lay ahead in maintaining the freedom of West Berlin. But, he said, "maintain it we will." The President spoke briefly of the Berlin crisis as he stood with Vice President Johnson in a reception room of the White House. He had received a report on the Vice President's weekend mission to Germany, undertaken as a symbol of the United States' determination to oppose Communist pressures on West Berlin.

Aug. 20, 1961 - The South Vietnamese Army, equipped and trained by the U.S. in new jungle warfare tactics, is reported to have assumed the initiative in the seven-year-old struggle with Communist guerrillas. Kennedy Administration officials said today that since May, when the reorganization of the army began, the pro-Western Vietnamese forces had "started 75 percent of the fights" and had won 4 important victories, including a key engagement this week in the Plaine des Joncs.

Aug. 20, 1961 - Fifteen hundred additional U.S. troops arrived in West Berlin today. The grateful city poured out its heart to them and to Vice President Johnson. The troops and the Vice President were there for the same purpose: to bolster the morale of the West Berliners, whose spirit was badly shaken by the closing of the border between West Berlin and Communist East Berlin a week ago. Mr. Johnson greeted the soldiers as an example of Washington's intention to fulfill its
12
3
45