May 29, 1962 - At 10:55 last night, Stefan Redl’s left hook cut through cigar smoke, Tony Fortunato ducked, a man yelled, “Mark him up — break his nose,” a bell rang three times, and St. Nicholas Arena ended its 56th and final year as one of New York’s great boxing centers. Since 1906, it has graduated more than 15,000 professional men, many of whom went on to win glory, world championships, convex ears, and considerable fortunes for their managers. A few landed in shoeshine

May 28, 1962 - Archie Moore was the aggressor throughout his 10-round fight with Willie Pastrano tonight, but had to settle for a draw before a crowd of about 3,000 in the Los Angeles Sports Arena. Moore had been heavily favored. The decision stunned Moore, who was confident he had scored a decisive victory. Referee Tommy Hart, who had favored Moore, 5-4, also seemed surprised that the other two judges scored it even. “Archie won the fight,” he said. “Pastrano was doing all t

Patterson To Defend Title Against Liston

May 23, 1962 - Heavyweight champion Floyd Patterson said today he would defend his title against Sonny Liston in Chicago sometime in September. Patterson also revealed that officers of Championship Sports Inc. were in Chicago conferring with Mayor Richard J. Daley and others for rental of an arena. Two sites were mentioned — Comiskey Park, home of the Chicago White Sox, and Soldier Field, the stadium where, in 1927, Gene Tunney and Jack Dempsey fought for the second time. Pat

May 22, 1962 - In the wake of the death of welterweight boxer Benny Paret, who perished 10 days after he was knocked out by Emile Griffith in a title bout at Madison Square Garden on March 24, a bipartisan committee of 7 New York state legislators is conducting hearings as part of an investigation into boxing. Griffith, testifying under oath before the committee today, said that at no time during the 12th round did he realize that his opponent was helpless. “I just kept punch 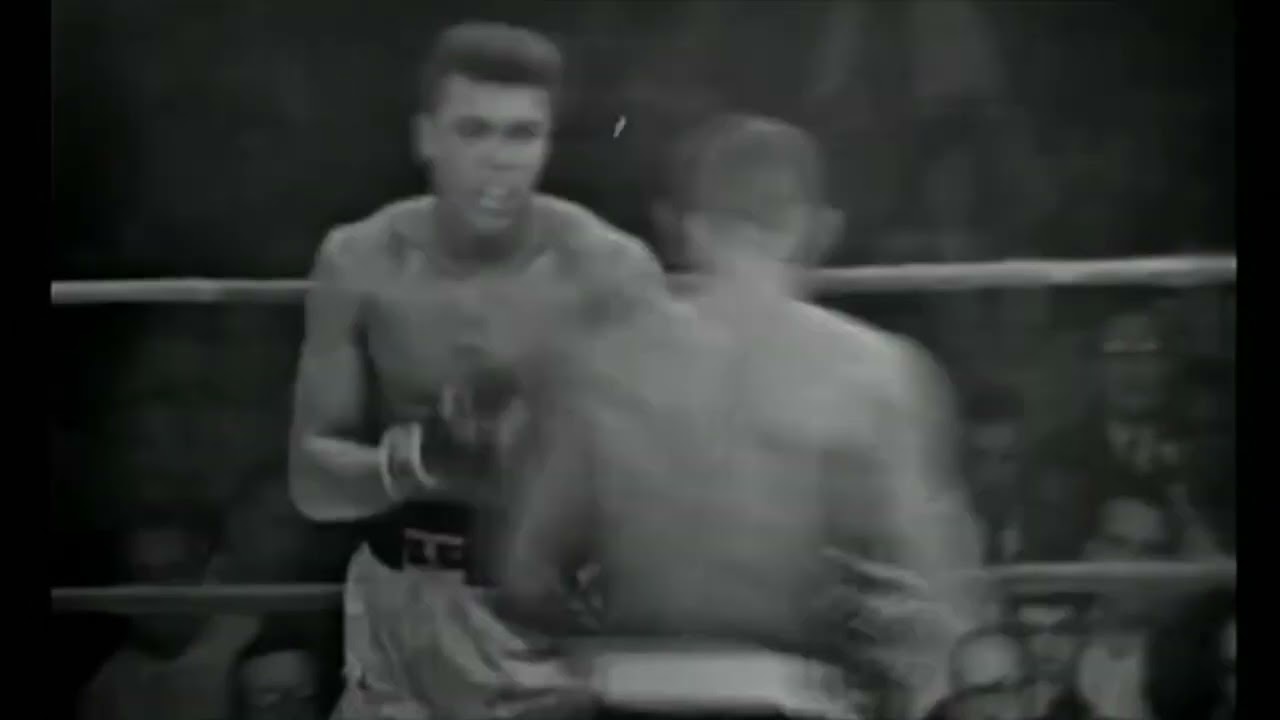 May 19, 1962 - Cassius Clay, whose ebullient personality and knockout predictions have brought a refreshing breeze to boxing, scored a technical knockout tonight over Billy Daniels at 2:21 of the seventh round of their scheduled 10-round heavyweight bout at St. Nicholas Arena. #muhammadali #boxing #boxingnews #boxinghistory #boxingtraining

May 19, 1962 - Cassius Clay, whose ebullient personality and knockout predictions have brought a refreshing breeze to boxing, scored a technical knockout tonight over Billy Daniels at 2:21 of the seventh round of their scheduled 10-round heavyweight bout at St. Nicholas Arena. Before the fight, he said he would leave the country “by jet” if he did not stop Daniels in “five or maybe seven.” Clay had said such things before, but always had thwarted travel agents looking for his

Cassius Clay Predicts Billy Daniels Will Drop in Fifth Round

May 16, 1962 - Heavyweight Cassius Clay’s oratorical tendencies came to life again today as he described himself as “the forthcoming youngest heavyweight champion in boxing history.” On Saturday night, Cassius has a 10-round bout in St. Nicholas Arena with Billy Daniels, 24, a New York fighter undefeated in 16 fights, with 7 knockouts. Cassius has won 13 of his 13 starts, with 10 knockouts. The bout will be the last fight of any significance to be held at St. Nick’s. The coun

May 12, 1962 - Something’s got to give Saturday night when two irresistible fighting forces meet at the St. Nicholas Arena in a 10-round heavyweight bout. Cassius Clay, the self-proclaimed future heavyweight champion of the world and winner of all 13 of his professional bouts, will meet Billy Daniels, an equally undefeated and equally confident fighter. Clay, who is from Louisville, won the light-heavyweight championship at the 1960 Olympic Games in Rome. Since turning pro in

Liston: "I Just Want To Prove Myself"

May 2, 1962 - Sonny Liston said today that he was not upset by the New York Athletic Commission’s refusal to give him a license to challenge Floyd Patterson for the heavyweight crown in New York in September. The commission, citing Liston’s criminal record and his association with persons of unsavory background, said these factors could be detrimental to the best interests of boxing. “I only want a chance to prove myself,” said Liston. “I don’t think anyone should worry about

Robinson Hangs On for Split Decision over Greaves

Sept. 26, 1961 - Sugar Ray Robinson, floored by a left hook to the midsection near the end of the eighth round, hung on last night for a split decision over the Canadian middleweight champion, Wilf Greaves. Robinson, the 41-year-old former champion who is trying to start another comeback, looked sharp only in the middle rounds. In the eighth, Robinson unleashed a flurry of right uppercuts, left jabs, and right crosses. He outboxed and outpunched the slower, awkward Greaves wi

Sept. 16, 1961 - Emile Griffith, who defends his welterweight title against Benny (Kid) Paret at Madison Square Garden Sept. 30, is running out of sparring partners, and the fault is his. The 22-year-old Virgin Island fighter has become unpopular with spar-mates because of his vicious handling of them since he began training three weeks ago for the second defense of his title. Two of them, Walter Daniels and Frank Sallee, have walked out on him, vowing never to return. Daniel

Aug. 30, 1961 - Harold Johnson (left), the National Boxing Association's light-heavyweight champion, gained a split decision over Eddie Cotton last night and collected $20,000 for the job - the biggest take-home pay he's had in 14 years of fighting. It was a close battle. The ring announcer gave one judge's score as 147-145 for Johnson. Then he announced the other judge's score which was 148-144 for Cotton. "There goes my crown," Johnson said to his manager, Pat Olivieri. But

Aug. 17, 1961 - Irish Bob Murphy (pictured right with Danny Nardico in 1951), once a contender for the light heavyweight championship, was killed in an automobile accident in Boston today. The police said that Mr. Murphy's car had gone out of control and collided with a two-ton truck. He was 43 years old. The former fighter was born Edward Lee Conarty in Denver. He began fighting under the name Irish Bob Murphy and later changed his name legally to Robert M. Murphy. On Aug. 2

Aug. 16, 1961 - Harry William Balogh (pictured with Joe Louis in 1938), the boxing announcer, died today in New York's Beth Israel Hospital. He was 70 years old. Mr. Balogh was for a quarter century the unquestioned master of his craft who soared to dizzying heights of rhetorical fancy. It was he who adopted the tuxedo and stiff-front shirt as the boxing announcer's uniform. Mr. Balogh conducted a one-man campaign from the center of the prize ring against racial prejudice. He

Aug. 5, 1961 - Gene Fullmer took a terrific battering in the closing rounds, but had enough of an early lead to win a 15-round split decision over Florentino Fernandez at Utah's Municipal Stadium today. Fullmer retained the National Boxing Association middleweight title. Fernandez, a 9-5 short-ender staggered him in the 14th round with a right-left combination to the head. Then the converted southpaw from Havana switched to his old southpaw stance and blasted Fullmer with lef

Aug. 2, 1961 - Charles (Sonny) Liston was released on $500 bail today on a charge resulting from an incident in Philadelphia's Fairmount Park last June 12. The 26-year-old boxer, regarded as the strongest contender for Floyd Patterson's heavyweight title, had been arrested after a police chase in which one shot was fired. Liston and Isaac Cooper, also 26, were accused of forcing a woman motorist to the side of a road in the park. They then told the woman they were policemen.

July 23, 1961 - Cassius Clay, a relative newcomer to the professional boxing ranks, won a unanimous 10-round decision from Alonzo Johnson last night in Louisville's Freedom Hall before 6,000 fans. Clay, indifferent in the early rounds, went to work in the ninth and tenth and had his Pittsburgh opponent hanging on at the finish. The victory ran Clay's record to 8-0. During the first three rounds, Johnson, 26, carried the fight to his younger opponent and punched with both hand

July 21, 1961 - Cassius Clay, who figures he has to win every fight to reach his goal of heavyweight champion in two years, will meet his toughest opponent to date in a 10-rounder against Alonzo Johnson tomorrow night. Clay, a 19-year-old Olympic champion who left the amateur ranks less than a year ago, has won all seven of his fights as a pro, five by knockouts. Johnson, 26, who has a record of 19-7, came up with the usual pre-fight gimmick of a "secret weapon," holding some

Liston Barred from Boxing after Arrest

July 14, 1961 - Charles (Sonny) Liston, the top-ranking contender for the heavyweight boxing crown, was suspended indefinitely today by the Pennsylvania Athletic Commission. The 3-man commission announced that two recent arrests of the 28-year-old fighter were detrimental to boxing. Liston's suspension automatically applies throughout this country as well as Canada and some Latin American countries. Liston was arrested on May 17 for disorderly conduct and resisting arrest, a

July 11, 1961 - Terry Downes (right) won the world middleweight title from Paul Pender (left) by a technical knockout in London tonight when a bad cut over the left eye forced the defender to retire at the end of the ninth round. The finish came suddenly. Pender's seconds seemed to be preparing him for the 10th round when Al Lacey, his chief second, called over the referee and told him the champion could not continue. Downes, the 25-year-old Londoner and new champion, jumped
1
2