Aug. 1, 1962 - Bill Monbouquette (pictured left with catcher Jim Pagliaroni) of the Boston Red Sox pitched the fourth no-hitter of the major league season today by allowing only one walk in a 1-0 victory over the Chicago White Sox. Monbouquette, a husky right-hander who hadn’t pitched a complete game since June 29 and had failed to win since July 8, was overpowering. Only seven flies were hit to the outfield, five of them routine. The Red Sox scored their run in the eighth ag

July 31, 1962 - Bill Skowron hit a grand slam in the first inning today off Claude Osteen, the Washington Senators’ left-hander, and Osteen and his colleagues never recovered from the shock. The Yankees drove on to a 9-5 victory and a 6-game American League lead, the largest of the year in what once was a competitive race. Needless to say, Osteen departed early. In the third, he yielded a two-run homer to Elston Howard, then left. The game was won by Bill Stafford for his nin

July 31, 1962 - The National League today waived for Houston — and for next season only — a ban on Sunday night baseball. In lifting the ban against Sunday night baseball for one club only, the league heeded a request by General Manager Paul Richards of the Houston Colts, who said summer heat at Colt Stadium (pictured) in Houston was hard on players and fans, especially at day games. Commissioner Ford Frick previously had taken a strong stand against any Sunday morning or Sun

July 30, 1962 - Everything the National League did at Wrigley Field today, the American League did much better in scoring a 9-4 triumph in this season’s second and concluding All-Star game. Each side made 10 hits. But the Nationals committed four errors, and three American Leaguers belted homers good for six runs. These contrasting deeds made the difference. The Americans thus squared the 1962 All-Star ledger at one victory apiece. The Nationals took a 3-1 decision in Washing

July 30, 1962 - Burt Shotton Sr. (pictured with Pee Wee Reese in 1948), who managed the Brooklyn Dodgers in 1947 and 1949, died of a heart attack last night at his home in Lake Wales, Fla. He was 77 years old. Mr. Shotton, who led the Dodgers to National League pennants both years he managed them, disdained a uniform on the playing field. He wore a windbreaker with “Dodgers” across the front and a Brooklyn cap. Twice, Mr. Shotton was called upon by Branch Rickey, Dodgers’ gen 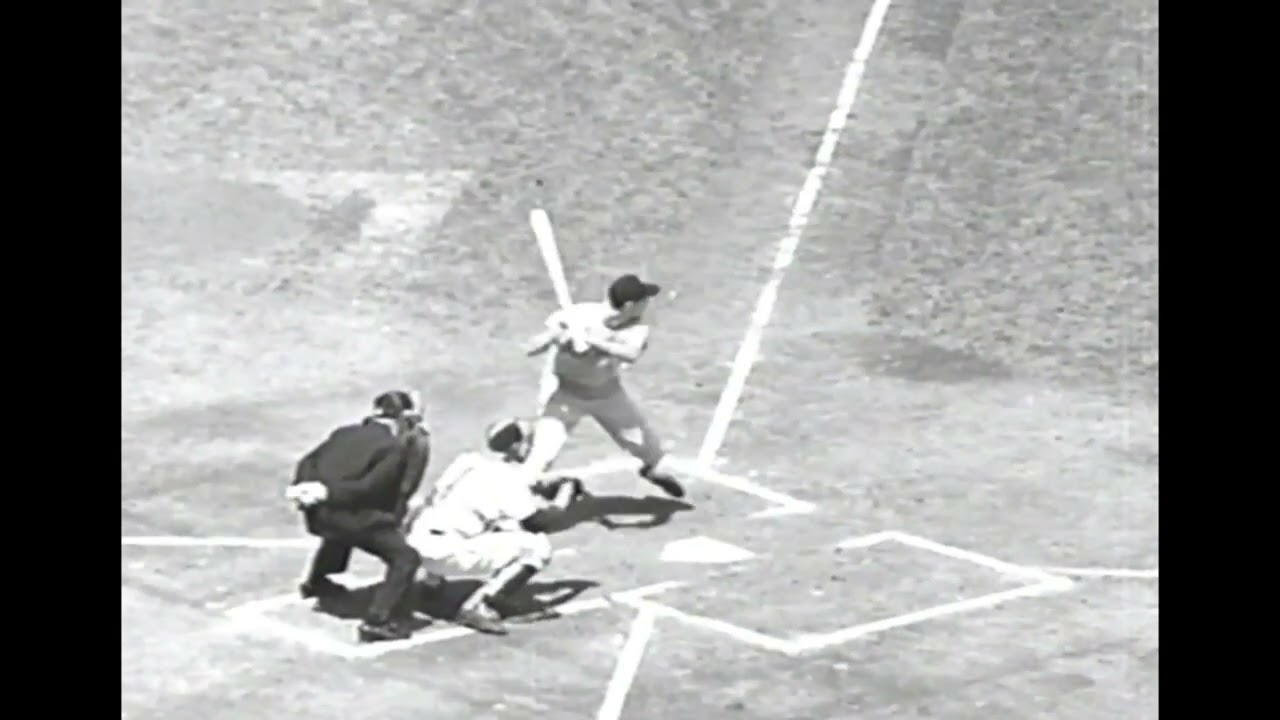 July 30, 1962 - Gene Conley (pictured), the wandering pitcher, was fined today an estimated $2,000 by the Boston Red Sox. At the same time, the suspended ball player was reinstated. Conley also will lose his pay for the four games he missed — in the vicinity of $600. Conley was missing from the time he stepped off a team bus in a New York traffic jam Thursday until yesterday, when a New York Post reporter spotted him at Idlewild International Airport trying to board a plane f

July 29, 1962 - Don Drysdale pitched the Dodgers to an 11-1 victory over the Giants today in Los Angeles for his 9th straight triumph and 19th of the season. The Dodgers increased their lead to four games. For the third straight game against the Giants, Frank Howard was the slugging star. The powerful outfielder drove in 5 runs on 4 hits including a lead-off homer in the seventh, his third of the series and 20th of the season. Last night, Howard sparked the Dodgers with a hom

Yanks Come From Behind to Beat White Sox, 4-3, on Blanchard’s Pinch-Hit Homer

July 28, 1962 - John Blanchard bashed a pinch-hit homer in the seventh inning with 2 men aboard today, helping the Yankees score a 4-3 victory over the White Sox in New York. A crowd of 52,038 was on hand. Prior to Blanchard’s heroics, Mickey Mantle had hit his 21st homer of the year, a solo shot into the right-field stand. The ovation Mickey received was nothing compared to the joyous celebration Blanchard touched off immediately afterward. Today’s victory raised the Yankees

July 28, 1962 - The Mets won their second game in a little over 24 hours today. Gene Woodling struck the critical blow, a pinch-hit, 2-run homer, as Casey Stengel’s men whipped the Cardinals in St. Louis, 9-8, before 17,179 irritated fans at Busch Stadium. It was a nice present for Stengel, whose 73rd birthday was celebrated after the game at a party conducted by the Mets’ front office. Actually, Casey’s birthday is Monday, but that is an open date for all but All-Star player

July 28, 1962 - Red Sox manager Mike Higgins slapped a heavy fine on his wandering infielder, Pumpsie Green (pictured right with Ted Williams in 1959), today while the Boston club tried to find another missing player, Gene Conley, a pitcher. Green and Conley both missed last night’s doubleheader with Washington. The Sox took a double trouncing, 11-2 and 14-1. The pair vanished Thursday after hopping off the team bus in a New York traffic jam. Green showed up in Washington las

July 27, 1962 - Frank Howard (pictured) slammed a 3-run homer and Johnny Podres pitched a 5-hitter today as the league-leading Dodgers defeated the Giants in Los Angeles, 3-1, before 54,095. The victory put the Dodgers two games ahead of the second-place Giants, who have lost their last seven games in Los Angeles. Howard hit his homer in the second inning off Juan Marichal after Tommy Davis and Ron Fairly had singled. It was a 430-foot line drive into the pavilion in right ce

July 26, 1962 - Warren Spahn, 41, continues to be amazing, even if his latest achievement was gained at the expense of the lowly Mets today. The left-hander pitched his 319th major league victory and 10th of the season as the Braves whipped the Mets, 6-1, before 14,773 fans at County Stadium. Spahn added a home run to the Milwaukee offense as he continued setting records. With 5 strikeouts today, he now has 2,274, taking over the seventh spot on the major league career list f

Mets Drop Their 10th Straight in Loss to Braves

July 25, 1962 - Joe Adcock and Eddie Mathews (pictured) crashed two home runs apiece in Milwaukee today, making it a simple chore for the Braves to hand the Mets their 10th straight loss. The score was 11-5. Mathews took the first big crack at Roger Craig’s offerings for a two-run homer into deep center in the first inning. Before the inning had ended, Adcock hit a homer just inside the left-field foul pole. In the fifth, Mathews slammed his 20th homer of the year with a man

July 25, 1962 - Stan Musial set a National League career record of 1,862 runs batted in with a 2-run homer today, but Don Drysdale gained his 18th victory of the season as the Dodgers beat the Cardinals, 5-2, in St. Louis. Musial had shared the RBI record with Mel Ott of the Giants. Musial’s blast, his 14th homer of the season, bounced off a light tower about 85 feet above the playing field. Drysdale, who has lost only four games, enabled the league-leading Dodgers to stay on

July 24, 1962 - Willie Mays hit two home runs and scored a third run after he was hit by a pitch as the San Francisco Giants scored a 3-1 victory over the Houston Colts today. The Giants moved within 1 game of the league-leading Los Angeles Dodgers, who lost to St. Louis, 3-2. Mays leads the majors in homers with 31. Dick Farrell served the homers to Mays in the first and fourth and hit the Giants centerfielder with a pitch in the sixth. He and Mays had words after the incide

July 24, 1962 - Whitey Ford, seeking to rehabilitate a club that had just dropped a doubleheader to the lowly Washington Senators, pitched an 8-hitter today as the Yankees defeated the Boston Red Sox, 5-3. Ford, using a snapping curve and a hard fastball, needed only two hours (and a little late relief from Marshall Bridges) to cure the Yankees’ ills. The victory was the tenth against five setbacks for Ford this season and his seventh triumph in his last eight decisions. #MLB

July 23, 1962 - Jim O’Toole had a perfect game for seven and one-third innings tonight as he pitched the Cincinnati Reds to a 1-hit, 3-0 victory over the Pittsburgh Pirates. No Pirate had reached base against the left-hander until Bob Skinner lined a double to right center with one out in the eighth. Bill Virdon, the only other Pirate to get on, drew O’Toole’s only walk in the ninth. The 25-year-old O’Toole had a 19-9 record last year and is 9-11 this season. He struck out si

July 23, 1962 - The league-leading Los Angeles Dodgers scored 3 runs in the second inning, added 5 in the fourth, and went on to defeat the St. Louis Cardinals, 9-2, today. Johnny Podres (lower right) scattered nine hits in picking up his sixth victory of the year. He has lost seven. Los Angeles also collected four hits off four pitchers. Frank Howard hit his 17th home run of the season in the second inning with a man on for the Dodgers. Maury Wills hit a three-run homer, his

July 23, 1962 - The first formal exchange of live television programs across the Atlantic took place today. The U.S. and Europe tried to outdo each other with panoramic views of landmarks and activities in their respective countries. During a 20-minute program relayed abroad by Telstar, the communications satellite, Europeans were afforded glimpses that included the Statue of Liberty, a major league baseball game in Chicago between the Cubs and the Phillies, President Kennedy
1
2
345