July 28, 1961 - President Kennedy joined his wife in Hyannis Port, Mass., today to help celebrate her 32nd birthday. Pierre Salinger, White House press secretary, said there would be no party. The schedule calls for the Kennedys to dine alone and for the cutting of a cake. Mrs. Kennedy has been spending the summer in Hyannis Port with her two children, Caroline, 3, and John, who was born last November. Mrs. Kennedy has none of her personal White House staff at Hyannis Port wi

July 28, 1961 - Senator Barry Goldwater, a spokesman for Republican conservatives, attacked the "censorship" he said the Kennedy Administration had placed on military leaders. In a speech at the Texas American Legion Convention, the Arizonan said: "It is now becoming popular in the national Government to investigate and censure military men who have any words of warning to say about Communist influences in American life. You men who have fought in wars must wonder what kind o

July 28, 1961 - The Senate approved overwhelmingly today President Kennedy's request for more weapons and troops to cope with Soviet pressure in Berlin and elsewhere. The House is expected to act Monday. There were no dissenting votes on the two principal measures - to buy nearly $1 billion worth of additional arms, ammunition and other equipment and to increase the armed forces to include a million-man Army. "In my opinion, the American people still have the will to fight an

July 27, 1961 - President Kennedy's immediate Civil Defense goal is to provide fallout shelters in existing buildings for 25 percent of the nation's population that live in major target areas. The shelters would be mainly in basements, interior corridors, and inside rooms in office buildings, factories, Government installations and schools. In addition, the Pentagon plans to provide "minimum essentials for survival" for the shelter-users: five days' austerity rations; two-wee

July 26, 1961 - President Kennedy's call for an increase in military manpower touched off a sharp increase in inquiries from the nation's service-age youth today on the prospects for the immediate future. Not only the men between the ages of 18-and-a-half and 26 who were subject to the draft, but also their parents, wives and sweethearts by the hundreds telephoned headquarters of the Selective Service System for New York seeking information. A spokesman there said hundreds of

July 26, 1961 - Bernard M. Baruch, financier and friend of Presidents, said today that the U.S. had "all the resources to do all the things that need to be done" in the Berlin crisis. "And there is no reason to get excited about it," he added. Mr. Baruch called on President Kennedy today, praised Mr. Kennedy's address to the nation on defense and voiced a hope that pressure groups would drop their goals and "get behind what the president wants to do." He said the U.S. had to

July 26, 1961 - The Kennedy Administration asked Congress today for $10 million to put into operation a home buzzer system that would give warning of impending nuclear attack. The system is called NEAR, for National Emergency Alarm Repeater. The NEAR system is designed to furnish each home, office and factory with direct warning of an attack. The buzzer is housed in a small black box that could be plugged into any 110-volt home electrical system. When the buzzer sounds, the h

July 26, 1961 - President Kennedy asked last night for an overall increase in the nation's military preparedness to meet a Soviet threat he described as "world-wide." The President proposed adding 217,000 men to the armed forces and increasing expenditures by $3,457,000,000, including $207 million for civil defense. The President spoke from his desk in the White House. His address, carried by all radio and television networks at 10 p.m., was firm in tone. There was no suggest 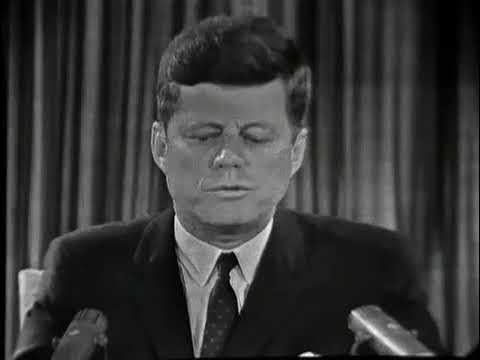 July 24, 1961 - Attorney General Robert F. Kennedy said today there had been a lot of talk but little action to improve the physical fitness of American youth. He said foreign boys and girls consistently outperformed them in physical tests. Mr. Kennedy said that the nation's seven astronauts, all of whom are in top physical condition, will assist the Administration's efforts in this area. They will make 30-second radio and television recordings to promote the fitness campaign

July 22, 1961 - The Battle of Bull Run, the first great engagement of the Civil War on July 21, 1861, was partly re-enacted today across the rolling fields of the 1,700-acre Manassas National Battlefield Park in Virginia. About 35,000 persons sat in silence as the battle opened with Union troops emerging from the woods to force the Confederates across almost the whole expanse of the main field. The crowd, which was mostly Southern, stirred when faltering Rebels rallied around

President Kennedy Meets with General MacArthur at the White House

July 20, 1961 - General of the Army Douglas MacArthur returned to the White House for the first time in seven years. He said it was good "to feel a part of the current scene." The 81-year-old general, who commanded U.S. forces in the Pacific in World War II and later in Korea, had lunch with President Kennedy, Vice President Johnson, Attorney General Robert F. Kennedy and members of Congress and the Administration. Afterward General MacArthur emerged from the White House wear

July 20, 1961 - President Kennedy today put the Pentagon in charge of a greatly increased program to protect American civilians against the effects of nuclear attack. By executive order, Mr. Kennedy shifted operating responsibility for "a greatly accelerated civil defense effort, including a nationwide fall-out shelter program," from the Office of Civil and Defense Mobilization to the Department of Defense. The President is expected to urge public support for civil defense in

July 19, 1961 - President Kennedy's sharp acceleration of the race for the moon won resounding approval today from a Senate-House conference committee which agreed on the full $1,784,300,000 requested by Mr. Kennedy. Quick passage is expected in the House and the Senate. The President said in a message to Congress in May that "now is the time to take longer strides - time for a great new American enterprise - time for this nation to take a clearly leading role in space achiev

July 15, 1961 - The U.S. launched its ninth Polaris missile submarine today with a warning to Soviet Premier Khrushchev that America "can be pushed too far." Attorney General Robert F. Kennedy, speaking at the launching of the nuclear-powered John Marshall, cautioned Premier Khrushchev against making the mistake of Adolf Hitler of "underestimating the American people." He said that while Mr. Khrushchev was "not a Hitler," the Soviet Premier had described this country as a "dy

July 13, 1961 - About 1,800 enthusiastic foreign-exchange students turned a White House visit into a virtual stampede this morning. A White House policeman said the incident just escaped being serious. President Kennedy inadvertently set off the episode when some of the students surged forward in a pushing, shouting group to shake his hand. The students reacted as if they were movie fans greeting a matinee idol. Several were pushed down, one girl was knocked face down into a
123
4
5