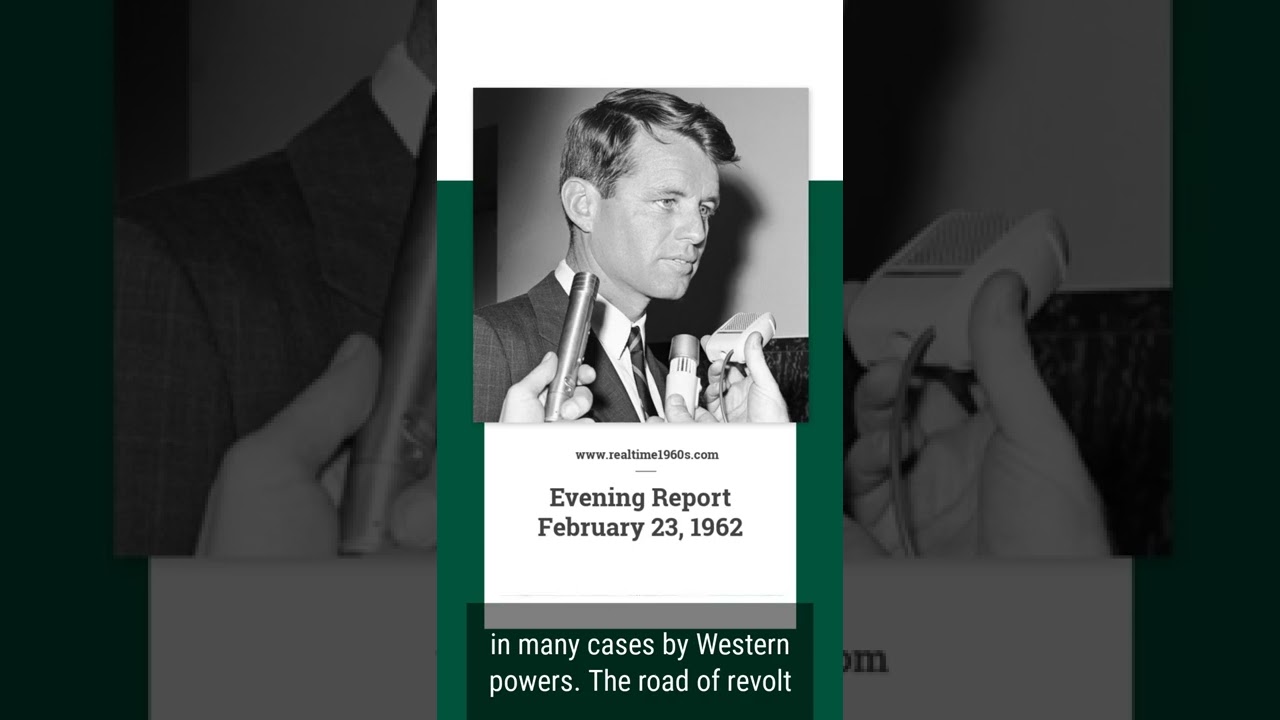 Feb. 21, 1962 - President Kennedy suggested today that the world trip by his brother Robert had been worthwhile because it had helped make foreign students recognize the failures of communism. Robert F. Kennedy, the Attorney General, arrived in Rome yesterday near the end of a four-week goodwill trip that has included spirited debates with university groups in Japan and Indonesia. President Kennedy said at his news conference today that one of the nation’s most serious, 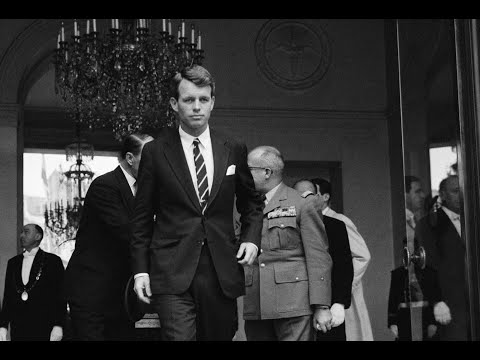 Feb. 25, 1962 - The travels of the Kennedy brothers resulted in a violent denunciation from Moscow today. Attorney General Robert F. Kennedy and Edward M. Kennedy, youngest brother of the President, were assailed by Pravda, the Communist party newspaper, for what were described as “cold war” activities in Berlin. The Pravda attack on the Kennedy brothers reflected Soviet uneasiness over the warm and emotional welcome given to the Attorney General Wednesday and Thursday by Wes

Robert F. Kennedy: Democracy is "Wave of the Future"

Feb. 24, 1962 - Attorney General Robert F. Kennedy (pictured with Mayor Willy Brandt of West Berlin) predicted today that Eastern Europe would be liberated from communism because “the wave of the future is with us.” “We are the new revolution,” Mr. Kennedy told members of the German Foreign Policy Society in Bonn. “We have the truth on our side. If we have the courage, we are going to win.” Later, the Attorney General and his younger brother, Edward M. Kennedy visited an East

Feb. 24, 1962 - Attorney General Robert F. Kennedy told a group of university students in Bonn today that the U.S. would not go to war to reunify Germany. However, in replying to students’ questions, he said an attack on West Germany would be “the same” as an attack on the U.S. He made clear, as he had done in West Berlin, that Washington had no “magic” solution for the Germans’ problems. Earlier, the Attorney General and Edward M. Kennedy, the President’s youngest brother, t

Feb. 23, 1962 - Attorney General Robert Kennedy, on the last day of his official visit to West Berlin, continued to draw large and admiring crowds. This morning, the Attorney General saw Bernauerstrasse, where houses backing up to the western border have had their windows bricked up by the Communists. The Attorney General laid a wreath at the spot where an elderly woman was killed trying to leap to freedom last summer. The West Berliners have erected a memorial there of barbe

Feb. 22, 1962 - Huge and emotional crowds greeted Attorney General Robert F. Kennedy today as he began a two-day visit to West Berlin. He responded later by telling the West Berliners that their freedom would be supported by the “full strength of American power.” An estimated 150,000 people stood in a freezing wind in front of the city hall to see and cheer him. In addition, about 100,000 people were lined up along the streets as he drove from Tempelhof Airport amid snow flur

Feb. 21, 1962 - Even before his arrival tomorrow, Attorney General Robert F. Kennedy has both halves of the divided, troubled city of Berlin excited. The Kennedy visit and the space flight of Lieut. Col. John Glenn Jr. are giving West Berliners the kind of boost they have long been wanting. The talk in West Berlin was all about the President’s brother, described in newspapers there today as “America’s No. 2,” and about the United States resurgence in the space race. Besides W

Feb. 21, 1962 - President Kennedy suggested today that the world trip by his brother Robert had been worthwhile because it had helped make foreign students recognize the failures of communism. Robert F. Kennedy, the Attorney General, arrived in Rome yesterday near the end of a four-week goodwill trip that has included spirited debates with university groups in Japan and Indonesia. President Kennedy said at his news conference today that one of the nation’s most serious, yet s

Feb. 21, 1962 - Attorney General Robert F. Kennedy and his wife, Ethel, were received this morning by Pope John XXIII for a private audience in his private study on the second floor of the Vatican Palace. Mr. Kennedy was received first. Then his wife joined the audience. Both knelt before the Pope as they entered his room and again to receive his blessing at the end of the 25-minute audience. Mr. Kennedy said he had found the Pope in good health and “very kind and cheerful.”

Feb. 20, 1962 - Attorney General Robert F. Kennedy and his party received a warm welcome today from a small crowd at the Rome airport this morning when they arrived from Beirut for a private two-day visit. Mr. Kennedy later received a message from Secretary of State Dean Rusk congratulating him on the success of his current trip around the world. Mr. Kennedy then spent several hours revising speeches he is to make Thursday and Friday in Berlin and West Germany. Tomorrow, Mr.

RFK: We Will Win in Vietnam

Feb. 18, 1962 - Robert F. Kennedy said today that U.S. troops would stay in South Vietnam until Communist aggression was defeated. The Attorney General said at a brief news conference at Saigon Airport: “We are going to win in Vietnam. We will remain here until we do win.” Mr. Kennedy did not leave the heavily guarded field during a two-hour stop on his flight from Jakarta to Bangkok. He said he wished he could have stayed in Vietnam longer. Asked whether the U.S. was involve

RFK in Bandung: "American Plane Got Me Here, Russian One Didn't"

Feb. 17, 1962 - Robert F. Kennedy made political capital today of his misadventures in a Soviet-built transport plane. The plane, an Ilyushin-14, could not get through some bad weather on a flight from Bali to Bandung yesterday. It made one emergency landing and then put in at Jakarta, where the Attorney General spent the night. The American-built Convair plane carrying the press had no difficulty reaching Bandung. Early this morning, Mr. Kennedy finally reached Bandung in a

Feb. 17, 1962 - Attorney General Robert F. Kennedy found himself in the center of a Texas twister last night because of an impromptu 22-word opinion he gave on the war between the United States and Mexico, 1846-48. “Some from Texas might disagree,” the Attorney General told a student in Indonesia on Wednesday, “but I think we were unjustified. I do not think we can be proud of that episode.” As Mr. Kennedy foresaw, “some from Texas” do disagree. Tempers are boiling from San A

Feb. 10, 1962 - Attorney General Robert F. Kennedy arrived today in Hong Kong, a British colony in the shadow of Communist China, for a two-day rest. But he showed no sign of slackening the pace he maintained during his hectic six-day visit to Japan. At a news conference, the Attorney General painted a relatively rosy picture of the world, saying the Communists had more problems than the West and “there is great promise for us.” The Communist wall in Berlin, he said, is an in

Feb. 9, 1962 - Attorney General Robert F. Kennedy faced the startled chief of Japan’s massive left-wing labor union today and challenged him to visit the U.S. and find out for himself whether it was really an “imperialist” land of “monopoly capital.” “Come and see,” urged Mr. Kennedy, waving a finger at the labor leader. “Give us a fair shake!” Across the table sat Akira Iwai, 39-year-old secretary general of Sohyo, a national union of 4 million members. Sohyo, affiliated wit

Feb. 8, 1962 - Left-wing students boycotted a scheduled meeting with Robert F. Kennedy (pictured left at a karate demonstration) today in Kyoto. The U.S. Attorney General promptly charged them with lacking the courage to debate. “I don’t think it’s very courageous,” he told other students at a discussion session, “to denounce someone from a distance and not be willing to meet him face to face. It’s no good to retreat within a cell, exchange views only with those who agree wit

Feb. 7, 1962 - Robert F. Kennedy toured Western Japan today as if he were running for county sheriff. The Attorney General talked with housewives, tickled babies under the chin, and shook hundreds of hands. He visited a factory, a school, a town hall, and a Buddhist temple. Mr. Kennedy’s party traveled through a half-dozen small towns in a caravan of buses reminiscent of an American campaign tour. Tonight, the Kennedys ran into a Leftist demonstration when they arrived in Kyo

Ethel Kennedy Shops in Tokyo, Buys Seven of Everything