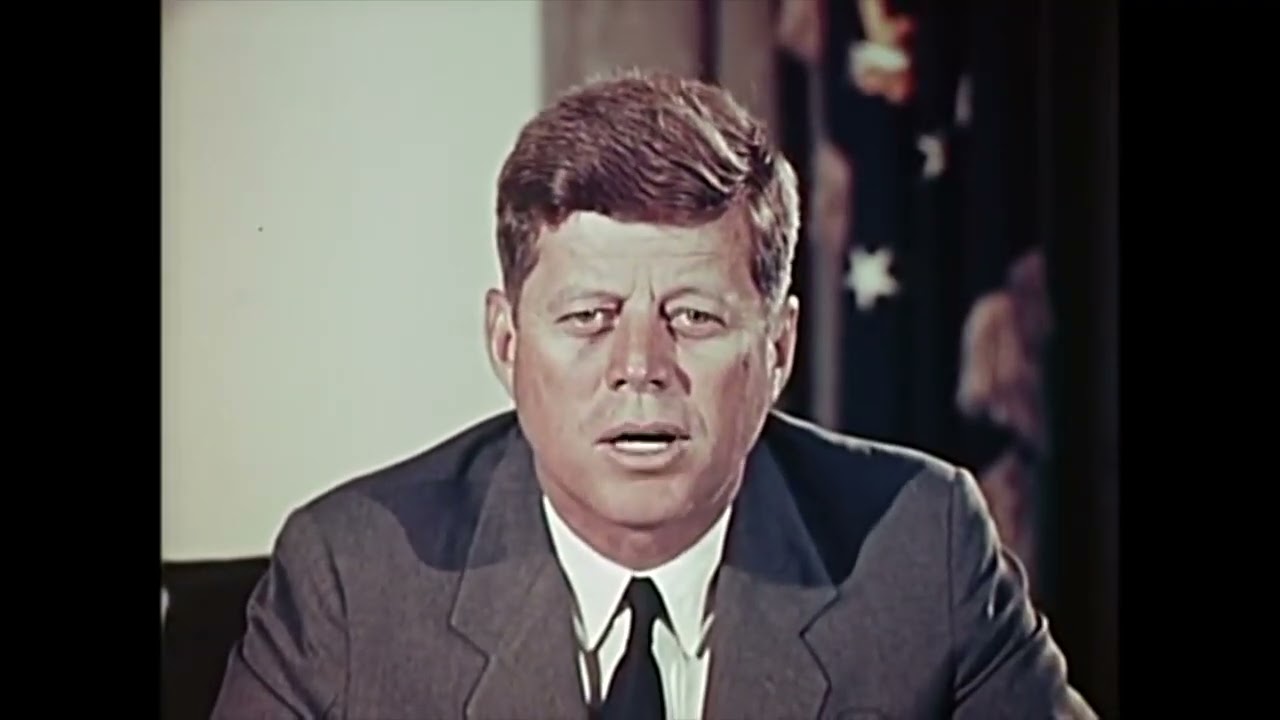 Dec. 28, 1962 - The main difference between astronauts and most of the rest of us is they know how to control their anxieties — in fact, they perform best when the stress is greatest. “They are not men who know no fear. They just happen to know how to keep feelings blocked out of their professional function as pilots,” Dr. George Ruff, the astronauts’ psychiatrist, declared in Philadelphia today. After giving the astronauts tests for more than three years, Dr. Ruff and Dr. Sh 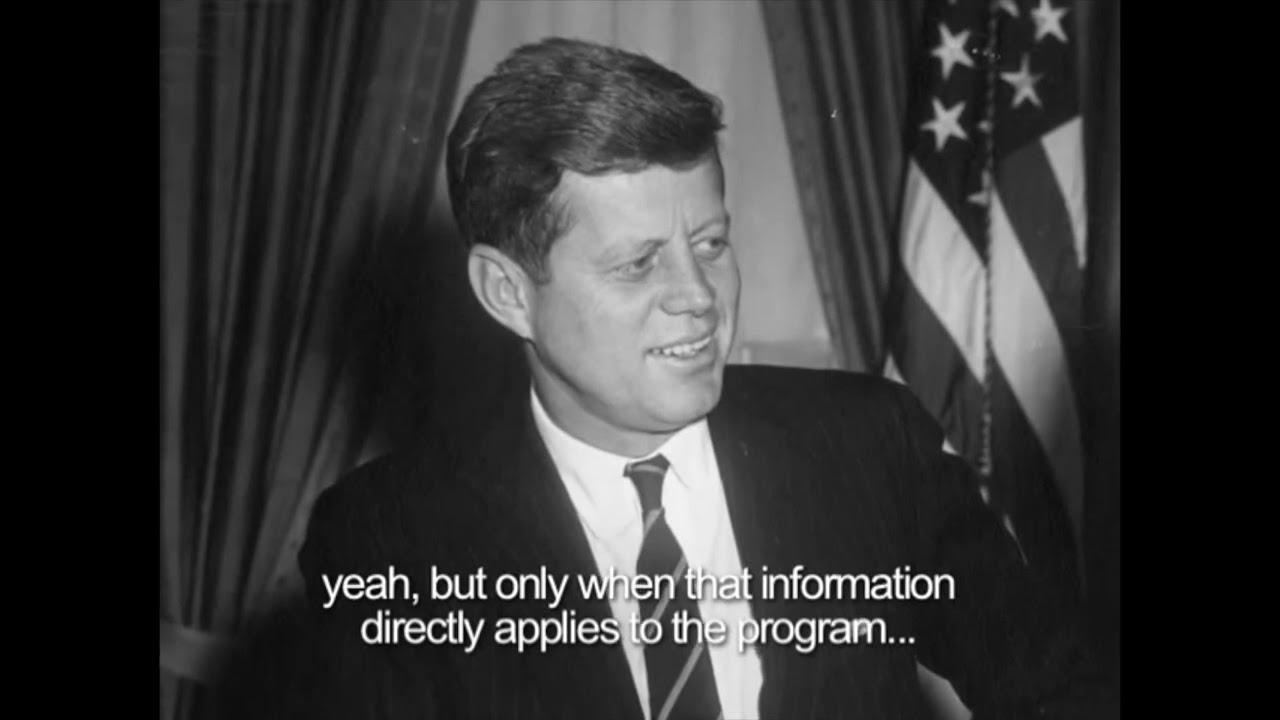 Nov. 21, 1962 - Here is a recording of a meeting today between President Kennedy, NASA Administrator James Webb, and Jerome Wiesner, Special Assistant to the President. The President states clearly that his Administration’s priority is for the U.S. to land on the Moon before the Soviet Union. #JFK #NASA

Nov. 21, 1962 - The fact that Major Virgil I. Grissom (right) has been in outer space does not excuse him from paying a traffic fine for speeding, Jackson County Judge Julian Laramore said today in Marianna, Fla. Judge Laramore said he had issued a warrant for Major Grissom’s arrest after the astronaut had failed to mail in a $20 fine. “He was to appear in court Nov. 3, but he telephoned Nov. 2 and said he wanted to settle the case,” the judge said. “I advised him to mail in

Nov. 13, 1962 - Maj. Gordon Cooper, the only eligible Mercury astronaut who has not yet been rocketed into space, has been named for the next Mercury flight. The flight, probably the last of the series, is scheduled for April, NASA said in its announcement today. The plans are for the 35-year-old Air Force pilot to circle the earth for one full day, making about 18 orbits. That would be three times the duration of the longest U.S. flight to date — the six-orbit trip made on O

Nov. 5, 1962 - Enos, the first chimpanzee to orbit the earth in a U.S. space capsule, died of dysentery yesterday, the Air Force said today. Veterinarians said his death was in no way related to the orbital flights he made last Nov. 29. An autopsy is to be performed at the Holloman Air Base aeromedical laboratory in an effort to determine why Enos did not respond to antibiotic treatment for a bacterial infection of the intestinal tract. He had been ill two months. Ham, a chim

Oct. 16, 1962 - President Kennedy played host in his office today to Comdr. Walter M. Schirra Jr., the six-orbit astronaut’s wife, and their two children. The President, sitting in his rocking chair, swapped small talk with the youngsters and discussed with the 39-year-old commander his nine-hour spaceflight. Commander Schirra enjoyed celebrations in Honolulu and in Houston, Tex., where he now lives, and he received a wild confetti ride through a string of towns in his native 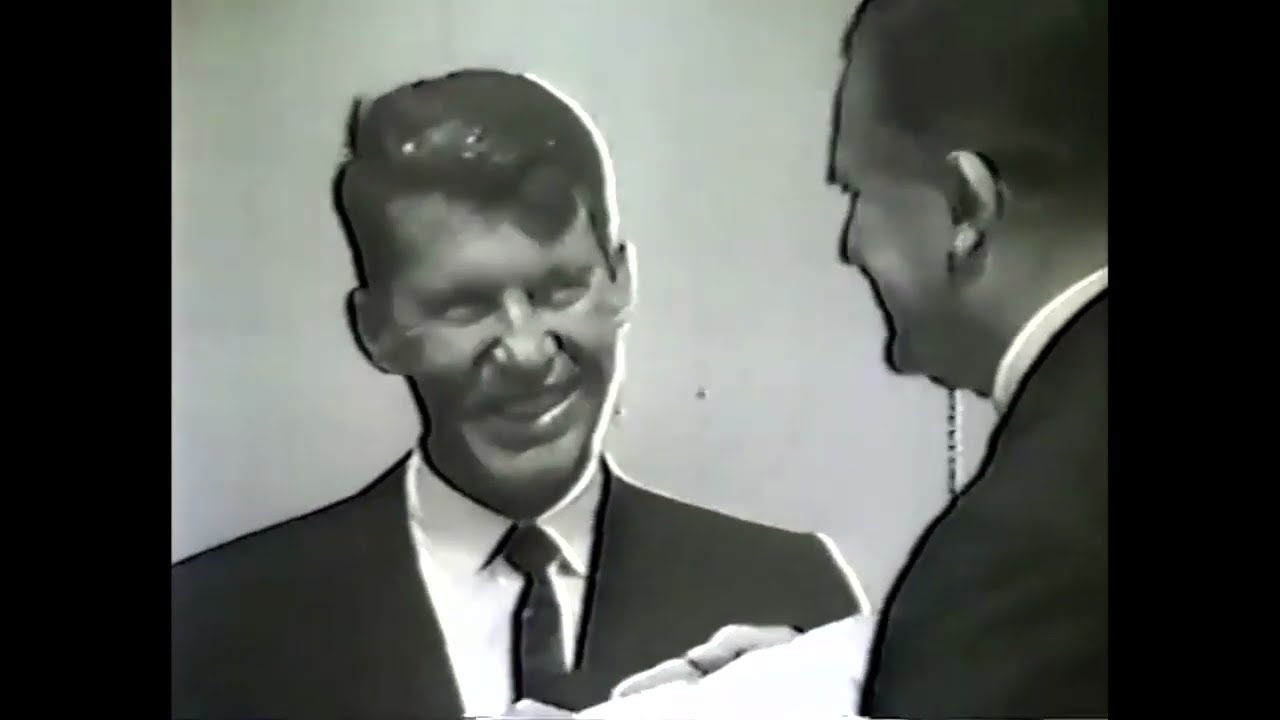 NASA: Gordon or Shepard to Make Next Orbital Flight

Oct. 7, 1962 - A NASA official said today that the astronaut for the 18-orbit, one-day Mercury flight in early 1963 could be either Comdr. Alan B. Shepard or Maj. L. Gordon Cooper (pictured). The aide, who declined to be identified, said the officials were leaning toward Comdr. Shepard. If picked, the 38-year-old Navy test pilot would be the first American to make a second rocket journey. None of the Soviet spacemen has made two flights to date. Commander Shepard flew this na

Oct. 3, 1962 - Commander Walter M. Schirra Jr. flew six orbits around the earth today, twice as far as the two Americans who had orbited before him. The 39-year-old astronaut made a bullseye landing in the Pacific Ocean within four miles of the carrier Kearsarge, stationed near the planned recovery zone. He was picked up, still in his capsule, by the Kearsarge. The impact point was about 330 miles northeast of Midway Island. Commander Schirra had traveled 160,000 miles in 9 h

Sept. 20, 1962 - A resolution endorsing the use of force, if necessary, to prevent the spread of Cuban Marxism in the Western Hemisphere was adopted by the Senate today, 86-1, after 3 hours of discussion. The House of Representatives, whose Foreign Affairs Committee unanimously approved an identical statement this morning, is expected to adopt the resolution tomorrow and send it to President Kennedy. The joint resolution expresses the determination of the U.S. to use any mean

Sept. 19, 1962 - The Senate passed the Administration’s foreign trade bill today and thus capped for President Kennedy his biggest victory of the 87th Congress. A surprisingly lopsided vote of 78-8 gave convincing emphasis to the extent of the triumph. It also evidenced a sharp decline in protectionist sentiment in Congress and the country. The measure carries out in full the President’s recommendations for extensive new tariff-cutting powers to provide an effective bargainin 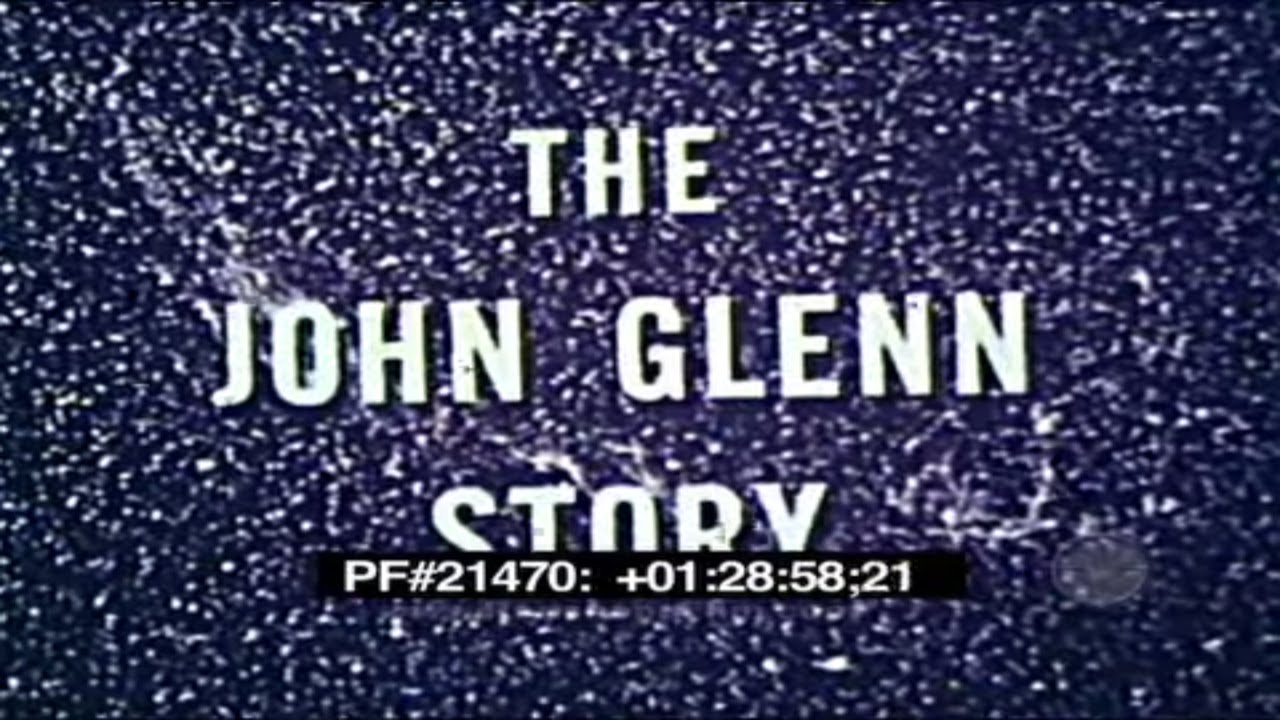 Sept. 17, 1962 - Nine new astronauts, candidates for the lunar space flight, made their debuts in Houston today. Two civilians were among the group, which also includes four Air Force officers and three Navy officers. They will be assigned, along with the seven astronauts of the pioneer Project Mercury, to train for Project Gemini, which calls for a space rendezvous by two manned capsules early in 1964, and for Project Apollo, the landing on the moon scheduled for late this d

Armstrong One of Nine New Astronauts Picked by NASA

Sept. 14, 1962 - Neil Armstrong, a 31-year-old civilian who has been flying X-15 research planes, was reported today to be one of 9 new astronauts picked by NASA. Mr. Armstrong, as a space-agency employee, has taken the stub-winged X-15 to speeds of 4,000 miles per hour and altitudes of 40 miles. The new pool of space pilots will be “candidates” — officials stress the word — for flights in two-man Gemini and three-man Apollo capsules. The Apollo craft are scheduled to land on 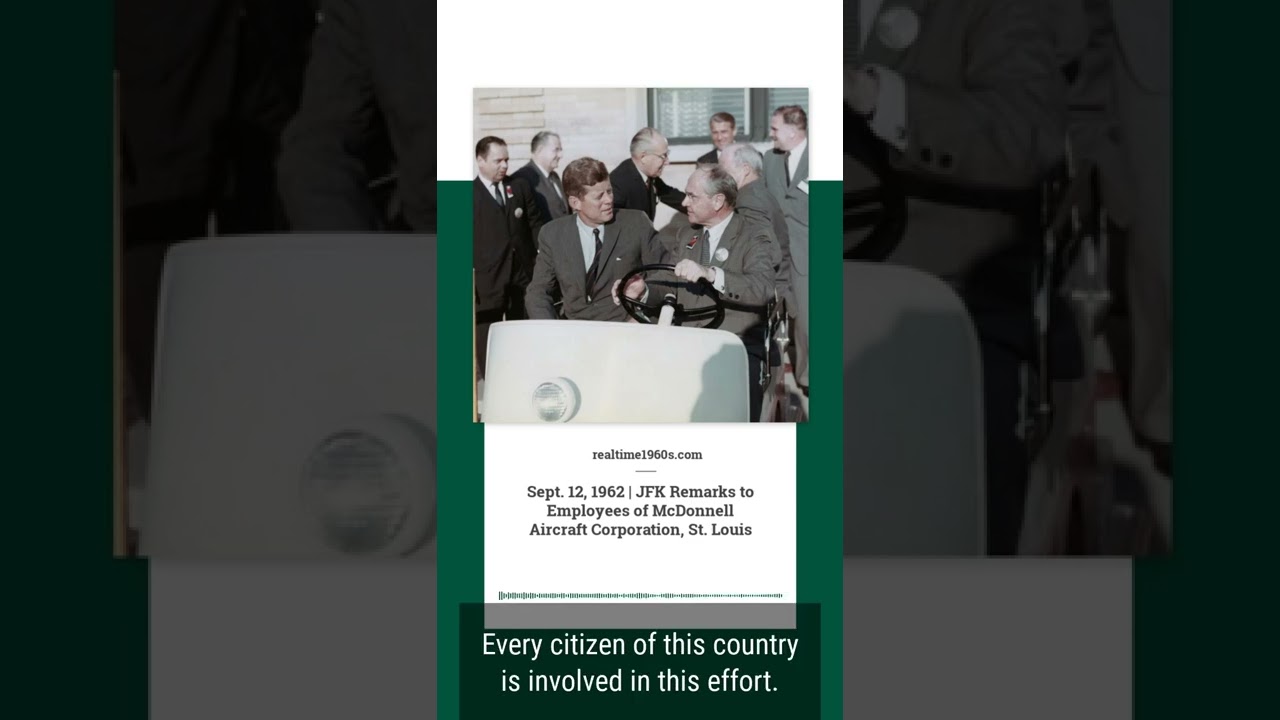 Sept. 12, 1962 - Here are President Kennedy’s remarks today to employees of the McDonnell Aircraft Corporation at Lambert Field in St. Louis. In his speech, the President thanks the workers for their contributions to the nation’s space exploration efforts. #NASA #JFK #space 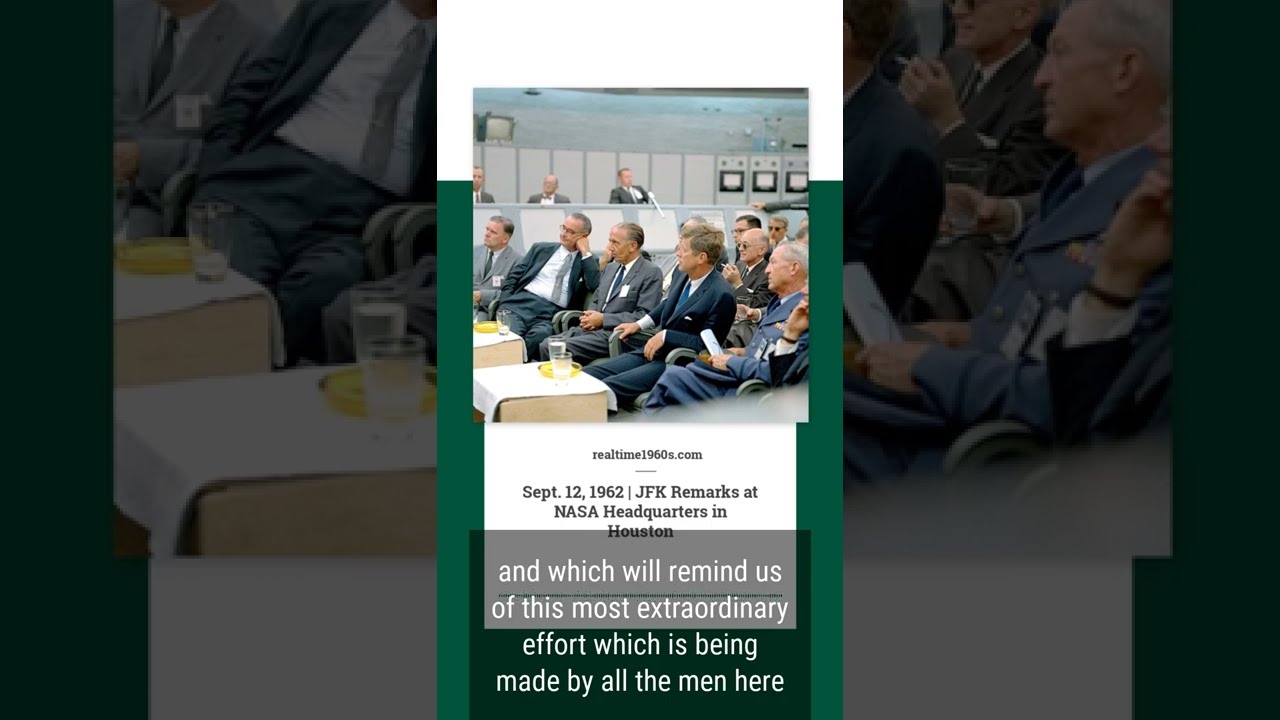 Sept. 12, 1962 - Here is a recording of President John F. Kennedy’s remarks at the Rich Building of NASA's Manned Spacecraft Center in Houston, Texas concerning the rapid achievements made by the country’s space exploration program in recent years and its future projects. #NASA #space #moon #JFK

Sept. 12, 1962 - President Kennedy said today that “no nation which expects to be the leader of other nations” can afford to lag in the exploration of space. In a speech under a broiling sun this morning at Rice University Stadium in Houston, the President declared: “Those who came before us made certain that this country rode the first waves of the industrial revolution, the first waves of modern invention, and the first wave of nuclear power. This generation does not intend

Sept. 11, 1962 - President Kennedy stopped in Houston, Texas tonight on his two-day tour of four space installations. He was greeted at International Airport by a crowd estimated at 10,000. The crowd later swelled to 25,000, and police estimated that an additional 175,000 lined the route of the President’s motorcade into the city. Mr. Kennedy’s trip began with a stop at the George C. Marshall Space Flight Center at Huntsville, Ala., this morning. He was assured there by Dr. W 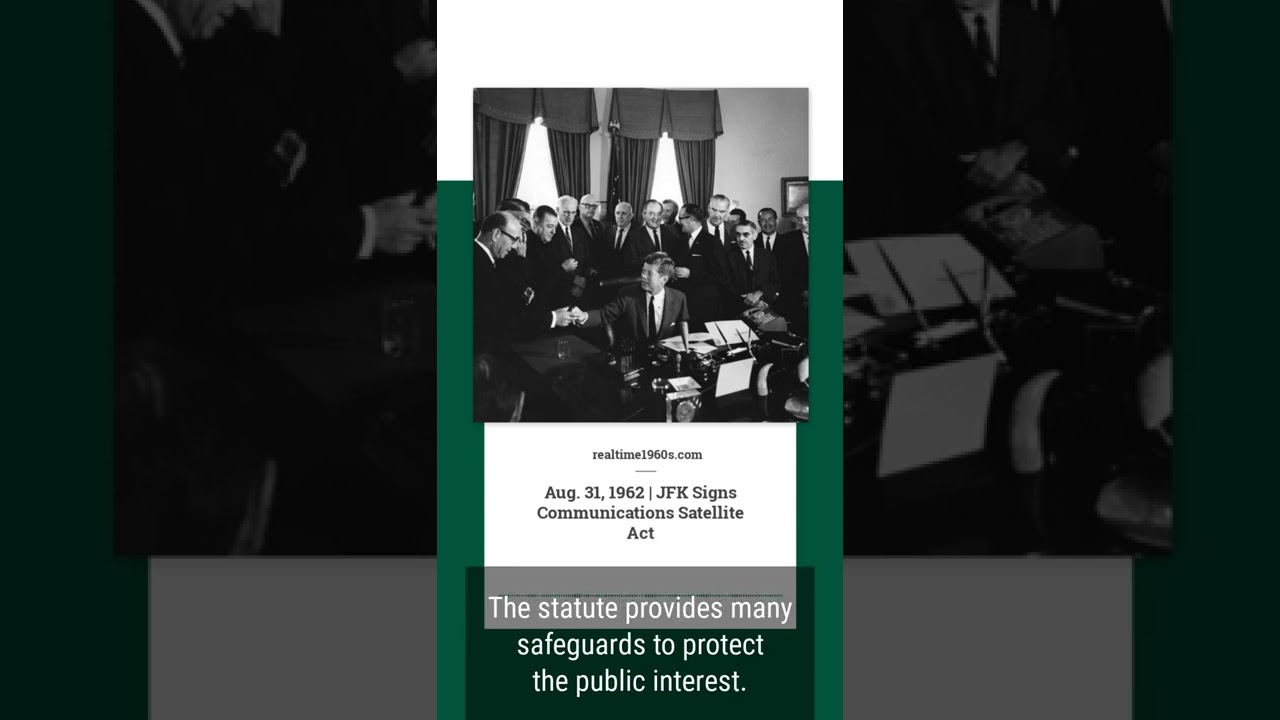