June 22, 1962 - Mrs. Mamie Eisenhower came back to the White House today and saw for herself that her successor had been moving things around. Mrs. Eisenhower and Mrs. Kennedy had tea and discussed plans for the proposed National Cultural Center, of which they are honorary co-chairmen. The two women were joined for tea by Mrs. Kennedy’s mother, Mrs. Janet Auchincloss of McLean, Va.; Robert Montgomery, the actor, and other leaders of the cultural center project. This was Mrs.

May 8, 1962 - The world’s largest submarine, the U.S.S. Lafayette, slipped smoothly into the Thames River in Groton, Connecticut today, christened in both French and English by Mrs. Jacqueline Kennedy. Mrs. Kennedy swung the bottle of champagne against the nation’s newest submarine seconds after the countdown ended with the word “Launch.” “I christen thee Lafayette,” she said softly. Then she added, “Je te baptise Lafayette.” As the bottle crashed against the bow, a few drops 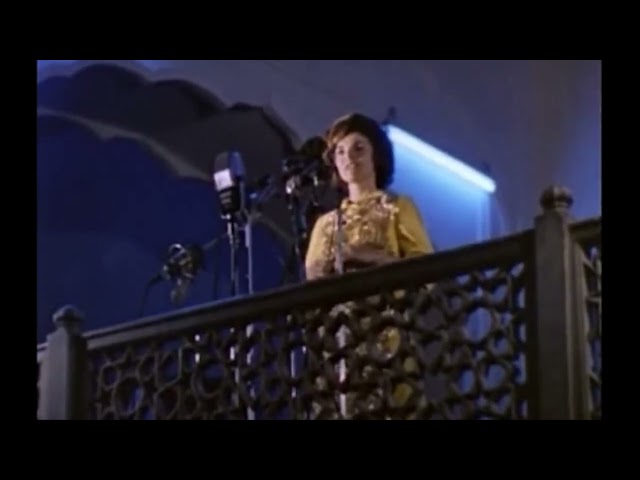 Mar. 22, 1962 - Here is video of the First Lady speaking at the Shalamar Gardens in Pakistan. #JFK #FLOTUS #history #OTD

First Lady Will Be Focus of NBC-TV Documentary

Feb. 22, 1962 - Mrs. Jacqueline Kennedy will be the subject of a documentary to be televised by NBC on Sunday, March 25, from 9 to 10 p.m. It will be produced with the approval of the White House. The major portion of the program, entitled “The World of Jacqueline Kennedy,” will depict her days as the First Lady. Executive producer Donald B. Hyatt said earlier events to be covered would include her childhood and young womanhood in New York and East Hampton, L.I., her marriage

Feb. 21, 1962 - Chrysanthemis Papacosis, an 11-year-old Greek girl, and Mrs. Jacqueline Kennedy, who had the child brought to this country to undergo a delicate heart operation, met in Washington today. They sat together and posed for photographs on the first floor of the White House. The girl was brought to the White House from Walter Reed Hospital, where she underwent surgery on Feb. 1. She was accompanied by her father, Spiridon, a farmer. The child was taken on a conducte

Feb. 16, 1962 - Foreign television executives from Communist Hungary to Japan are regarding the TV White House tour with Mrs. Jacqueline Kennedy as a potential hit show, sight unseen. Since the show was televised Wednesday night with an estimated total of 46,550,000 American viewers looking on, CBS has been asked to supply prints to 14 nations interested in buying it for their own stations. When the show was made, Mrs. Kennedy delivered introductions about one minute in lengt

Feb. 15, 1962 - Mrs. Kennedy’s televised tour of the White House Wednesday night was watched by 46,550,000 persons, according to survey results issued today by the American Research Bureau. The program was watched by three of every four persons who viewed television between 10 and 11 p.m. ABC, which earlier had declined to join the two other networks in televising Mrs. Kennedy’s program, reversed its position today. James C. Hagerty, vice president of news, said the tape-reco

Feb. 14, 1962 - Millions of television viewers toured the White House this evening with Mrs. Jacqueline Kennedy leading the way. The President’s wife explained the restoration she has made in the interior of the Executive Mansion. In the hour-long program, recorded on tape last month, Mrs. Kennedy, a poised TV narrator, was a historian savoring the small facts and human story behind the evolution of White House décor. Wearing a wool suit of simple line and three strings of pe 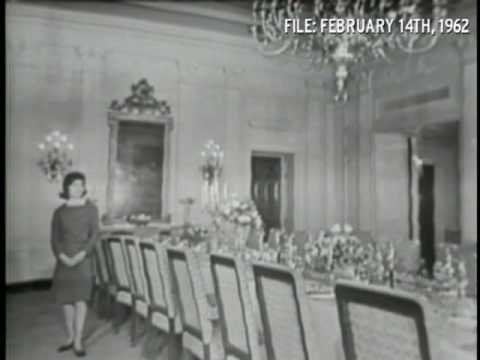 Feb. 7, 1962 - Teenagers from 64 countries crowded into the White House today for an afternoon of Mozart with ice cream, cookies, and milk. The presentation of Mozart’s comic opera, “Cosi fan tutte,” to children of foreign embassies in Washington was Mrs. Jacqueline Kennedy’s idea. Mrs. Kennedy, with daughter Caroline as co-hostess, welcomed the 234 teenagers for an afternoon of fun and music. Mrs. Kennedy entered the East Room of the White House just before the lights were d

Greek Girl, a Friend of the First Lady, Undergoes Heart Surgery in Washington

Feb. 1, 1962 - A 10-year-old Greek girl (pictured left) befriended by Mrs. Jacqueline Kennedy underwent heart surgery in Washington today. She is doing as well as doctors could have expected, the White House said. The story of Chrysanthemis Papacotsis was brought to Mrs. Kennedy’s attention while the First Lady was in Greece last spring. The child was born with a heart defect. Mrs. Kennedy arranged for Chrysanthemis to be brought here with her father, a farmer, in an Air Forc

Sept. 27, 1961 - The First Lady will present the new President's Cup in a special open-jumper class at the Washington National Horse Show in October. The White House made the announcement today. The show will be held at the National Guard Armory Oct. 24 to 29. A special Presidential box will be set up on the arena sidelines. The President may attend. Mrs. Kennedy will view the finals of the event. She is known for her interest in horses and riding. #JFK #americanhistory #ushi