Feb. 19, 1962 - Defense Secretary Robert S. McNamara said today that the South Vietnam war “seems to be stabilized,” but that guerrilla fighting could continue in the Southeast Asian nation for years. Mr. McNamara issued a written statement after talks with 22 military leaders and diplomats summoned to Hawaii from Washington and Vietnam. The Secretary called the Vietnam fighting “a long and hard struggle because it is not full-scale warfare but guerrilla warfare.” “We must be

Feb. 19, 1962 - Senator Barry Goldwater praised Secretary of Defense Robert S. McNamara today as “one of the best Secretaries of Defense ever — an IBM machine with legs.” The Arizona Republican said Mr. McNamara had set up an “excellent” budget system in drawing up his $50 billion defense budget. The Senator did not refer to Mr. McNamara’s recent troubles with a Senate committee over refusing to disclose the names of Pentagon censors who made specific changes in speeches by m

Nina Khrushchev Pleads for Disarmament in Message to American Women

Feb. 18, 1962 - Mrs. Nina Petrovna Khrushchev (pictured with the First Lady last June in Austria), wife of the Soviet Premier, pleaded for international understanding and complete disarmament today in a short-wave broadcast addressed to the women of America. Speaking in accented but good English, Mrs. Khrushchev said she was responding to “letters and cables” she had received from women in the U.S. She said that the writers had shown great concern about preventing war and tha

Feb. 18, 1962 - A pamphlet contending that any national shelter program would be almost useless has been issued by eight specialists who teach at Columbia University, Hofstra College and Amherst College. “A National Shelter Program: Its Feasibility and Its Cost” is a challenge to Federal plans for meeting the dangers of a nuclear attack. It speaks of “the near-impossibility of survival.” Professor Otto Klineberg, one of the pamphlet’s authors, holds that shelters are actually

Feb. 17, 1962 - The Republicans charged again today that President Kennedy was hiding the extent of U.S. involvement in South Vietnam. The Democrats replied that the GOP was playing politics with a touchy foreign problem. Senator Kenneth B. Keating, Republican of New York, following up criticism by his party’s National Committee, charged that in South Vietnam a “made-in-Washington smokescreen obscures what is going on, in terms of American commitment and American involvement.

Feb. 17, 1962 - John A. McCone (pictured), the new director of the C.I.A., has begun to rebuild the agency’s high command by putting a career intelligence man in charge of covert operations. He has chosen Richard M. Helms, an assistant director, to succeed Richard M. Bissell as deputy director of plans. Mr. Bissell’s long-rumored resignation and the prospective appointment of Mr. Helms were confirmed today by a C.I.A. spokesman. Mr. Bissell was in charge of the failed invasio

Feb. 16, 1962 - Washington officials predicted today the ultimate defeat of the Communist guerrillas in South Vietnam by the Government of President Ngo Dinh Diem. They conceded, however, that it may take years — without any spectacular victories — before the Government forces, with material help from the U.S., could wear down the guerrillas. They pointed out that it took over 10 years for the British finally to eliminate the Communist guerrilla movement in British Malaya. Th

Feb. 15, 1962 - Frederick E. Nolting, Ambassador to South Vietnam, said today that social, economic and political reforms in South Vietnam could be accomplished quickly if the Vietnamese stopped criticizing the regime of President Ngo Dinh Diem (pictured) and tried to improve it from within. Mr. Nolting seemed to be trying to convince the Government of President Diem that it would enjoy U.S. support through thick or thin. This is in line with the “sink or swim with Diem” them

Feb. 14, 1962 - The French political Left, in parties, unions and civic groups, was exhilarated today by the massive outpouring of people in the streets of Paris yesterday and the generally effective strike staged throughout France. Hundreds of thousands marched in a funeral procession for eight persons killed Feb. 8 during a demonstration against the terror tactics of the Rightist Secret Army Organization (OAS). It was the biggest pro-Left demonstration in years and, after a

Feb. 14, 1962 - State Department authorities said today the U.S. was still trying to get an accounting from Communist China of American troops missing in the Korean War. The inquiries were said to be a regular item in the talks held periodically between the U.S. and Communist Chinese Ambassadors in Warsaw. The State Department says it has no evidence that any of the 389 missing are still alive. But the U.S. position is that the Beijing regime should tell whatever it knows abo

President Says He's Being as "Frank as Possible" on Vietnam

Feb. 14, 1962 - Responding to criticism, President Kennedy said today he was being as frank as possible about U.S. involvement in the war in Vietnam. He asked that such sensitive matters be left to “responsible leaders” of both parties. The President countered charges of excessive secrecy with a statement that no American combat troops “in the generally understood sense of the word” had been sent into Vietnam. Yet he conceded, without giving statistics, that military support

Feb. 13, 1962 - United States destroyer escorts will arrive at Danang in South Vietnam this week to bolster the South Vietnamese Navy’s patrol against Communist guerrilla infiltration by sea. This was made known today as Gen. Paul D. Harkins (pictured center) arrived in Saigon to take charge of the newly created United States Military Assistance Command, which will control the rapidly expanding American military intervention against the Communist guerrillas. Most of the Commu

Feb. 13, 1962 - The Republican National Committee called on President Kennedy today to “make a full report to the American people” on U.S. involvement in the fighting in South Vietnam. In its publication, “Battle Line,” the committee charged that the President had been “less than candid” in his comments on the extent of American support for South Vietnam’s battle against Communist insurgents. The publication raised the question whether the U.S. was “moving toward another Kore

Feb. 11, 1962 - U.S. military personnel on reconnaissance in central Vietnam have run into hostile aborigines, belonging to the Katu tribe, who set traps for them with poisoned arrows. Although the Vietnamese maintain that the Katu are heavily infiltrated with Viet Cong Communist guerrillas, it is extremely doubtful that they are familiar with Marx or Lenin. The Katu are blood hunters who sacrifice animals and humans to appease the spirits. Captives are stabbed to death with

Feb. 11, 1962 - What President Kennedy has called the “increasing ferocity” of the war in South Vietnam and the increasing involvement of the U.S. in it are causing concern in Washington. Officials feel there is a mounting danger that more U.S. servicemen will be killed in what are now openly described as U.S. military operations against Communist rebels in South Vietnam. Last week, a U.S. helicopter piloted by an American was shot down while carrying South Vietnamese supplie 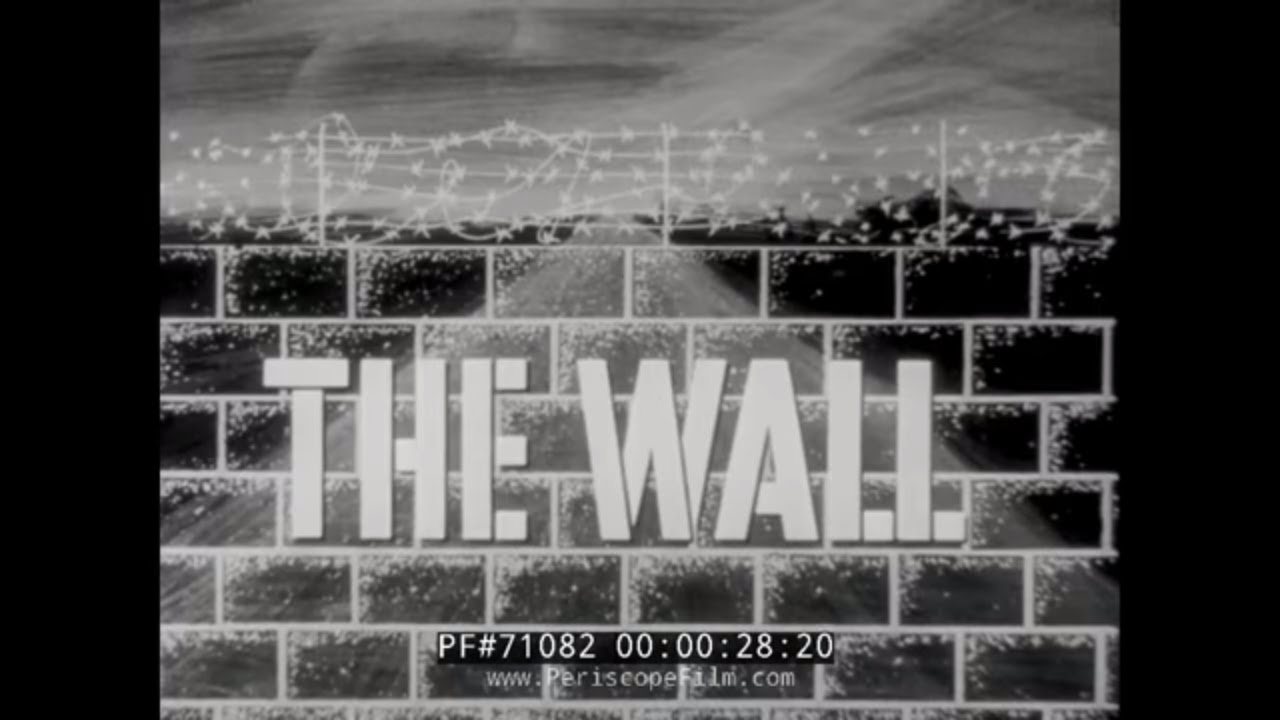 James Cagney Narrates Documentary on Communism "The Road to the Wall"

Feb. 9, 1962 - Narrated by actor James Cagney, "The Road to the Wall" explores the steady march of Communism through the years. It begins with the writings of Karl Marx and tracks milestones up until the construction of the Berlin Wall, which began last August. #Podcast #podcasts #podcasting #podcaster #podcasters #podcastlife #podcastshow #podcastlove #podcastaddict #podcasthost #history #historylover #historybuff #historychannel #HistoryLesson #ColdWar #ColdWarHistory #cold

Feb. 9, 1962 - The decision announced yesterday to set up a new U.S. command in Saigon under a full general is said to be a result of the growing extent of U.S. involvement in support of military operations against the Communists in South Vietnam. The military build-up in recent weeks has produced these developments: - Three U.S. Army combat helicopter companies and a company of light observation planes arrived. Some units were thrown into action almost immediately. - U.S. Na

Feb. 8, 1962 - The U.S. established a new military command in Communist-threatened South Vietnam today and named a four-star general to head it. A primary purpose in creating the command was to manifest the determination of the U.S. to prevent a Communist take-over. The new military headquarters, established with the concurrence of the Government of President Ngo Dinh Diem, is called “United States Military Assistance Command, Vietnam.” Its commander will be Gen. Paul D. Hark

Feb. 7, 1962 - Two U.S. Army air support companies totaling 300 men arrived in Saigon today from the plains of Kansas to bolster South Vietnam’s jungle war against Communist guerrillas. The U.S. Navy aircraft ferry Core landed the men and 21 Canadian-built U-1A Otters — large single-engine planes that can use short, makeshift runways, carry 10 soldiers each, and range about 600 miles. The new units, which have been based at Fort Riley, Kan., were identified as the 18th Aviati

Feb. 6, 1962 - One U.S. Army helicopter crashed and burned, and two others were hit by Communist Viet Cong guerrilla fire today on an American-supported combat mission ferrying South Vietnamese troops into action. There were no American or South Vietnamese Government military casualties. “It was another miraculous escape for us,” said an American military source who was part of the mission. The operation involved 15 U.S. Army helicopters. U.S. military authorities in Saigon t
23
4
56